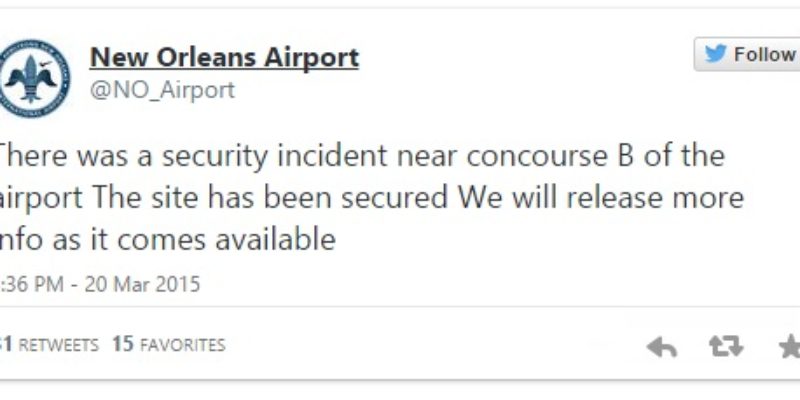 According to the New Orleans’ Louis Armstrong Airport in Jefferson Parish, there was a shooting near concourse B of the airport.

Since, the New Orleans Airport has said that it has the situation under control. More information will be available as details emerge from the Jefferson Parish Sheriff’s Office.

Check back with the Hayride later to get the full story.

Updated: According to the LA Times, at least one person has been shot. Additionally, a spokesperson with the airport said the shooting occurred before 6:30 p.m.

Updated: A Boston Globe reported who was at the scene of the shooting said police shot a man after he allegedly stabbed two people with a knife in the security line. 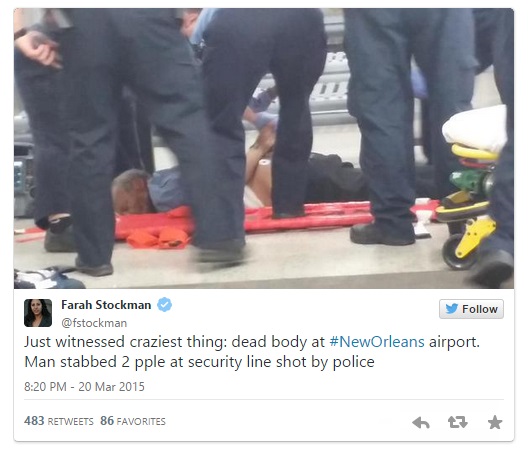 Updated: KLTV7 is reporting that stabbing suspect has been identified as 63 year-old Richard White and he is currently unresponsive (as of 20 minutes ago) after being shot by law enforcement for charging through TSA, spraying agents with wasp spray, and then allegedly hitting a female TSA agent with a machete. 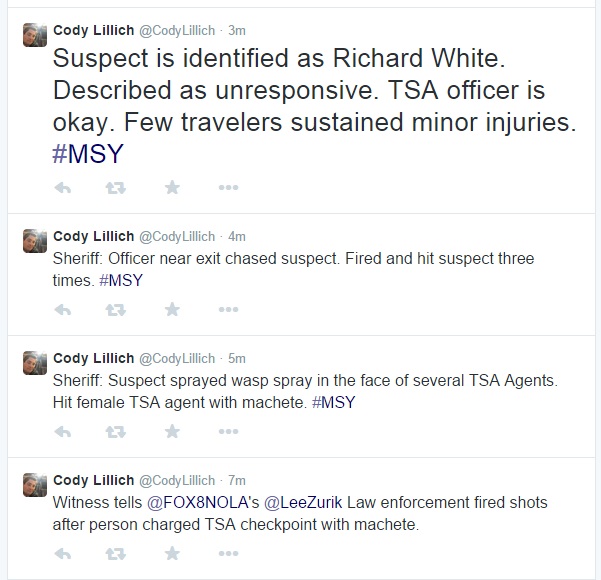 Updated: The shooting/stabbing incident took place in concourse B of the airport, which is where Southwest Airline flights generally arrive and depart, via FOX8. Roughly 41 percent of flights go through concourse B.

Updated: Here is a photo from a bystander of the shooting via Twitter. The photo depicts the machete used by White in the incident. To the right of the photo is the female TSA agent who was hit with the machete. 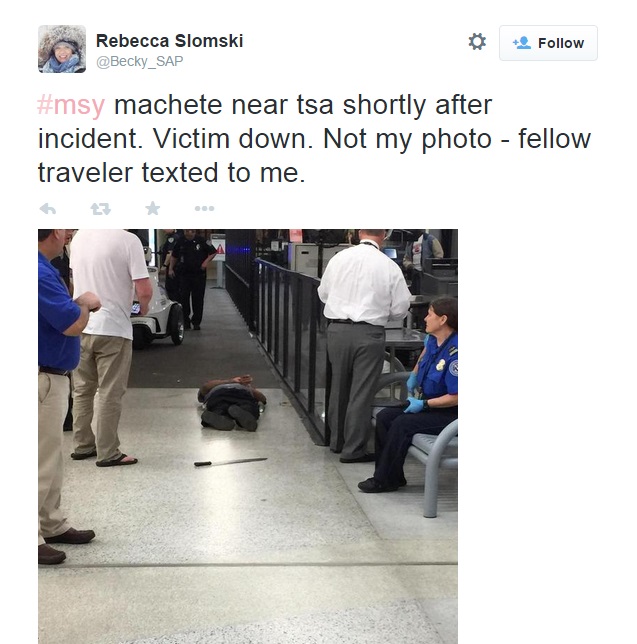 Updated: A bystander during the shooting incident has a graze wound, while others sustained non-life-threatening injuries, according to FOX8. White was apparently shot in the face and chest by law enforcement. White was a cab driver who most recently got his chauffeur’s license.

Updated: “The airport departure ramp is lined with law enforcement vehicles. The airport exit from Interstate 10 is closed. Travelers should expect flight delays,” via FOX8.

Updated: Here’s a photo via Twitter of the alleged stabbing suspect, who remains unconscious: 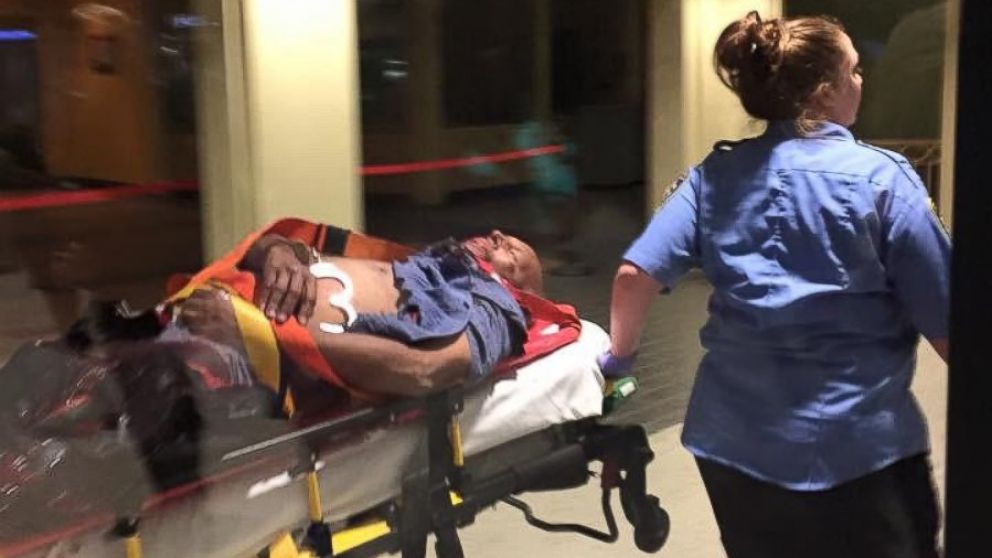 Updated: Mayor Mitch Landrieu tells press that concourse B of the airport will most likely be full-functioning and open tomorrow, according to FOX8’s Lee Zurick. Southwest Airlines will use concourse C for now.

“The situation at Louis Armstrong International Airport is under control and the airport is secure,” Landrieu said in a statement. “There is no threat to the public at this time, and the airport is returning to normal operations. We expect Concourse B – where the incident occurred – to fully reopen tomorrow.”

“TSA agents, law enforcement officers and airport officials all acted quickly to stop the perpetrator and secure the scene,” Landrieu said. “Our thoughts are with our security officials injured in the line of duty, and we wish them a full and speedy recovery.”

“Passenger safety is the number one priority at Louis Armstrong International Airport, and we will continue to closely monitor the situation.”

Updated: 63 year-old Richard White, the stabbing suspect shot by law enforcement, is reportedly alive and in surgery according to FOX8.

Updated: Richard White’s vehicle has been found by New Orleans law enforcement and are processing it out of caution, via NOLA.com’s Heather Nolan.

Updated: Another photo, via Mashable, from the scene hours ago at the New Orleans Airport: 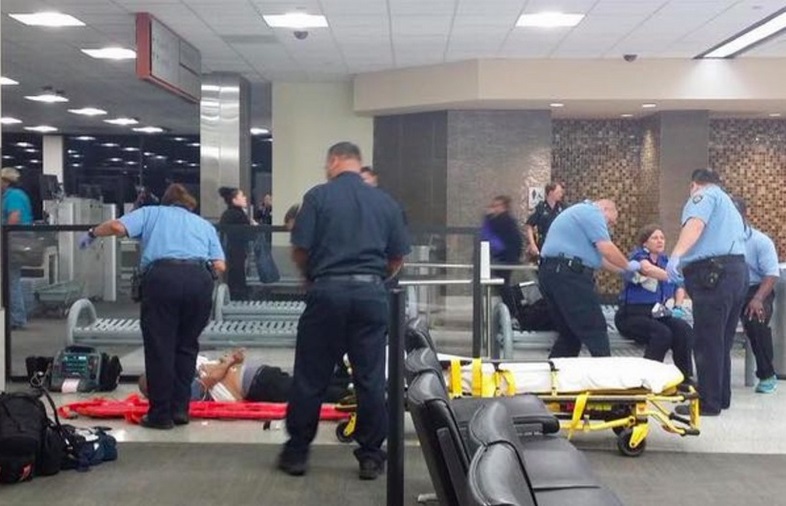 Updated: There have been many media outlets questioning why TSA agents were not able to stop the machete-wielding suspect. However, despite false media reports, TSA agents are not armed.

Updated: New reports on the attacker and potential motives via The Advocate:

— Bag that White had in security checkpoint area was found to have six half-pint mason jars with cloth wicks into gasoline; known as Molotov cocktails; BBQ lighter found in bag too along with plastic letter opener, crushed powder, green fuses which appeared to be crushed smoke bombs.

— White has a mental illness. His family has been cooperative with the Jefferson Parish Sheriff’s Office.

Updated: Richard White, the machete attacker suspect, was pronounced dead Saturday afternoon. Additionally, reports that a female TSA agent was stabbed during the incident were false, as well as reports that claimed a bystander suffered a graze wound from shots fired at White.

Interested in more national news? We've got you covered! See More National News
Previous Article Why Do Some Facebook Users Think This Strawberry Festival Poster Is Racist?
Next Article SADOW: Tuition Freedom Could Be A First Step To True Higher Ed Reform