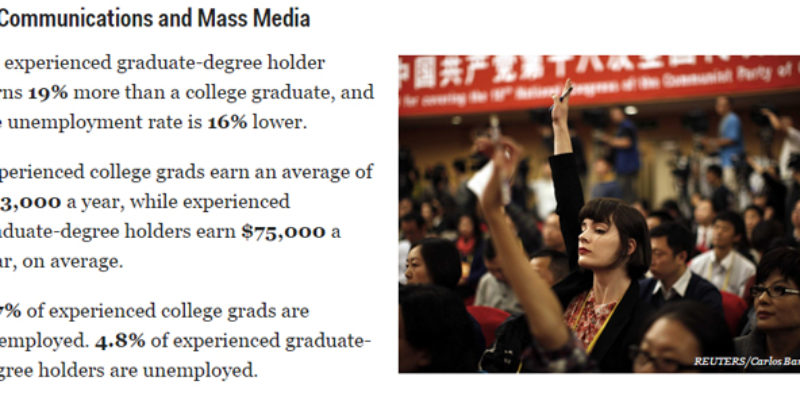 The guess here is most of you won’t be impressed.

First, Business Insider put out their list of the 10 most worthless graduate degrees earlier this year…

In many fields, graduate degrees offer distinct benefits for your extra years in school.

Employees armed with a graduate education are often a more attractive hire and can make a higher salary than colleagues who have only a bachelor’s degree.

However, for some industries the benefits of going to graduate school are comparatively low and don’t justify the extra investment.

Using the recent “Hard Times” report from the Georgetown Center on Education and the Workforce, we examined salary and unemployment data of experienced college graduates and experienced holders of graduate degrees. These are workers whose ages range from 35 to 54.

For roughly 50 fields, we calculated how much more money a graduate degree would bring and the difference in unemployment rates for those with a post-college degree. These figures were then combined to determine which graduate degrees were the most “useless” — basically, which give you the smallest boost in salary and employment.

And when Bankrate.com put out a list in 2012 of five graduate degrees that don’t pay off, one of the five was “PR, advertising and mass-media programs”…

The growth outlook for public relations positions is good, according to the Bureau of Labor Statistics. The field is expected to grow by 21 percent between 2010 and 2020. However, as with the computer engineering industry, hands-on experience is more important than graduate degrees for job seekers. “The graduate degree doesn’t really get you anywhere,” says Weston.

Harris says her clients who need creative and marketing talent aren’t seeking candidates with graduate degrees. “Generally, we don’t get clients looking for an advanced degree unless they’re looking for a higher-level strategy focus,” she says.

In that case, however, they’re typically seeking applicants with a Master of Business Administration, rather than communications-focused degrees. According to the Georgetown study, employees with graduate degrees in advertising and public relations can only expect an earnings boost of 12 percent for their diploma; mass-media students might see an 11 percent increase.

Why do we bring this up? Here’s why… 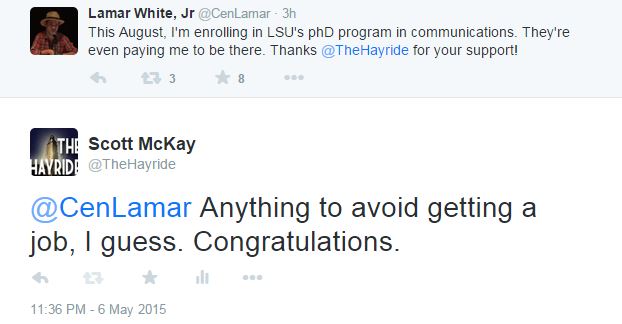 From what we understand, this guy is graduating from the most expensive law school within 1500 miles of his home and now he wants to spend the next four years getting one of the 10 most useless degrees available.

When you don’t actually need to make money you can make decisions like that. Most people would look at it as a waste of time to get a PhD in a field where the established players are dying like dinosaurs and the established ways of doing business are dying along with them, and where the numbers show a lack of any particular justification for a graduate degree, much less a PhD.

The Manship School is home to the nation’s only doctoral program in media and public affairs. We offer a focus on political communication through course study in partnership with the Department of Political Science. Doctoral students may also pursue other avenues of research with a public affairs focus, and can take outside courses from many other schools and colleges including LSU’s internationally acclaimed School of the Coast and Environment. Our doctoral students have pursued research agendas in the areas of political communication, health communication, science communication, race and gender, mass communication and technology, and communication law as they intersect with media and public affairs.  We fund all of our doctoral students for four years ($24,000 per year), and admit only a small class to ensure personal attention and mentorship from faculty. Our acceptance rate is about 15%.  Our doctoral program graduates work at a variety of institutions: research-intensive, teaching-centered, Historically Black Colleges and Universities, and international institutions.

Call us crazy, but what that boils down to for us is “here’s a way to kill four years without having to join the real world, and when you’re through you might even make a career out of staying in college classrooms.”