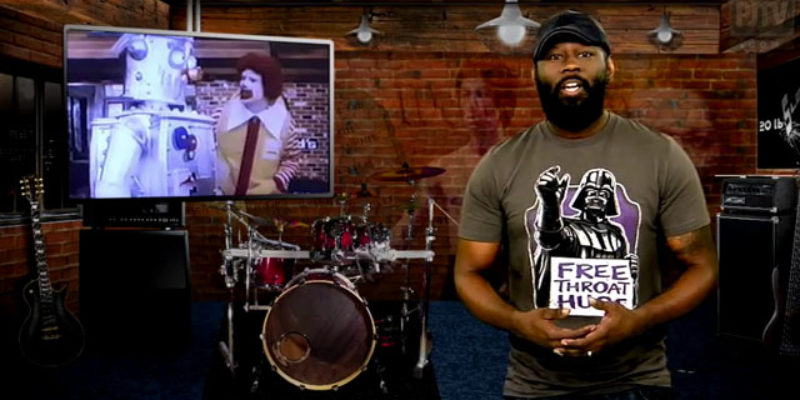 This video is great, and not just because of the terrific Darth Vader “Free Throat Hugs” t-shirt he’s got on.

It’s a good explanation of why the Left won’t shut up about their insane demands for a $15-per hour minimum wage, and what the inevitable effect of that is.

That said, what Zo doesn’t get into in this video is the real reason for all of this agitation for the minimum wage. We’re finding out what that actually is thanks to the unions in Los Angeles, who spilled the beans this week…

Labor leaders, who were among the strongest supporters of the citywide minimum wage increase approved last week by the Los Angeles City Council, are advocating last-minute changes to the law that could create an exemption for companies with unionized workforces. . . .

Rusty Hicks, who heads the county Federation of Labor and helps lead the Raise the Wage coalition, said Tuesday night that companies with workers represented by unions should have leeway to negotiate a wage below that mandated by the law.

“With a collective bargaining agreement, a business owner and the employees negotiate an agreement that works for them both. The agreement allows each party to prioritize what is important to them,” Hicks said in a statement. “This provision gives the parties the option, the freedom, to negotiate that agreement. And that is a good thing.”

Now, in Seattle where the City Council first imposed a $15 minimum wage that is busy laying waste to the restaurant industry, the move to give an exemption to union shops hasn’t happened yet – but it’s only a matter of time.

There is a reason unions like SEIU are the ones pushing a $15 minimum wage. Passage of a $15 minimum wage in and of itself doesn’t do anything for SEIU; if you can make $15 an hour flipping burgers at Wendy’s because that’s the law for everybody there is no particular reason why you’d want to pay dues to SEIU – nobody who flips burgers at Wendy’s is going to be particularly grateful to the union for their advocacy; if they cared or thought much about that kind of thing they’d probably be in a job a little above burger-flipping.

No, SEIU’s (and the other unions’) interest is in establishing themselves as the middle man between businesses who need relief from that $15 minimum wage and the workers they could pay less. And in doing so they’re now management’s best friend. It’s the unions who hold the key to continued existence in business in places like L.A. and Seattle and whatever other leftist-dominated burgs where the $15 minimum wage passes, which gives them a new lease on life.

But here’s the thing – nobody really wants to play in a rigged game. This gambit to put the unions’ fingers around the throats of the restaurateurs and others depending on cheap unskilled labor won’t work for the reason Zo highlights – they’re going to have another option. They can invest in technology and install kiosks instead of order-takers and robots instead of burger-flippers. And there will be a guy making a lot more than $15 an hour whose job will be to make sure the machines are running.

And everybody who currently works at that fast food store is now out of a job, whether they went and joined SEIU or not.

You can’t fight the market. The market is much bigger than morons on a city council, union thugs or protestors in the streets. The market will have its way in time.