It turns out you really don’t have to be “colored” to represent the National Association for the Advancement of Colored People. They’ll bring you on if you’re as white as Hillary Clinton so long as you’d like to pass yourself off as black, no matter how unconvincingly, and you’re suitably Hard Left enough.

Here’s a funny story out of the Pacific Northwest…

Controversy is swirling around one of the Spokane region’s most prominent civil rights activists, with family members saying the local leader of the NAACP has falsely portrayed herself as black for years.

Rachel Dolezal is president of the Spokane chapter of the NAACP, chair of the city’s Office of Police Ombudsman Commission, and an adjunct professor at Eastern Washington University.

The Spokesman-Review reported Thursday that questions have arisen about her background and her numerous complaints to police of harassment. The story was first reported by the Coeur d’Alene Press.

Of course she’s a college professor. You had to know that was coming. What is she an adjunct professor of?

“Africana Studies.” As if there was any doubt.

But this gets even better…

Ruthanne Dolezal said Thursday that she and her daughter have been estranged for years. She says the family background is Czech, Swedish and German — with “faint traces” of Native American. She claims her daughter started to falsely claim she was black eight or nine years ago, after adopting four African-American children.

Asked about her mother’s claims, Rachel Dolezal avoided answering questions about her racial and ethnic background directly, according to the Seattle Times.

The Times said Dolezal answered only by making reference to studies that modern humans first evolved in Africa, saying, “We’re all from the African continent.”

The good liars have an answer for everything. Most of the time their answers are a little better than that.

How about a flourish?

Dolezal is a part-time professor of Africana Studies at Eastern Washington University and serves on a citizen police commission – an appointment she got after identifying herself as African-American on her application.

How about some pictures of this crackpot? 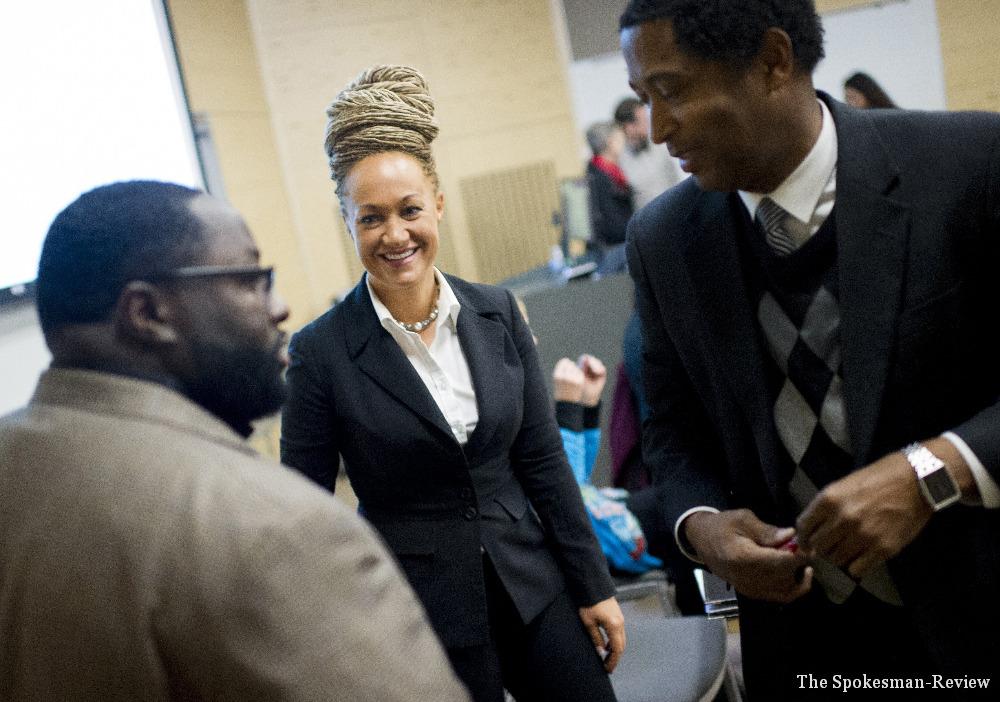 That hair isn’t real. Neither is the fake-bake.

Don’t we usually go to the child pictures when we start talking about victims of racism? Well, here’s one… And in high school… Interracial marriage is OK with us, but here’s the thing – if you’re a white girl and you marry a black guy…it doesn’t make you black. Sorry.

We think back to our friend C.L. Bryant, who was the NAACP president in Garland, Texas several years ago. C.L. didn’t have a problem of qualification for that job like Miz Dolezal does – he’s unmistakably black. And yet he’s not with the NAACP anymore, because when they told him to speak at a pro-abortion rally he declined due to the fact that blacks make up 13 percent of the population of the country and 40 percent of the abortions and he didn’t think the NAACP ought to be promoting what could truthfully be described as genocide against the community. That exercise in individual conscience was enough to finish his career in that organization. But a very obviously white woman who won’t challenge the Bolshevik orthodoxy of the Hard Left/Social Justice mob and in fact gets good at imitating Melissa Harris-Perry? Nobody says a word.

How convincing was the act? Well, here was video when a local TV station interviewed her about hate crimes she’s reported – and she doesn’t do all that well in. Take the Sideshow Bob haircut out of the equation, which we know is very difficult, and she sure comes off as white.

And this part gets even better – because she says she doesn’t “acknowledge” her biological parents, so she’s not white like they are…

As outrageous as this case is, it’s really pretty typical among the Social Justice Warrior crowd. None of these people are authentic in their self-identification as the poor, downtrodden and oppressed redeemers of society – almost all of them come from advantaged backgrounds and what strife they’ve experienced in their lives was entirely self-generated. To make a living and become important they get in on the Social Justice scam, because there’s money in it and the acceptance of lots of other similar escapists, and before long they start believing their own BS.

But at some point we end up finding out the lies and they come crashing down. Which doesn’t stop the Social Justice Warriors from sticking together. Do not be surprised if Rachel Dolezal ends up becoming an even bigger figure than she is now, and not as a figure of ridicule. They’ll hold her up as a symbol of “the struggle.”

UPDATE: Told ya. The NAACP is defending this ridiculous liar…

For 106 years, the National Association for the Advancement of Colored People has held a long and proud tradition of receiving support from people of all faiths, races, colors and creeds.

NAACP Spokane Washington Branch President Rachel Dolezal is enduring a legal issue with her family, and we respect her privacy in this matter. One’s racial identity is not a qualifying criteria or disqualifying standard for NAACP leadership. The NAACP Alaska-Oregon-Washington State Conference stands behind Ms. Dolezal’s advocacy record. In every corner of this country, the NAACP remains committed to securing political, educational, and economic justice for all people, and we encourage Americans of all stripes to become members and serve as leaders in our organization. Hate language sent through mail and social media along with credible threats continue to be a serious issue for our units in the Pacific Northwest and across the nation. We take all threats seriously and encourage the FBI and the Department of Justice to fully investigate each occurrence.