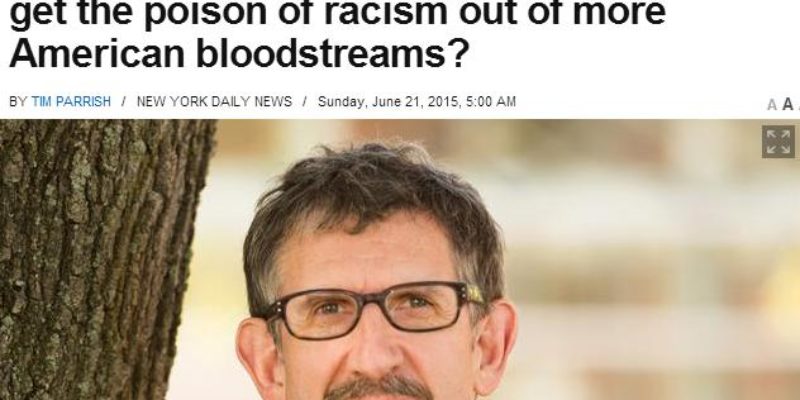 Apparently, Dylann Roof, the mass murderer who took the lives of nine black church-goers in the Charleston, South Carolina shooting, could have been anyone, including LSU alum and famous author Tim Parrish.

In a column for the New York Daily News, Parrish describes how he and some of his friends were born into the same racism that Roof was apparently born into. Here’s an excerpt from Parrish’s piece:

I grew up a Southern racist. I learned how to hate at home and at church. I drank from the same poisonous well as Dylann Roof.

I was raised in Baton Rouge during the 1960s and 1970s, and I believe that grappling with my own racism gives me some insight into how someone comes to loathe those of a different skin color.

But don’t think we wore hoods or burned crosses or physically hurt black people (at least not until later, when I got to high school). My parents were caring and loving. Most of the adults around me were all the clichés used to describe good people: hard-working, God fearing, salt-of-the-earth.

My parents even tried to be respectful when face-to-face with blacks. My mother jerked me out of a department store when, as a 4-year-old, I called a black boy a “jigaboo.” She told me we only used that word in our house; outside, the word was “Negro.” My father harbored a black man in his bunk on the train home from World War II because blacks and Jews were being beaten by roving mobs of white soldiers.

But at the same time, they were afraid that blacks in general “threatened” our values and would be the ruination of white culture, whatever that was. And because of fear and a desire to fit in, I got on board with the escalating racism and violence as my high school naturally desegregated and African Americans moved toward our neighborhood, white flight beginning slowly and becoming a complete migration by the time I graduated in 1976.

There’s just one problem with Parrish’s assertion that he could have been Roof: This is not the 1960’s or the 1970’s.

The idea that Roof is among thousands of other Americans who would have shot up an African American church in the south is preposterous. It is 2015, not a decade in the middle of desegregation.

In Parrish’s assessment, he speaks about how his parents raised him to be a racist. This was in a time period when whites still called blacks the n-word openly in public. This is partly due to a culture that was inherently still bound by racism.

Commercials in the 1960’s and 1970’s featured white families. Hollywood stars were overwhelmingly white. Oprah was not around just yet and there was not even a thought that one day there would be an African-American president.

Fast-forward to Millennial culture and the only n-word’s you will see are coming from rap music from Lil Wayne and Jay-Z. The Millennial generation, by an overwhelming majority, was not born into racism like some previous generations may have been.

In fact, Millennial culture’s biggest accomplishment is diversity. Think about it. In the 1990’s, the Oprah Winfrey Show was huge. And black culture had already made its way into mainstream culture, making rappers like Tupac and Notorious BIG icons.

Millennials were raised in a time period where different races were accepted and even glorified.

Parrish, though, has attempted to compare his racist, 1960’s-1970’s upbringing to Roof’s upbringing. But, how many white supremacist teenagers do you know? How many Facebook photos do you see everyday where a teenager is burning the American flag? Chances are, not many.

Why? Because the Confederate flag does not hold much meaning to us. Our country’s flag, however, is paraded around by Millennials, being featured on t-shirts, in Lana Del Rey songs and on the front of Daisy Duke shorts.

But Parrish would rather us believe that Millennials are no different than his racist upbringing. And that there are tons of Dylan Roof’s out there.

So, essentially, there are tons of white males that will shoot up a black church if they have the chance. Are we actually supposed to believe this?

Roof is nothing like the average Millennial and he does not represent a majority.

He is inherently racist, evil and a white supremacist. The Millennial generation is just the opposite. We are the most diverse, accepting and arguably one of the most rational generations since the Baby Boomers.

This idea that white young people are a threat to blacks because we are taught that blacks want to take over the country is absurd and entirely untrue.

Not only were we never taught this idea, but we also do not anywhere near believe it to be true.

Parrish can try all he wants, but his attempt to blur the lines between past generations’ racism and the current Millennial generation is not all that convincing.

Interested in more national news? We've got you covered! See More National News
Previous Article Low Popahirum, June 22, 2015
Next Article Piers Morgan Finds Another Right He Hates As Much As The Right To Bear Arms