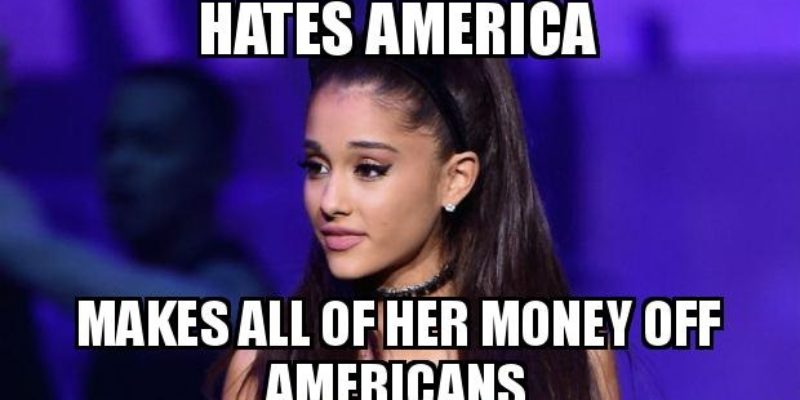 Add pop-star Ariana Grande to the list of Hollywood celebrities that hate America.

Meanwhile, Grande has made her entire career off of Americans, much like the other America-hating celebrities, but do not think for a second that she would be willing to return all of the money she has made to Americans who have bought her auto-tuned pop music.

Nor will Grande cancel any of her American tour dates. She hates America when its convenient for her. However, when she can make money, she loves America because we’re busy making her rich.

Grande is similar to female rapper Azealia Banks, who said that she hated middle America because they were white and racist and that she wanted to move to Europe.

Of course, Americans are the ones who made Banks famous, not Europeans. And just like Grande, she will not return any of the money she’s made in America either.

What these pop-star brats should do is take their money and music oversees and see how well they do in a market that crushes innovation and robs entrepreneurs of their hard-earned money with a sea of taxes.

These pop-stars are in-line with liberals like Michael Moore and Sean Penn. Moore, for instance, owns 9 homes in the country, though all he does is complain about capitalism.

Sean Penn, in similar fashion, lives lavishly in Hollywood and enjoys all the perks of being a celebrity in a capitalist country while whining about horrible America is and praising the leftist Venezuelan government and its leaders.

But, if Moore and Penn hate America so much, Moore should move to Canada and Penn should move to Venezuela. Americans would love to see how they survive in those liberal hell-holes.

That’s the thing about Hollywood, they are all talk and no action. But, if you’re not going to act, you might as well shut up.