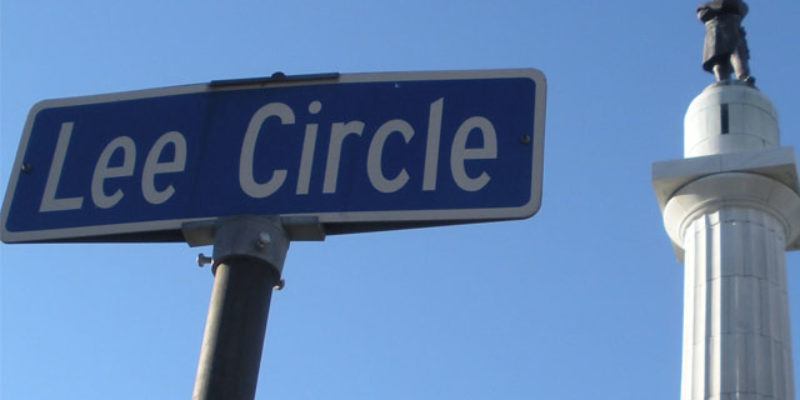 Jeff Sadow’s piece here at the site discussing how the lawsuit against his religious freedom executive order and his investigation into Planned Parenthood could make him more prominent among social conservatives and perhaps get his campaign off the ground missed something which is an even bigger opportunity for him.

Namely, that business down in New Orleans with the confederate monuments.

I’ll remind our readers of something that came out of the last independent poll released on the governor’s race; specifically the one Triumph Campaigns put out. After asking about gubernatorial preferences the pollster asked the question about what ought to happen to Lee Circle in New Orleans, and the respondents, who were people all over the state, said this… 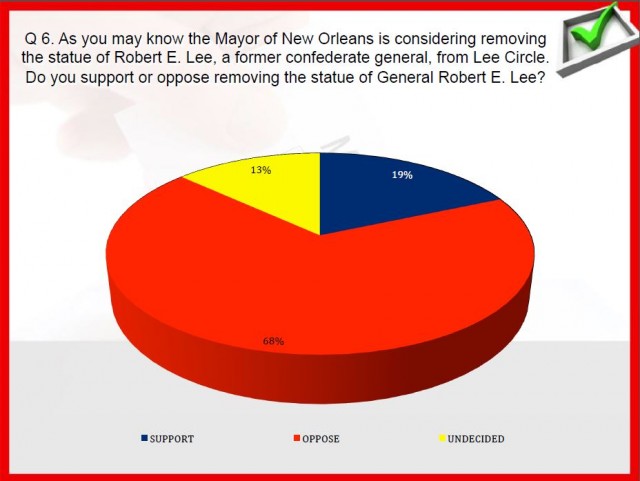 Any issue where the public gives a 68-19 margin in favor of a position is political gold for somebody like Jindal.

We all know that one reason the governor isn’t getting anywhere in the presidential race is that his poor approval rating in Louisiana has a way of disqualifying him for higher office. It’s a drag on his prospects, and before he can get anybody to listen to him he needs to alleviate the problem – at least to the extent that he can shrug it off by saying he did a lot of things to upset the applecart and happily paid the price for doing so in meaningless poll ratings.

You can make that statement when your approval rating is 45 percent. When it’s at 31 percent it doesn’t quite work.

I’m not saying that Jindal has a magic bullet to add 14 points to his approval rating in Louisiana. But I am saying that politically, and also where his legacy is concerned, he has an opportunity to burnish his standing back home given the graph above.

How? Step in and stop Mitch Landrieu and the insane clown posse that is the New Orleans City Council from tearing down Lee Circle and the rest of those statues.

I haven’t gone in and researched the state historical preservation statues to see if there is a specific legal authority for Jindal to intervene in the confederate monument issue in New Orleans, and as a proponent of political power being best used at the local level as a philosophical matter I’d prefer not to have a governor inserting himself into an issue like Lee Circle. But on the other hand, those monuments aren’t just part of the historical patrimony of New Orleans, they’re a prominent part of the historical patrimony of the entire state.

And that’s not a defense of slavery. It’s a defense of Louisiana’s history – good and bad. We should preserve as much of it as possible, and add to it if necessary. There is apparently some “slave ship” museum going up in New Orleans that would offset to an extent those confederate monuments, and if the city wants to put up a monument honoring, for example, the First Louisiana Native Guard, the regiment of black Union troops based out of New Orleans which saw battle at the seige of Port Hudson, then they absolutely should. Capt. Andre Cailloux, one of the company commanders in the regiment who died heroically at Port Hudson (interestingly enough, Cailloux also served in the Confederate Army before the Union took New Orleans), would make a good subject for a statue honoring the First Louisiana, and so would another company commander – P.B.S. Pinchback, who later served as the first Republican governor of Louisiana and the only black governor we’ve had thus far.

If Landrieu was an actual leader worth his salt, he would have gone the route of demanding more history in New Orleans, rather than less, and looked for someone to sculpt a statue of Cailloux or Pinchback to honor a piece of Louisiana history heretofore largely unknown.

So Jindal stepping in to try to stop Landrieu from tearing down any monuments wouldn’t make him some neo-Confederate racist; it would be more like he’s trying to preserve as much of Louisiana’s cultural heritage from the ravages of people who don’t know what they’re doing.

And while he might not actually have the legal authority to shut down whatever it is Landrieu is doing, he could certainly concoct a way to tie the matter up in the courts until next year, when the state legislature convenes for either a special session to work on the budget or the regular session in the spring – and at some point next year you can be sure there will be a legislator filing a Heritage Protection Act like the one Tennessee passed in 2013 which would end the threat of Landrieu and his minions taking pickaxes and bulldozers to those monuments.

If nothing else, Jindal stepping in would give him the opportunity to stand against the politically correct/cultural Marxist mob and catch arrows from them for a while – building street cred among Republican voters and perhaps picking up a bit of support inside the state that might allow him to go out with at least a competitive approval rating.

And when asked about why he’s doing this, here’s a quote for him to use, free of charge: “I’ve spent the last eight years looking out of my office window at the Capitol and seeing a statue of Huey Long, who for me symbolizes corruption and lawlessness on a frightening scale, forced redistribution of wealth and abuse of political power. I’ve been deeply offended by Huey Long’s record all my life – and yet in those eight years you’ve never seen me take any action to get rid of that statue, because it’s a piece of Louisiana’s cultural heritage and I have respect for that. Here, we preserve both the good and bad so as to better understand ourselves.

“If I can show that respect, so can the mayor of New Orleans, who not so long ago as a state legislator voted to allow Louisianans to get license plates with the confederate flag on them. It’s not a large thing, but it’s important.”

Interested in more news from Louisiana? We've got you covered! See More Louisiana News
Previous Article SADOW: Jindal Might Just Have A Breakout Opportunity Now
Next Article VIDEO: What Do You Think About The GOP’s New Ad On The Iran Deal?