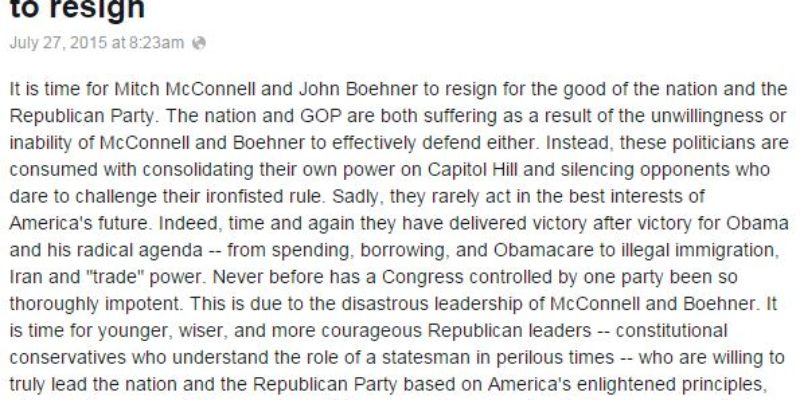 It might be too early to say that the stuff is hitting the fan over the weekend’s bizarre occurrences in the Senate Kevin Boyd talked about earlier today, but there is surely a lot of noise out there.

Lots of pundits on the Right trashing Mitch McConnell today, and then, via Facebook, here’s Mark Levin… 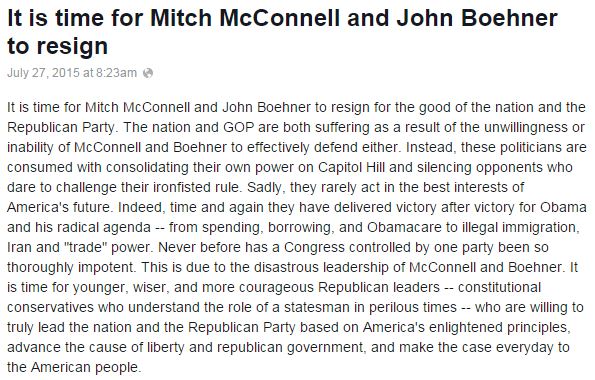 The guess here is you’re going to see more and more of this.

The GOP’s assumption of a Senate majority in the midterm elections last November was no endorsement of Mitch McConnell. It was a firing of Harry Reid and a host of tired, old Democrat incumbents who no longer reflected the wishes of their constituents.

McConnell has wasted what mandate he was given – namely, that the voters wanted the GOP majority to serve as a check on the president if not more. Instead, he’s run the Senate for six months and accomplished nothing.

As for Boehner, it’s been obvious for quite some time that he doesn’t have much support in the House. Challenges to his Speakership are constantly rumored, and he has to rule as a tyrant in order to hold his position.

The question is whether anybody within the Senate outside of Ted Cruz will care enough to challenge McConnell, or anybody in the House willing to mount an actual substantive challenge to Boehner. Because until there is, as badly as we need a change there is no mechanism to fulfill Levin’s demand.

Interested in more national news? We've got you covered! See More National News
Previous Article Steve Scalise Calls For Lifting The Ban On Crude Exports, And Why You Shouldn’t Care
Next Article Didn’t You Hear? Housing Projects Are The Answer To Everything In New Orleans