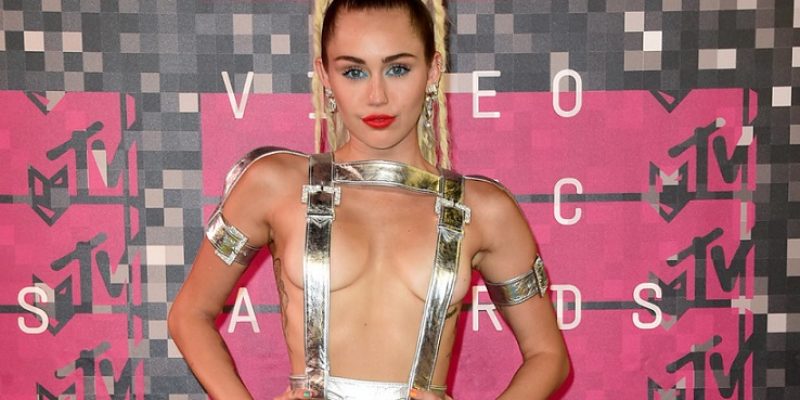 The decline of culture has a face and her name is Miley Cyrus.

Decades ago, when MTV actually played music videos and promoted the best musicians in the scene, the Video Music Awards (VMAs) represented a kind of shock that would have your parents in a rage.

Whether it be on-air fights between rappers or insane performances by bands like KISS, the VMAs were designed to award the best music videos of the year, while injecting a touch of shock, because youth culture is all about shocking your parents.

Nowadays, though, the VMAs, as demonstrated last night, is a gathering of out-of-touch Hollywood nut-jobs who are not shocking at all, they’re just planned marketing schemes that grasp tightly at victimhood culture.

Most notably, Miley Cyrus is the queen of stupidity.

If you were watching the VMAs last night, you may have actually found yourself getting dumber by the second watching this former Disney star parade around the crowd like a drug-addict on the most potent form of crystal methamphetamine.

First off, Miley decided that she would wear, essentially, no clothes for the night. Outfit after outfit, the tiny-framed pop-singer (by the way, you don’t stay that thin from a diet, she’s clearly on something) appeared before mostly the crowd of young people in outfits that showed just about everything.

It’s not all that shocking, though. We saw nipple-slips on live television before (remember Janet Jackson) and regularly see women in ad campaigns dressed in revealing clothes.

However, Miley thinks we’re all too stupid to realize that we know exactly what she’s doing. She’s trying to get a rise out of everyone, but it fails, because the majority of Hollywood starlets dress like porn-stars nowadays.

Then there’s the out-of-touch lifestyle that Miley continues to perpetuate to young people.

The entire night, we were told at least 30 times how Miley loves her some marijuana. She smokes weed, she puts it in brownies, she takes a hit of the pipe at night before she goes to sleep and she can’t survive without it.

What a great message to young people. Of course, she and all the other Hollywood elites who have no idea what young people experience or what they truly care about, will tell you that weed is no big deal.

Yeah, it’s no big deal when you’re a millionaire at the age of 22 and you can just sit in your Hollywood hills mansion all day and be a pothead and daddy will just put your name on any product and you’ll make millions from it.

That’s the life Miley, and so many others in Hollywood, live. They do not actually have to get up and go to work and attempt to pay for college, pay back their student loans or try to make enough money for rent this month.

They have no idea how young people live.

The truth for young people, however, is that once you become a pothead, you become the most unproductive version of yourself that you could be.

In college, it was obvious who was a pothead and who wasn’t (besides the fact that you could smell the potheads from a mile away). Once college students are hooked on pot, they usually start failing in every class and stop caring about everything.

So it’s easy for Miley and others (Kanye West) to tell us how fabulous smoking weed all day is. Because they’ll just have their pathetic parents and third-world maids do their dirty work for them.

Aside from this, there’s the hypocrisy of Miley and the rest of MTV.

During the two and a half hour award show, there were commercials every five minutes about ending smoking and self-acceptance.

Anti-smoking commercials right after Miley tells us how fun it is to eat hash-brownies all day. That’s rich. It’s also rich that Miley stands practically nude on stage with her 105 lbs frame and then it cuts to a commercial about ‘self-acceptance.’

Because young people should really be taking advice from a television station that glorifies teen pregnancies and turns their lives into reality shows that the executives at MTV make millions off of.

Then there is the victim culture Miley perpetuates to her too-dumb-to-realize-how-stupid-they-are fans.

Throughout the VMAs last night, viewers were force fed “social messaging” that glamorized the #BlackLivesMatter movement as basically the new Civil Rights cause.

And even though we have gay marriage now, Hollywood had to use the gays to make another case for victimhood, because gays are still victims ya’ll.

On top of that, transgendered people are the new, 21st century victims.

You cannot get more ‘victim’ than a transgendered person these days. Unless of course your a half black, half Hispanic transgendered woman who identities as a pansexual and prefers to have intimate relationships with objects instead of humans. Then you are really a victim.

Little do those transgendered people know, they’re being used for shock value so that Miley gets headlines in the press and the writers at Salon.com declare her the new Mother Teresa because she has trans friends.

Yeah, Miley is so brave.

Also, Miley will say that she dressed like Jenna Jameson all night because she’s helping women become less ‘oppressed.’

If you haven’t heard, the new cause that feminists have taken on is the horrible oppression of having to wear a shirt. Oh my goodness, the horror! Miley’s a proud advocate for the “Free the Nipple” campaign, that preaches about how much women are oppressed because they have to wear shirts.

This is the kind of out-of-touch-ness Hollywood morons like Miley engulf themselves in. As if women around the country think twice about having to wear a shirt. What they actually care about is getting a job out of college, figuring out how they are going to put food in their kids’ mouths and trying to keep their household sane.

Yet, here we have Miley telling us the biggest issue for women is that they have to wear shirts.

In the most ironic part of the entire VMAs, Big Sean (he’s a rapper, I think) says that he was accepting his VMA award and dedicating it to his grandmother who was a black female general in the Army during World War II.

Then, suddenly the camera cut to Miley with her boobs (which can barely be considered boobs they’re so tiny) on display for the world to see.

Not only is it ironic, but it’s sad because in just 10 seconds, it epitomizes the decline of culture.

While Hollywood certainly does not represent American culture in its entirety, it plays a part, and conservatives should stop ignoring this just because they do not want to talk about Miley Cyrus’ breasts.

No, we should talk about Miley. And we should let the rest of the country know how much damage feminist women and Hollywood elites like Miley do to young people’s thought process’ and mindsets.

The best part of the cult of celebrity and fame is that these people can steer what the public talks about.

Today, our Hollywood elites do just the opposite.

Miley and others talk about issues that affect no one (freeing the nipple), only for the sake of being an oppressed victim (because it’s so cool to be a victim), and to promote themselves.

We do not hear about the thousands of wounded warriors who suffer from PTSD after they get back from war from Hollywood elites.

And we certainly do not hear about where those young people who try to be like Miley by doing anything possible to get famous end up. That’s because they usually end up homeless and jobless.

No, all we hear about is how Miley Cyrus is cool because she smokes pot and hangs out with transgendered people.

That is the decline of culture. Thanks Miley.