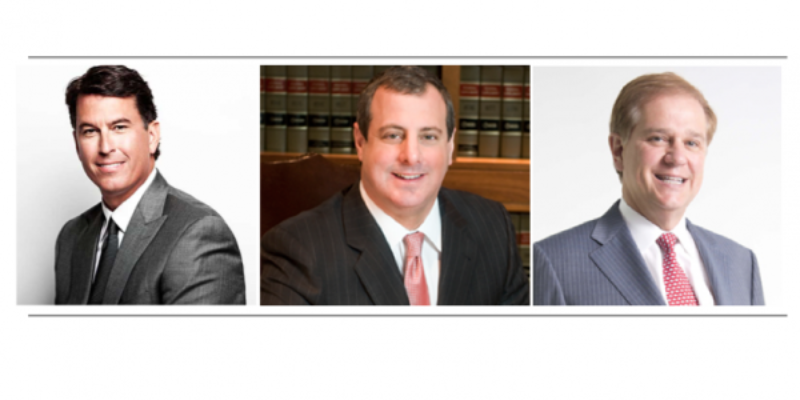 It is no surprise that super PACs are playing a huge role in the 2015 Louisiana election cycle. With the wide-open race to replace Gov. Bobby Jindal finally heating up, donors on both sides of the aisle are pouring millions of dollars into political action committees that can raise unlimited amounts of money.

But what may be shocking to some are the lengths to which a few super-rich personal injury trial lawyers are going in an attempt to mask the depth and size of their influence on elections in Louisiana. Gumbo PAC is the most recent example of this.

Look at the faces featured above and below.  Do these guys really represent people of “varied backgrounds, industries and political philosophies”?

That’s what Gumbo PAC claims on its website, but the truth is this committee is overwhelmingly supported by a small group of powerful and very wealthy trial attorneys who oppose lawsuit reform in Louisiana.

According to campaign finance reports filed with the Louisiana Ethics Administration earlier this month, Gumbo PAC raised $196,000 during the three-month period from April to July 2015. 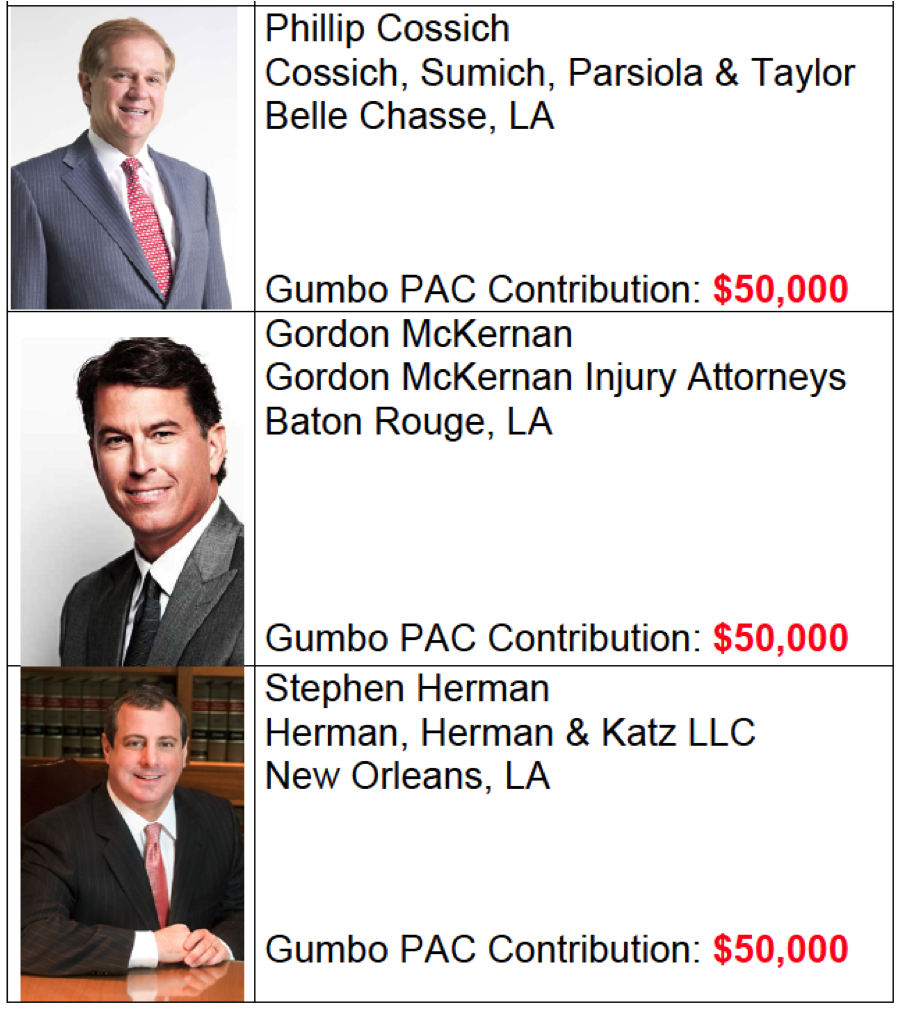 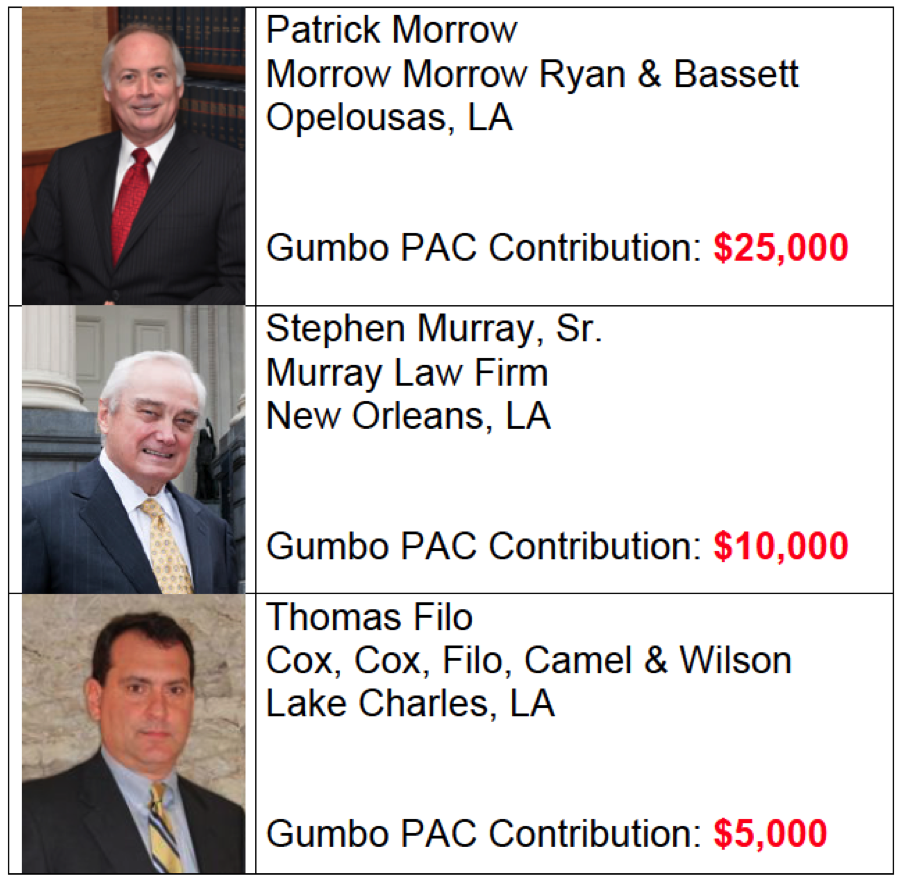 In addition to the money these trial lawyers poured into the PAC, some also gave in-kind contributions to pay for billboards and DC-based political consultants.

Bottom line: This is not a grassroots movement.  This is not broad-based or wide spread.  This is a handful of wealthy, well-connected personal injury trial lawyers trying to influence an election and ultimately kill public debate about the need for lawsuit reform in Louisiana.

Their claim of being non-partisan also rings hollow. Gumbo PAC is only targeting Republican gubernatorial candidate and current U.S. Senator David Vitter, and it is run by Trey Ourso, a former head of the state Democratic Party, who is now a Democratic political consultant with the Baton Rouge-based firm Ourso Beychock.

So why go through the charade of setting up a new group that claims to be a “non-partisan clearinghouse of information focused on educating Louisiana voters”?  Trial lawyers have a well-deserved reputation for quietly manipulating the legal system so that it primarily serves their interests, rather than the interests of ordinary people. That appears to be their motive for bankrolling Gumbo PAC- so they can “educate” voters under false, or at the very best misleading, pretenses.

In fact, they are following a script written by millionaire personal injury lawyers in Texas.  In 2012, Houston-based attorney Steve Mostyn, who made his fortunes off hurricane lawsuits, set up six similar innocuous sounding PACs (Texans for Insurance Reform, Back to Basics PAC, etc.) that were used to funnel more than $10 million in an attempt to influence elections in the Lone Star State.

That same year, LLAW also noted the influence that trial lawyers had on the outcome of the Louisiana Supreme Court race.  In that contest, a small group of personal injury attorneys established the Clean Land and Water PAC and used that organization to spend close to $1 million in support of Jeff Hughes, who ultimately won the coveted seat on the state’s high court. Once again the group claimed to be a diverse coalition of “Louisiana citizens,” but the effort was primarily funded by huge donations of $100,000 or more from personal injury lawyers who make their money off of lawsuits and oppose any effort to bring more fairness and balance to Louisiana courts. In fact one law firm that contributed $270,000 to the PAC now has a precedent setting case pending before the Supreme Court.  You can bet they are hoping their investment in Hughes’ election will pay off.

Like it or not, the scheme works and it is perfectly legal, so we can expect to see more of it.

Of course, the outcome of the governor’s race remains to be seen, and the impact that Gumbo PAC will ultimately have on the election is anything but clear, but voters have a right to know who is bankrolling this group and question why they are doing it.

Interested in more national news? We've got you covered! See More National News
Previous Article Why You Should Boycott Your Local Target Store For The Sake Of Your Children
Next Article AFTERBURNER: The Great Unlearning, Or How Our Society Became So Stupid