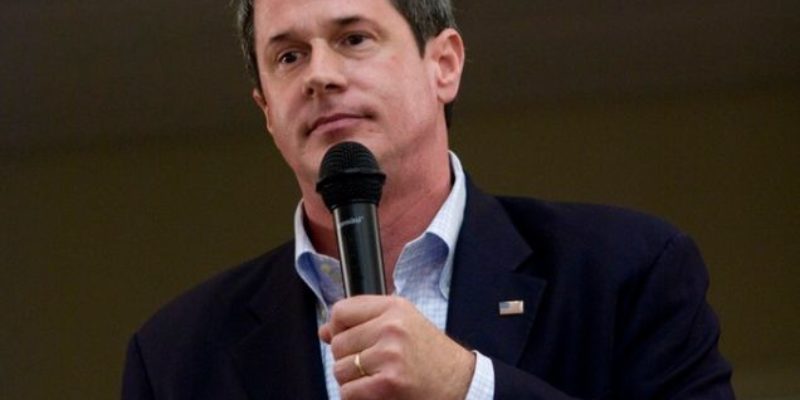 This month’s poll contains responses from 1,050 respondents surveyed on Tuesday and Wednesday of this week.

The sample is 55 percent female. By party registration, it’s 48 percent Democrat, 38 percent Republican and 14 percent independent. On fiscal and economic issues, 57.6 percent call themselves conservatives and 33.4 percent moderate, with just nine percent calling themselves economic liberals. And on social issues, the breakdown is 56.5 percent conservative, 26.5 percent moderate and 16.9 percent liberal. Some 71 percent of the respondents are white and 26 percent black.

And David Vitter and John Bel Edwards are going to be in the runoff, according to the poll. Vitter sits at 31.1 percent, with Edwards at 30.6 percent. Scott Angelle (14.1 percent) and Jay Jardenne (13.4 percent), both of whom have made slight gains since the last poll at the end of June, are still far off the pace. 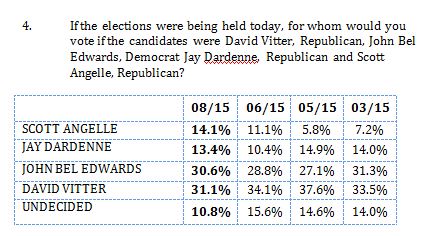 Vitter has shed three points while everyone else has gained a little, but the problem for Angelle and Dardenne is that neither has been able to substantially gain on the other – and thus they are currently cancelling out each other’s chance to push into the runoff.

That hasn’t changed much since the field as currently constituted was set.

But the undercurrents have changed a bit, largely as the heat of the legislative session has cooled. A couple of results… 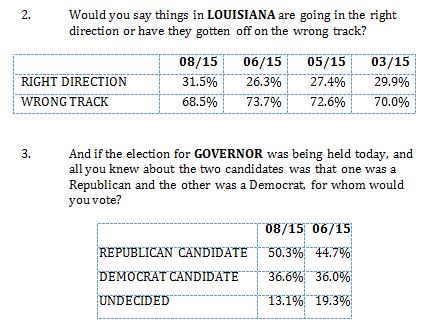 As you can see, there has been about a 5-6 point move back toward the Republican perspective in the past five weeks, with that movement coming at the expense of what could be termed the “throw them all out” point of view. Members of the legislature might look at the slightly-improving right track/wrong track numbers and conclude their votes for tax hikes weren’t the political poison pill initially expected. We would caution that to be a mistake.

We also polled the Attorney General’s race to see what a head-to-head contest between Jeff Landry and Buddy Caldwell would look like. Yes, there is a Republican named Marty Maley in the race (he’s a prosecutor in West Baton Rouge Parish) and a Democrat named Ike Jackson (an oil and gas lawyer from Plaquemine), but as of now there is little reason to see the race as other than a Landry-Caldwell runoff. Here’s how that looks at present…

Landry’s camp ought to be happy with an incumbent sitting at only 30.7 percent in a runoff – you’d think he could pull better than half the undecideds and win. But 60 percent of black voters and 59 percent of the people calling themselves strong Democrats are undecided.

One more result our readers might find interesting – while we’ve been talking about Charles Boustany and John Fleming as potential Senate candidates in the event Vitter wins the election this fall, those aren’t the main players among the general public at this point… 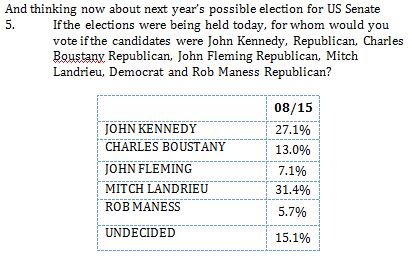 For the most part, there has been little change in the race for Governor. As was the case in our previous 3 surveys, Republican David Vitter and Democrat John Bel Edwards are the clear front runners, both locked in a statistical tie (31.2% Vitter/30.6% Edwards).  Both front runners continue to solidify their base, which is making it more and more difficult for the other candidates to show growth.  Additionally, it’s making it nearly impossible for a late arrival to make any headway.

Based on Louisiana election history, if Edwards solidifies the African-American vote, on election night he gets between 36 to 40%.  Therefore, this race is about who runs second and that will be determined by which of the remaining GOP candidates performs best among white voters.

As it stands now, that candidate is David Vitter.  He leads among whites by double digits in 4 of the 7 media markets, which represent 59% of the state’s white electorate (Shreveport-Vitter +33/New Orleans-Vitter +32/Alexandria-Vitter +27/Monroe-Vitter+17).

Dardenne and Angelle have a slight advantage among whites in their respective geographic base.  Among white voters in the Baton Rouge media market, Dardenne leads Vitter, by 6 points (Dardenne 32.9%/Vitter 26.7%).  In the Lafayette media market, Angelle leads Vitter among whites, by 4 points (Angelle 38.6%/Vitter 34.2%).  Lake Charles appears to be a swing media market (Vitter 30.8%/ Angelle 25.2%/Dardenne 10.2%/undecided 17.6%).

Our most recent survey also tested the head-to-head between Jeff Landry and Buddy Caldwell for Attorney General.  In a head-to-head, this race is both dead even and wide open.  Both candidates are statistically tied (Landry 29.9%/Caldwell 30.7%); however, 39.3% of the electorate is undecided.  Should this head-to-head come to fruition, traditional Democrat voters will have a big say in which candidate ultimately wins.  Overall, 39.3% of the electorate is undecided.  However, 60% of African American and 59% of strong Democrats are undecided.

The first public poll in a hypothetical 2016 US Senate election has New Orleans Mayor Mitch Landrieu and State Treasurer John Kennedy leading with Congressman Charles Boustany running a respectable third.   Kennedy is running strong in Congressional District 1 (Jefferson/St. Tammany) and Congressional District 6 (Baton Rouge), while Mitch Landrieu has galvanized the traditional Democrat base.  Both Congressman, Boustany and Fleming have a regional base from which to grow.