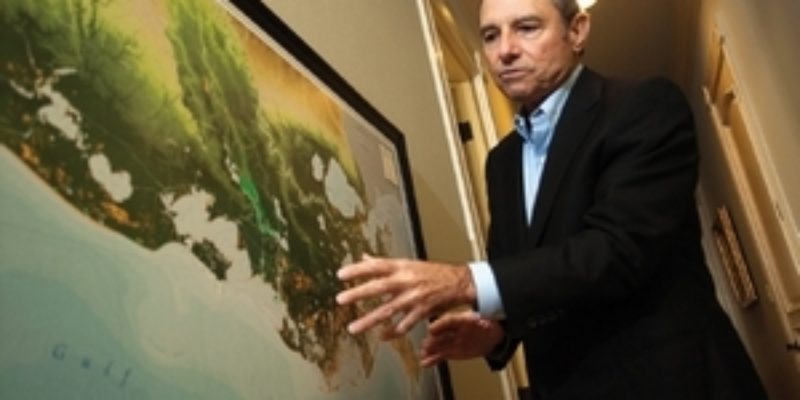 Millionaire trial lawyer John Carmouche, who has made a fortune from controversial legacy lawsuits, is single-handedly bankrolling the deceptively named super PAC that is running attack ads against U.S. Sen. and Republican gubernatorial candidate David Vitter.

According to campaign finance reports filed with the Louisiana Ethics Administration, Carmouche’s law firm Talbot, Carmouche & Marcello made a $600,000 contribution and an additional $500,000 loan to the effort for a total $1.1 million investment in the Louisiana Water Coalition. As of the September 24 filing deadline, the super PAC had spent $795,000 of that on TV and radio ads across the state. Vitter, who has been an outspoken proponent of legal reform, is the sole target of the advertising campaign.

In spite of the innocuous-sounding name and the group’s initial claims of bipartisanship, Carmouche’s PAC has nothing to do with water, and it is definitely not bipartisan.

In fact, the Louisiana Lawsuit Coalition would be a more accurate description for this effort.

Most settlements from these lawsuits are kept secret, but some experts estimate legacy cases settle for an average of about $20 million each, with trial lawyers, such as Carmouche, raking in legal fees between 30-40 percent of the awards. That’s a pretty big financial incentive to maintain the status quo, which is the exact opposite of what Vitter has said he would to do as governor.

In a recent interview with the Baton Rouge Business Report, Vitter reiterated his concerns about the impact of legacy litigation on jobs and investments in Louisiana:

“Our state needs significant tort reform. And I am clearly the only candidate for governor who has said that litigation reform will be a real priority…

“One area I’ll focus on in particular is legacy lawsuits. These lawsuits are strongly and negatively correlated with Louisiana drilling activity. Over the past eight years the economic impacts of the cumulative legacy-induced litigation alone can be said to have led to the reduction of close to $10.5 billion in Louisiana economic output and over 30,000 lost employment opportunities.

“I’ll fight for key reforms like guaranteeing the full right to trial by jury, stopping judge-shopping and preventing lawyers from raising unlimited campaign funds for judges they practice before. I’ll also oppose unfair lawsuits against energy producers for activity in the often distant past where they followed all applicable rules and regulations.”

Vitter was also heavily involved in the legacy lawsuit reform legislation that passed through the Louisiana Legislature in 2012. That bill attempted to undermine Carmouche’s lucrative law practice by ensuring that any money awarded for environmental damage in a legacy lawsuit actually goes to cleaning up the property, rather than in the back pockets of trial lawyers and the landowners they represent.

Apparently, Carmouche has not forgotten the key role Vitter played in those reform efforts. And there’s no doubt he understands the millions in profits he and his firm are making off of legacy lawsuits are threatened by Vitter’s pledge to do even more to rein in abusive litigation if he takes over the 4th floor of the State Capitol.

Is it any wonder then that Carmouche would drop a cool million to take on the candidate who is going after his bread and butter? Of course not. In fact, this is not the first time he has resorted to expensive, hard-hitting campaign tactics to influence the outcome of a high-stakes election.

In 2012, Carmouche ran a similar effort called the Citizens for Clean Water and Land (CCWL) PAC. According to state records, Carmouche used that PAC to pump more than $300,000 into Justice Jeff Hughes’ successful campaign for a seat on the Louisiana Supreme Court. That is in addition to the $264,000 Carmouche and his firm personally contributed to other politicians across the state since 2009 when legacy lawsuit reform surfaced as a major issue at the Capitol.

This multi-year, multi-million dollar effort to steer elections is a clear indicator of just how far Carmouche will go to protect his profits and advance his narrow agenda to expand the boundaries of civil liability in Louisiana.

How will voters respond to Carmouche’s $1.1 million election scheme? We’ll have to wait until the October 24th primary to find out.

Interested in more national news? We've got you covered! See More National News
Previous Article Want To Make Louisiana’s Roads Better? Vote For These Two Amendments In October
Next Article Did a 13 Year-Old Conservative Lie About Being Blocked by Obama?