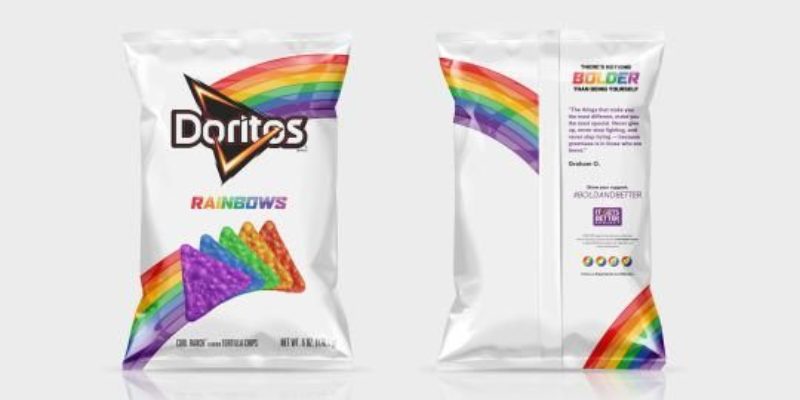 When will cheerleading for the gay community like it is a disabled group of children end?

After gay marriage won in the United States Supreme Court, some conservative and libertarians were relieved because it meant an end to hearing the Left tell the public how oppressed gay individuals are.

Yet, corporations like Doritos want to make it known that they are all about the gayness, the glittery-ness and the fabulousity of the gay and lesbian community.

Doritos will be launching quite soon their rainbow Doritos which will feature a rainbow on the front of the bag design and rainbow colored chips because, you know, gays are still oppressed individuals that need to be cradled and lifted out of the shadows.

Why does the Left have to constantly act like gays are moronic victims that need to be defended and protected from a non-existent anti-gay dictatorship?

But if you were just reading the news and now apparently eating Doritos, you would think there was a rapid majority that is out to get the gays and lesbians and the Caitlyn Jenner’s of the world.

This is actually pretty typical tactics for the Left.

Identity politics are what keep single women and college students (besides the fact that college students are usually stupid) voting for Democrats because young people are told in school that if you’re woman, gay, lesbian or any kind of minority, you need to be liberal or else you’re heartless.

Rainbow colored Oreo’s made sense pre-gay marriage being legal. But, afterwards, who the hell cares? Why do we all have to constantly be told how wonderful the gays are?

We know how awesome gay individuals are. They make up our friends and family members. And they make fabulous hair-dressers and fashion consultants.

Gay men make more money than any other identity group in the country. They’re also usually better looking and get more attention from women than straight guys. They’re not the victims that the media and corporations portray them to be.

Instead, why doesn’t Doritos make a limited edition of bright blue Doritos to support Autism, a fast-growing issue among children (especially with boys)? Or a limited edition Dorito for heart disease which is the number one leading cause of death among women?

No, let’s not help groups of people who actually need help and who are wildly underrepresented in just about every aspect of American culture.

Instead, let’s focus on a group of individuals who continue to be labeled as victims and oppressed even though no one can cite any cases of oppression.

Please. This rainbow Doritos garbage is a ploy to continue on the legacy of identity politics that the Left has ingrained in minority groups and young people.

Don’t buy into it gays.

Interested in more national news? We've got you covered! See More National News
Previous Article The Best of The Red Bayou Show, Volume 1
Next Article 4 Issues Pope Francis Must Address On His Trip Around America