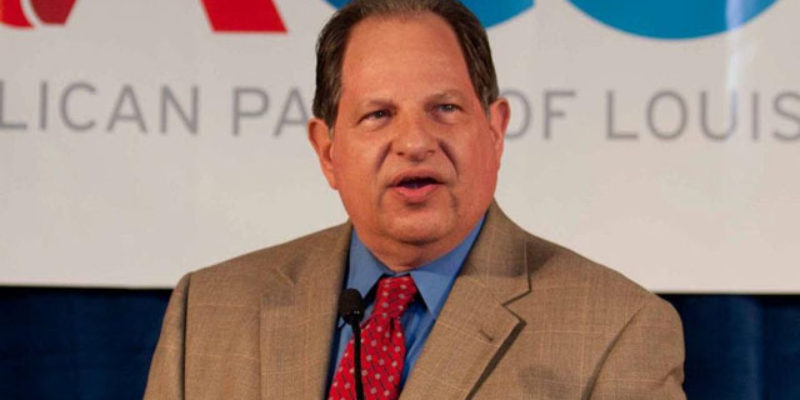 It’s not often that the chairman of the Louisiana Republican Party makes national news, but he has.

Mostly because of this… 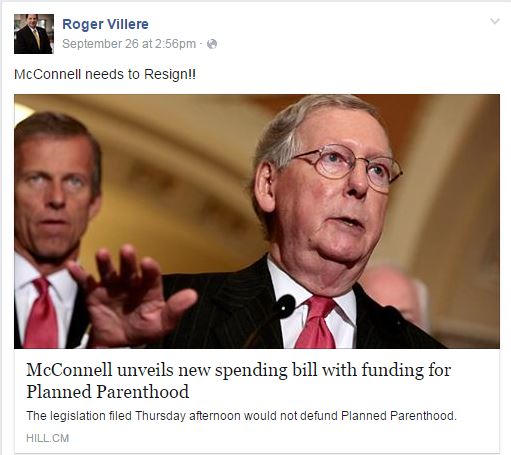 The Washington Times picked up on that Facebook post and quickly grabbed Villere for an interview – that was actually pretty good stuff. Villere’s perspective is that McConnell and the Senate majority have completely alienated the Republican base he’s worked very hard to build and he’s had enough.

Mr. Villere isn’t just any Republican. He’s the longest-serving state GOPchairman in the nation, with 12 years on the job, and is the vice chairman of the Republican National Committee, the GOP’s national governing body. He also serves on the RNC’s executive committee that makes decisions alongside Chairman Reince Priebus.

“Mitch is a good and honorable guy, but the base is leaving our party,”Mr. Villere said in an interview with The Washington Times. “I’m out in the field all the time and we have all our elections this year for state offices, and it’s hurting us tremendously with our elections.”

Mr. Villere did say what specifically about Mr. McConnell makes his state’s rank-and-file GOP voters so dyspeptic that they want him out as leader — his failure to challenge executive overreach by President Obama or fight to repeal Obamacare and other unpopular measures.

“Mr. McConnell could have suspended consideration of confirmations for all presidential appointees, except for those who are essential to national security, until the president rescinded his unconstitutional executive action on amnesty,” Mr. Villere said.

“This would have been a constitutionally appropriate response to the overreach of the executive branch,” he said. “It would have transformed the political environment, greatly encouraged Republican donors and grass-roots activists, and positioned us to refuse to confirm replacements for any Supreme Court openings that might occur during the remainder of the Obama administration.”

Mr. Villere ticked off other sources of discontent with Mr. McConnell.

“Not trying to repeal Obamacare, not defunding Planned Parenthood, not trying to stop illegal immigration,” he said. “That is what Republicans ran on and once they were elected they did not follow up with their promises.”

And a nice finish…

“If we lose the battle, we will never win the presidency again in my lifetime,” said Mr. Villere, who is 66. “I’ve worked for 12 years as chairman to build this party, and I just don’t want to see it all go down the drain because they aren’t willing to fight for what we believe in. Our base is demanding we do something or they’re going to leave us.”

“The GOP brand is being damaged. We’re having to work from scratch to do all the groundwork we’ve already done with elections of Republicans to Congress and in the state because everybody is so furious at the leadership,” Mr. Villere said.

The guess here is Villere is anything but alone among the heads of state Republican parties who are directly dealing with grassroots activists and small-to-medium-sized donors, and catching holy hell from those people about what’s perceived to be an abject failure of leadership in Washington.

John Boehner, who didn’t particularly shower himself in glory on Face The Nation yesterday in whining about all the “false prophets” in the GOP who think the party should actually stand for something (which is a direct shot at Ted Cruz), is no longer the face of the failure, which is a good thing since Boehner’s face usually had tears running down it.

Now it’s McConnell, who has actually been a considerably larger problem than Boehner.

But while there were suitable numbers of conservative House members to unseat Boehner (he wasn’t forced out, but the wolves were within earshot of his door), the same doesn’t hold true in the Senate. There is no particular Freedom Caucus in the Senate. There is Cruz, Mike Lee, Rand Paul, Jeff Sessions, David Vitter, Tom Cotton, occasionally Rand Paul, sometimes Tim Scott and once in a while a few others here and there, but to get more than a dozen Freedom Caucus-style Senate Republicans who are willing to disrupt the Washington machine in order to bend it to a conservative agenda you really have to stretch. The majority of the Senate GOP caucus is behind McConnell – the John McCains, Lindsey Grahams, Kelly Ayottes, Susan Collinses, Orrin Hatches and Lamar Alexanders of the world are right where he is.

That where they are is not where the Republican electorate, which is distinctly displeased with the lack of deliverables from going on nine months of GOP control of both houses of Congress, resides is not a problem which will cost McConnell his leadership position this year.

Next year, though, when a third of the Senate’s seats are up for re-election and the majority of those will be Republicans, that could absolutely change. Villere is sounding a pretty big alarm about the displeasure of the party’s voters with its Senate leadership, and if he’s not listened to it could well be that the voters won’t be listening to Republican candidates next fall.