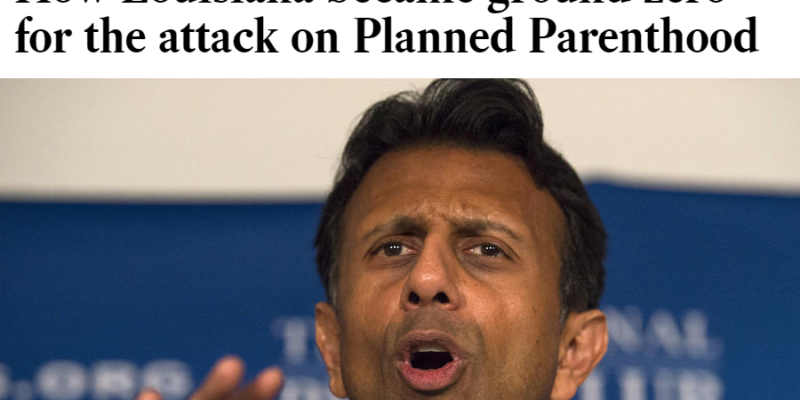 Now, though, the rest of the national mainstream press is jumping on board, complaining that Louisianians are simply too pro-life and they hate Planned Parenthood too much.

Except there’s just one problem. Planned Parenthood politicized the issue the minuted they demanded their $500 million in yearly federal funds.

No organization can just get away with reaping that much money from taxpayer dollars, use it for abortion services and selling human body parts and then not expect anyone to be up in arms about it.

Even worse, the Los Angeles Times claims that Louisiana needs more Planned Parenthood facilities because of syphilis and gonorrhea, both of which are sexually transmitted diseases.

It’s the classic leftist idea that women need Planned Parenthood or they will die. Or women and men who are sexually active can just go to their pharmacy and local Walgreens and get birth control and condoms. It’s not that difficult to do.

Planned Parenthood facilities are abortion clinics, which is precisely why legislators, the governor and more than half of the state agrees that they should be defunded and stricter regulations should be placed on them.

See, Louisiana does not need Planned Parenthood because the state has a fast-growing market of pregnancy help centers.

Not to mention, if you call a Planned Parenthood facility in the state of Louisiana, you will be alarmed to find out that no one on staff knows which facilities actually conduct these ‘cancer screenings’ and ‘mammogram tests’ that Planned Parenthood President Cecile Richards loves to tell us about.

Planned Parenthood is not healthcare. That’s something Louisianians understand because we are not so easily conned by the abortion industry like California is.