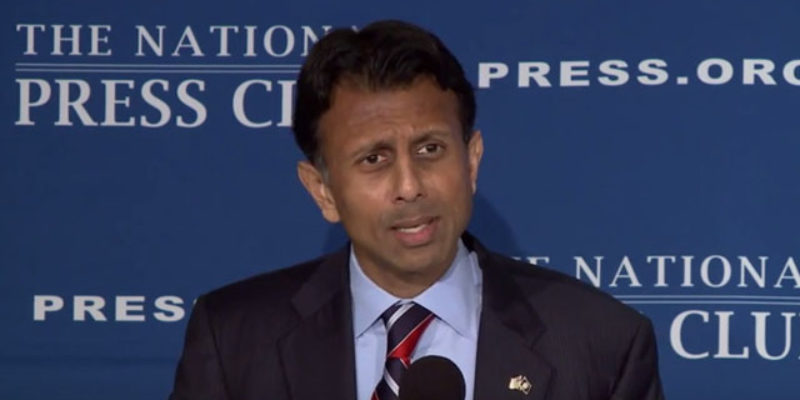 Everybody else in the GOP field who has attacked Donald Trump so far has gotten killed by the response, as Rick Perry, Lindsey Graham and Rand Paul can attest.

But at this point, Bobby Jindal doesn’t have much to lose. He’s at, what? Zero point three percent in the polls? Jindal might have a little bit of life in Iowa, but otherwise his prospects are unquestionably dismal and the question is most accurately phrased as how much longer he can even stay in the race.

So why not take a few whacks at Trump? Besides, it looks a good bit like The Donald is becoming a bit vulnerable. He stepped in it this week by commenting to a Rolling Stone reporter essentially that Carly Fiorina is too ugly to be president, which even for a Trump insult is a bit too crass and ungentlemanly for the consumption of the general public. There is a good third of the Republican Party’s most loyal voters who are at this point intractably opposed to supporting him, and the more he careens from one indefensible statement to the next the more it’s going to be impossible to get those people on board.

The Fiorina thing was only one problem that emerged yesterday. After all, Trump started off by saying America has a duty to take in a big number of Syrian migrants, and by the end of the day he was saying we have enough problems and those people will have to go elsewhere. You simply can’t run for president by contradicting yourself on the same day.

And everything Jindal says in this speech, which is a little disjointed and really more a collection of sound bites offered up for cable news to chop out and use, is correct.

Does this help Jindal? Probably not. It might help somebody else, though – this could be a suicide bomb of sorts.

To make this work, he’s going to need to be able to hang in there when the inevitable counterpunch comes, and if Trump was willing to essentially call Fiorina a dog Lord knows what he’ll do to Jindal.