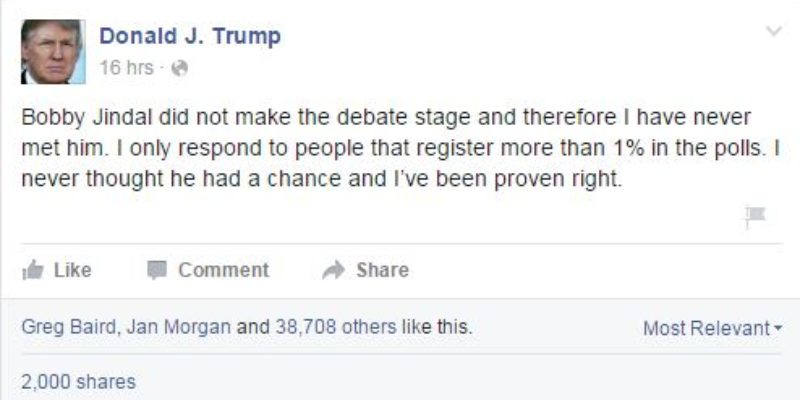 Steve Deace, radio host, Washington Times columnist and Iowa political power broker, is usually spot on in identifying and diagnosing the pressure points between politicians, particularly those of the Republican stripe, and the electorate. So when he took to Facebook yesterday to opine on the Bobby Jindal/National Press Club roast of Donald Trump which does not appear to have generated much in the way of positive results for Jindal, we found it to be quite interesting stuff.

Deace didn’t disappoint. Essentially what he said, which we’re flat-out stealing and offering below, is that Trump is succeeding because he fits the time and the character of the American people and to beat him another candidate is going to have to demonstrate that they also resonate. Jindal obviously, to this point, does not – which is why Trump’s social media dismissal of Jindal as not worthy of a response, seems to have made a far bigger splash than Jindal’s hour-long indictment.

In case you didn’t see what Trump said, it’s here… 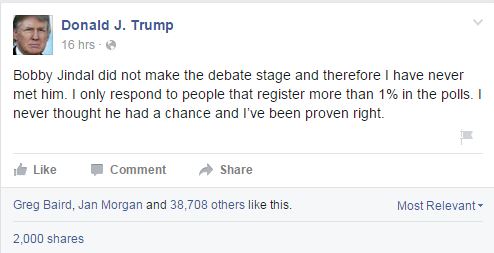 Note that in 16 hours he got 2,000 shares and almost 39,000 likes for a Facebook dismissal. By contrast, Jindal’s Facebook has a half-dozen posts about how Trump is a narcissist and clips of his speech yesterday, and the busiest one of the bunch had about 1,800 likes and 400 shares. And it’s Jindal trying to hype the conflict, not Trump.

As we said yesterday, Jindal’s speech was more or less a collection of sound bites to be clipped out for later use, so perhaps initial reactions aren’t quite dispositive of who won the exchange as history will see it. But so far, it’s reasonable to say that Jindal didn’t really score on Trump despite offering up a brutal attack on him that contained a lot of truth.

I feel compelled to post this today now that a man I really respect and like, Bobby Jindal, has decided to become the next to try and take on Donald Trump.

If you’re going to take on Donald Trump, you have to understand first and foremost why he’s been successful. These are the eight reasons:

3) The truth is if you spend only five minutes on social media where most Americans live and interact these days, you will see the crudity with which Trump communicates at times is common place. Name calling abounds. If someone disagrees with you they are an “idiot, moron, loser.” Personal appearance putdowns are abundant. And so on and so on. So while people with a Biblical worldview, or those with more polite notions, may be offended by his bombastic ways, the reality is those who reside in those respective camps are a distinct minority of Americans. Trump’s persona actually matches up much more with the American mindset at the moment. Let’s face it, you’re living in an era when most Americans spent more time watching reality television than studying their Bibles.

4) Many Americans believe America is exceptional, but don’t know why. They want America to win for winning’s sake. Again, you’re dealing with a culture that has seen its historicity and legacy hijacked/abandoned in the last generation. So there is sentiment there, but little foundation.

5) Trump’s moral failings and ability to successfully rise above them in a worldly sense resonates with a people that have been plagued by a systemic moral breakdown. Especially the way all of his children have become success stories and stay out of the tabloids despite his divorces (which most Americans have suffered through, too). Essentially Trump has a civil testimony they aspire to.

7) People are tired of working for others in general, but illegal aliens in particular. For example, they’re tired of governors who sign Dream Acts for illegals to get free or cheaper college tuition when they can’t afford it for their own kids.

8) Conservatives, particularly evangelicals, have yet to coalesce behind a candidate. At this point their support is split.

Up until this point all those who attempted to take Trump down have only gone down themselves instead is because they failed to acknowledge these eight things. All those moving forward who fail to understand these eight things about the Trump phenomenon will also fail, because they will be seen as attacking a sizable chunk of the primary electorate and not Trump.

The voters want to see the candidates top Trump, not topple him.

I am not saying whether that’s good or bad. I’m saying it is what it is. I’m the meteorologist here giving you the forecast. I am not responsible for the weather itself. That is a force of nature I am not empowered to alter.

And these are the reasons you haven’t seen Ted Cruz attack Trump, and you won’t until if/when it’s down to the two of them for the nomination. Because Cruz understands these realities, and the reality our base of true Biblical-worldview people is depleted after a generation of American church abrogation/meltdowns. For goodness sake, WORLD Magazine’s survey of evangelical leaders ranks Rubio #1, and he was one of the first to surrender on the marriage issue. And these are supposed to be our leaders?

Eventually Trump’s voters can become voters of true Biblical conviction if we welcome them instead of driving them away, because they’ve already demonstrated they have the right instincts to take on the system. Which, frankly, the vast majority of Christian/conservative leaders/organizations who are now criticizing Trump for his peccadilloes failed to do for a generation. Thus playing a role in landing us in the very deep ditch we currently reside.

That doesn’t mean Trump shouldn’t be vetted, or excused for boorish behavior. But it does mean that it will take discernment to take on Trump, because you’re not really taking on Trump. You’re taking on the spirit of the age he represents.

Deace’s explanation goes a long way toward illuminating why Trump supporters don’t seem to care about their candidate’s many inconsistencies – and particularly those which are pointed out by the professional politicians he’s running against. Nothing a Bobby Jindal, who might be seen as a bright young bulb in the party but can’t achieve liftoff as a presidential candidate because if nobody is impressed with Scott Walker’s record as a governor then what hope can Jindal have, is going to say will change any Trump supporters’ minds.

For those of us who like the idea of trashing the establishment – just look at the stupidity of the GOP in Congress as they wallow in failure to stop the Iran deal and you’ll understand why Republican voters have had it with the party’s elite – but want it trashed by someone with a little more policy knowledge and bona fides than Trump, this is a torturous election cycle to watch. Trump’s campaign has survived more race-killing asteroids than any in American history, which would make him attractive if it appeared he was getting better as a candidate. But reversing himself within 10 hours on Syrian refugees, calling Carly Fiorina too ugly to be president and then trashing Ben Carson as a fake Christian all in the space of 48 hours is a pretty good indication he’s not getting better. Jindal was correct on that scale, but nobody cares what he – or any of the other candidates who feel the need to attack Trump – think.

Because as Deace says, attacking Trump is attacking the spirit of the times. Cultural decline has consequences, and our culture has been in decline for two generations. It gave us Obama; what chance is there that it will give us a knight in shining armor for his successor?