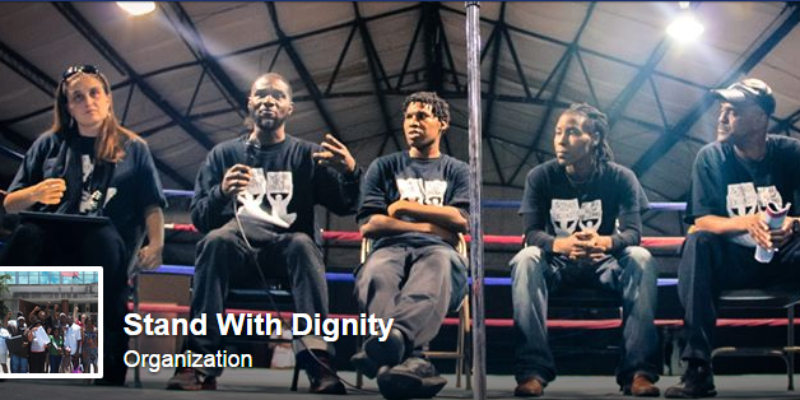 An activist group seeking the removal of four Confederate-related monuments in New Orleans apparently has ties to the #BlackLivesMatter movement.

The group “STAND With Dignity” is a partner group under the “New Orleans Workers’ Center for Racial Justice” group, which often holds rallies comprised for immigrant and illegal immigrants demanding the state to cease deportations.

STAND With Dignity often uses Twitter to promote the hashtags #BlackWorkersMatter and #BlackLivesMatter. And they usually get what the want.

Most recently, the group was successful in lobbying the New Orleans City Council to increase the city’s minimum wage to $10.55 per hour, a plan bound to hurt businesses across the city, as it has happened in Seattle, Washington.

Even more recently, the STAND With Dignity group, along with the New Orleans Workers’ Center for Racial Justice group, seemed to have a great influence over an ordinance known as “Hire NOLA” that will force construction companies doing business with the city to hire workers from inside the city.

The STAND With Dignity group labeled the issue as one that was racial, while the New Orleans Workers’ Center for Racial Justice said the issue was an issue based around immigrant workers.

Sources close to the Hayride said that the group actually went about the “Hire NOLA” issue, claiming the four Confederate monuments had something to do with the problem of black unemployment in the city.

Mayor Mitch Landrieu’s plan to remove Lee Circle, PGT Beauregard, Jefferson Davis and the Liberty monument has been met with an outcry of backlash from residents in the city.

Not only has an influential group known as Save Our Circle been formed to save all history and art in the city of New Orleans, but two recent polls show that residents and citizens of the state are overwhelmingly not on-board with the removal, including black voters and Democrats.

Interested in more news from Louisiana? We've got you covered! See More Louisiana News
Previous Article SKRMETTA: Pray For A Miracle, Work For Change
Next Article French Quarter Business Owners May Be Getting Dragged Into Fight Between City And Crime Prevention Organization