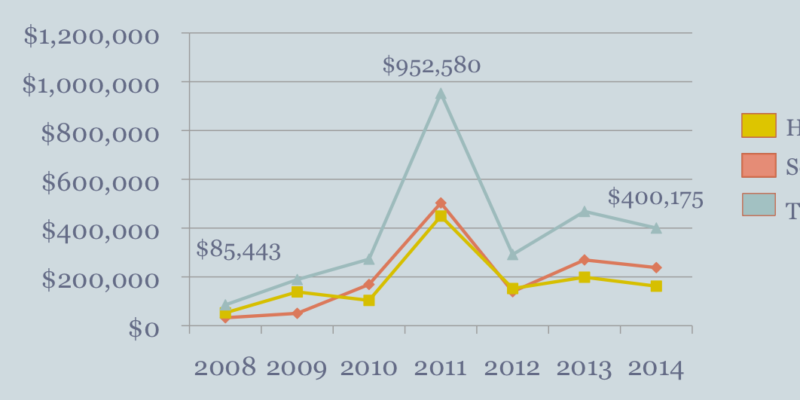 Some Louisiana journalists and activists are fond of repeating the old political saw that “the flag of Texaco flies over the Louisiana State Capitol” in a sly nod to the power of oil and gas influence in the state. But the quote, generally attributed to former State Sen. Foster Campbell, has no bearing in reality.

Indeed, if campaign cash is the measure of political clout, it’s not “Big Oil” that calls the shots in Baton Rouge. That distinction instead goes to a small cadre of trial lawyers, who have used their winnings from massive court settlements to unleash a coordinated flood of campaign contributions on elected officials in an apparent attempt to stymie meaningful lawsuit reform in Louisiana.

A yearlong analysis of more than 1,000 campaign finance reports filed between 2008 and 2014 shows the plaintiffs’ bar spent a combined $8.5 million on campaign contributions and lobbying efforts in Louisiana over the seven-year period—including nearly $2.7 million in direct contributions from trial lawyers and their law firms to sitting lawmakers.

The LLAW report, which is available online at www.LLAW.org, also shows significant growth in trial lawyer giving over time as campaign donations from members of the plaintiffs’ bar to state lawmakers have quadrupled since 2008.

TRIAL LAWYER CONTRIBUTIONS TO THE LEGISLATURE OVER TIME

This highly coordinated, multi-million dollar effort shows the lawsuit industry is more invested in fighting reforms than ever before. This powerful special interest group is expending unprecedented resources to support candidates and legislation to make our lawsuit system serve their interests, rather than the interests of ordinary Louisianans.