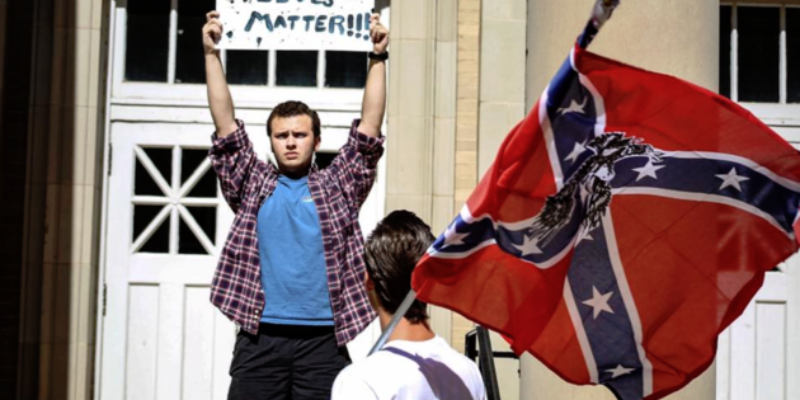 All thanks to the academics in higher education, who are only professors at universities because they couldn’t survive in the real world of the private sector. Oh and also thanks to the NAACP, which tries to disguise itself as having black Americans’ backs, when in actuality, they just want a race war.

As if it was not bad enough that the NAACP and other groups tied to #BlackLivesMatter have been demanding the removal of four historical monuments in New Orleans, they’ve also been successful with the removal of the Mississippi state flag at the University of Mississippi.

The pansies over at the Ole Miss student Senate, (which we all know consists of a bunch of rich, privileged white kids who feel white guilt for being white, much like the kind of rich kids at Loyola and Tulane), voted to remove the state flag from the Ole Miss campus.

Why? Because the Confederate flag is not a symbol of Southern Pride anymore, it’s now a symbol of all things hateful.

How? Because the NAACP and these rich privileged white kids who feel the need to apologize for being white have hijacked the meaning of the flag and driven the narrative that the Confederate flag stands for a pro-slavery movement, instead of what the majority see it as, which is Southern Pride.

Naturally the social justice warriors over at the Ole Miss College Democrats were at the forefront of the fight to take down the flag from the university’s campus. Because, you know, Democrats are soooo tolerant and all, which is why they want to tell the rest of us that we’re hateful for believing that a symbol of the South simply represents pride.

And now, Hillary Clinton is jumping on the politically correct bandwagon with the College Democrats. Clinton tweeted this out this week on Twitter: “Well done, Ole Miss. Symbols of hate have no business flying over a place of learning.”

Clinton’s probably forgetting that her husband, former President Bill Clinton (you know, the one who had oral sex with that chubby brunette White House intern), actually designed the Arkansas state flag after the Confederate flag.

But, that doesn’t matter because now, being politically correct with the academia grey-ponytail crowd will score her some political points with all the young rich, white liberal kids who feel horrible about being white.

So the Mississippi state flag is gone from Ole Miss’ campus and Hillary’s on-board. How much worse could it get?

Apparently the Ole Miss NAACP now wants the Confederate monument dedicated to those who died in the Civil War removed from campus. (Why stop at the flag when you can just get rid of all history on campus?!)

See, the NAACP will never be happy. They’ll always have a problem with something.

I remember in college just a few years ago, I covered an NAACP meeting where they actually had invited a speaker with ties to the Communist Party that yelled left and right about how white supremacy is alive and well.

That’s the kind of ridiculousness you’re dealing with when it comes to today’s NAACP.

And while the NAACP will continue to claim that removing history is all in an effort to be more “inclusive,” that’s actually the opposite because they’re excluding those who see the Mississippi state flag as a symbol of Southern Pride.

Just like the fight in New Orleans to get rid of four historical monuments, the fight to purge all Southern history off of Ole Miss’ campus will never ever end.

And we’ve got no one else to thank but the leftist professors who force-feed young people these ideas of white supremacy, conservatism and white guilt on campuses like Ole Miss all at the expense of the American taxpayer.

Can we just remove the NAACP and this weakling student Senate from Ole Miss instead of removing Southern history?

How about, if you’ve got a problem with the Mississippi state flag, go to some Ivy League school up in Maryland. You’ll fit in better there anyway with all the ugly feminists and barefoot Occupy Wall Street kids.

Interested in more national news? We've got you covered! See More National News
Previous Article All Of The Inefficiency Within New Orleans Police Department And The Times Picayune In This One Crime Story
Next Article John Bel Edwards Loves Him Some Taxpayer Funded Perks