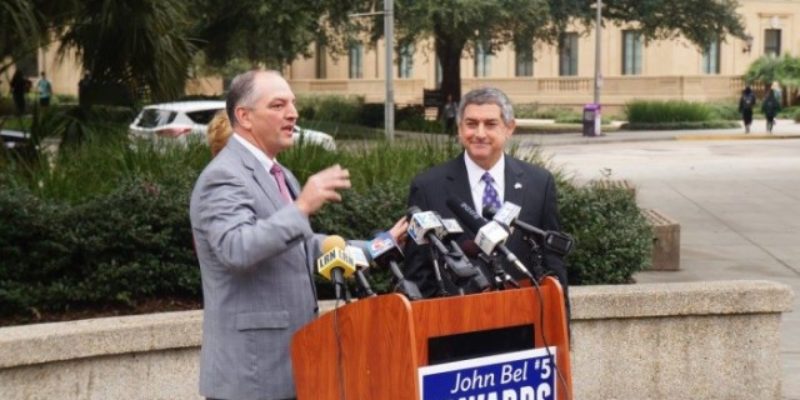 The most important political act I had ever witnessed was the passage of legislative term limits back in 1995.   At the time I was working in the State Senate and the body was considering the term limits bill, which had been adopted by the House of Representatives.

Republicans had pushed the measure and the public started to burn the ears of vulnerable Democratic senators on the issue, leading to its reconsideration after it had been previously voted down. When the bill came back up, then-state representative David Vitter walked over to the upper chamber and stood by the desk of his ally State Senator Jay Dardenne to watch the final vote.

If you would have told me then that twenty years later Dardenne would cross the political Rubicon to endorse a Democrat over Vitter, I would have been shocked because Vitter and Dardenne were perhaps two of the top advocates for political reform in the state.

Back then the Louisiana Republican universe was small, and Dardenne was one of its brightest stars.

He was a regular speaker at LSU College Republican meetings, riffing Edwin Edwards with an exaggerated Cajun accent before packed rooms.

Dardenne’s later election to the office of Secretary of State marked the beginning of the post-Katrina Republican comeback in Louisiana.

Dardenne was a good secretary of state and was one of our better lieutenant governors. Jay was a natural for the post possessing a passion for promoting our state and celebrating its unique history.

And if for whatever reason Bobby Jindal had not returned from one of his many excursions to Iowa or New Hampshire, the reins of state government would have landed in capable hands.

The stage was set for a bruising intraparty battle when three Republicans jumped in the 2015 gubernatorial race as Vitter, Dardenne and Public Service Commissioner Scott Angelle were all fighting for a spot in the runoff against Democrat John Bell Edwards. Dardenne and Angelle needed to bring Vitter’s once-high polling numbers down while Vitter needed to keep both from eating too much into his lead.

I can understand Dardenne’s resentment towards David Vitter better than most people because I’ve been in Vitter’s crosshairs myself.

Four years ago I ran for state representative in an open seat at a time when Vitter was actively backing legislative candidates. In my race there were three other candidates- a Republican who had been recruited by the business interest lobby and was capable of self-funding and two Democrats, one tied in with the unions and the other aligned with the trial lawyers.

At a minimum I was hoping he’d remain neutral in the primary, especially as I had campaigned for Vitter in his two US Senate races while the other Republican had not been involved.

Thus I was more than a little stung when the robocall came out with Vitter encouraging people to vote for the other guy- even more so when he mispronounced my opponent’s name.

But that’s politics. There are no permanent alliances, just permanent interests.

Despite that snub, I am supporting Vitter for governor because while my name is not on the ballot, the issues I care about are and he represents my position on them.

When Dardenne blessed Edwards, he was by default blessing JBE’s political posse of courthouse gang politicians, radical leftists who have seeped from Washington into the state Democratic Party and inner city political machines.

By aiding Edwards’s election he is facilitating the enactment of their policies- the very stuff Dardenne spent his political career opposing.

I don’t know if Jay was personally hurt by something the Vitter people did or said during the campaign.

Or maybe the years of distrust and enmity stemming from Dardenne exploring a run against Vitter for the US Senate in 2010 combined with resentment that Vitter’s entry into the race to make a Dardenne gubernatorial candidacy a futile endeavor from the outset and that’s what set him off to endorse Edwards.

Though after looking at the primary results, Dardenne would have probably lost out to Angelle for the runoff spot even had Vitter not run. And had Vitter not run, State Treasurer John Kennedy, his  runaway popularity and his $4 million campaign war chest surely would have.

Politics in Louisiana is a rough and tumble sport and Vitter should not apologize for playing as hard as the other guys. In fact, it was a lack of fight that led to Louisiana lagging behind many other southern states in electing Republicans to statewide offices.

Dardenne’s problems are not with Vitter or the Republican Party but the nature of Louisiana politics.

Dardenne never learned the lesson from his close call in 2011 when Billy Nungesser came within a few points of unseating him. Jay never built a solid campaign organization in his years as a statewide elected official while Vitter maintained a permanent political operation and Angelle inherited Jindal’s.

As the publisher of this site correctly observed, within the Louisiana GOP, there is a Vitter faction and a Jindal faction but no Dardenne faction, just a handful of folks from both camps who thought highly of him and casually supported his political interests.

Dardenne performed poorly in the gubernatorial campaign not because of Vitter’s negative advertisements but because he thought what worked for lieutenant governor would also work for a run for governor. While Vitter and Jindal/Angelle ran full-time political operations, Dardenne thought politics was a seasonal thing.

I wish the man who stood next to David Vitter twenty years ago to pass the most meaningful political reform in my lifetime would not have stood beside the representative of the old Louisiana way on Thursday.

Interested in more news from Louisiana? We've got you covered! See More Louisiana News
Previous Article The Low Popahirum, November 6, 2015
Next Article In Louisiana, The Insiders Are Losing