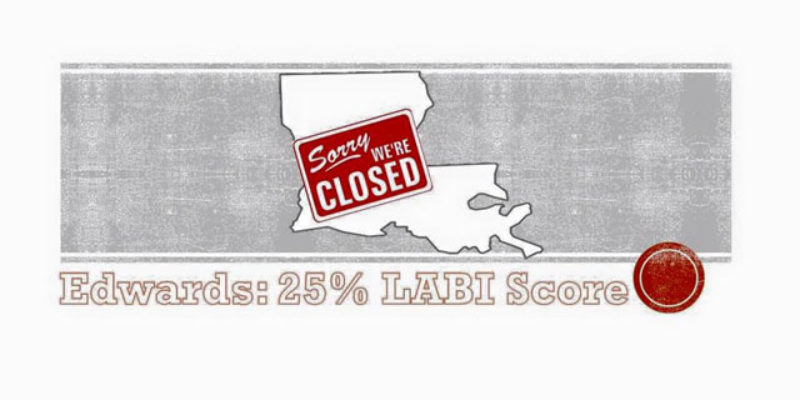 As we’ve seen throughout the course of this gubernatorial election, John Bel Edwards has made a concerted effort to hide his real record and his liberal values. John Bel is the House Minority Leader, are we to believe that he is their leader because he’s the most conservative Democrat? That’s certainly not how Nancy Pelosi became U.S. House Minority Leader.

John Bel owes his career to his cozy relationship with big unions, special interests, and far left ideologues – and he’s done their bidding in the Legislature. As a millennial, my generation deserves someone better than that. John Bel’s policies will take Louisiana back in time and will either shutter businesses or force them to move to more business-friendly climates. With that, my millennial friends and peers will go along with them, only coming back to visit family during the holidays.

To further underscore his liberal record, John Bel’s biggest supporters and donors are the same special interests who actively seek to kill Louisiana jobs and undermine our values for their own benefit: trial lawyers and labor unions. Time and time again Edwards has proved his loyalty to them. How is this remotely conservative and why would it be any different if he becomes  governor?

If John Bel wins, we will be giving Louisiana’s trial lawyers and union bosses carte blanche. This kind of power over the next four years, and possibly eight, would do irreparable damage to our economy. Not only as a millennial, but as an entrepreneur and lawyer myself, the prospect of letting unscrupulous trial attorneys sue to their hearts’ content is not only dangerous, it is unethical and downright scary—especially for those working in or around vital industries, such as oil and gas.

In fact, oil and gas jobs will flow right out of Louisiana into Texas if John Bel Edwards takes control of our state and gives his litigious friends near unlimited discretion to sue our employers and job creators—hurting the very families he purports to help. That’s why they’ve spent millions attacking anyone who dares to say they will stand up for the oil and gas industry and fight to stop lawsuit abuse against Louisiana’s energy producers. Well, I won’t be intimidated.

In an Edwards administration, John Bel and his liberal cronies will use the resources badly needed to boost Louisiana’s economy to grow the size of government. We need to keep these resources in the market, especially to bolster jobs that keep currently our young people in state while allowing continued growth and innovation elsewhere in our economy, it’s as simple as that. Are we willing to allow Louisiana’s greatest export to become its people?

John Bel stands with unions over employees in opposing right to work, rejected education reforms and school choice that hurt our students, and voted against tort reform. In each instance he effectively filled the pockets of his friends. John Bel’s values are not only on the wrong side of history, but badly misaligned with Louisiana values. These special interests propping up John Bel have never helped us.

We cannot allow our state to become a big government, liberal foothold in a sea of deep red across the South. Rather, like other southern states, Louisiana must become a haven for business development and entrepreneurship in this rapidly changing global marketplace. We must have a governor who understands this with a proven record of standing up for free enterprise and local industries. John Bel only offers the same tired ideas and failed policies that have wrecked states like California and New York. John Bel offers us economic stagnation at best; recession, at worst.

David Vitter recognizes the importance of the thousands of small businesses that are the backbone of Louisiana’s economy, and he has never faltered in his commitment to the oil and gas industry. Senator Vitter has worked his entire career to limit the influence of special interest groups, bring down the barriers of government over-regulation, and curb the influence of unions. Vitter has fought so that small businesses and entrepreneurs can succeed; he’s protected our most valuable industries; and he’s acted to preserve our way of life and environment. Because of this, I’ll be voting for David Vitter, and I encourage other millennials to do the same.

Now, more than ever, we need someone like Senator Vitter to keep our best and brightest here in our state to ensure our future success. Let’s not go back in time. Don’t let Louisiana become another failed liberal experiment. Instead, let’s elect David Vitter as our next Governor.

Interested in more national news? We've got you covered! See More National News
Previous Article HENSGENS: Louisiana’s Choice
Next Article VIDEO: Vitter Stands His Ground At Southern When Accusation Is Made That “Thug” Equals The “N-Word”