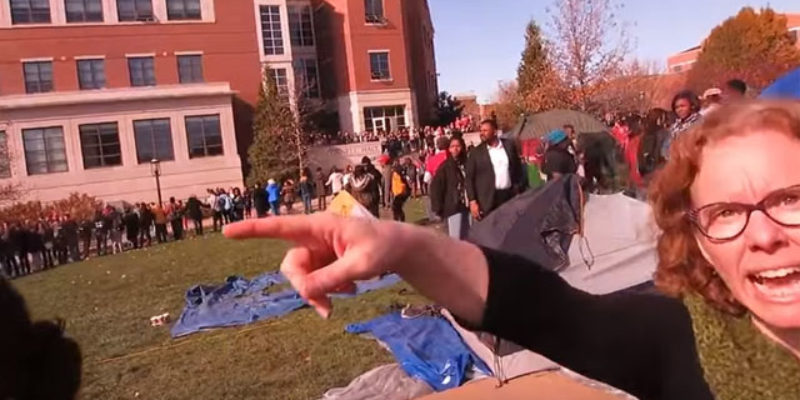 By now you probably know that a gaggle of leftist social justice warriors, aided by some large number of the players on the awful Missouri football team who threatened to strike, succeeded in getting the resignation of that university’s president and chairman. It happened following what’s been described as a string of “racial” incidents which seem either somewhat contrived or overblown – the most prominent of them being that a swastika was drawn on the wall of a building in feces (given the previous use of excrement as an artistic medium, one would have to conclude that to be an anti-Nazi statement in all likelihood, but that’s a distinction lost on the protesters), and a graduate student who seemed most disturbed by the loss of his student health insurance sparked the current unpleasantness by threatening a hunger strike until university president Tim Wolfe resigned.

The resignation hasn’t solved anything. This was the scene yesterday after he quit the field…

The loon who punctuates the show starting around the 6:15 mark is a mass media professor. Missouri, as many know, has one of the nation’s most prestigious journalism schools. Take from that what you want.

Otherwise, though, what’s obvious is this is a typical social justice warrior operation reminiscent of the #BlackLivesMatter and #Occupy circuses. Stage an angry mob over nonexistent notions of injustice – apparently there are rednecks in pickup trucks driving by with occasional confederate flags in tow, and therefore business at a major university must come to a halt – and then monopolize public spaces with threats of physical intimidation when confronted with people not part of the “movement.”

Missouri’s Democrat governor Jay Nixon, whose demonstrable failure to put down the rioting in Ferguson set the tone for what’s now happening in Columbia, should have called out the national guard yesterday to break up this protest and put to bed the notion that a bunch of shiftless neo-communist agitators can disrupt a major university. But Nixon is weak and beholden to the very barbarians destroying the prestige of his flagship university.

And now the barbarians have claimed the heads of the top brass at Mizzou as trophies. It’s only going to get worse, because there are no actual consequences in sight to the insanity there.

Interested in more national news? We've got you covered! See More National News
Previous Article PRAGER U: Game Of Loans
Next Article BREAKING: John Bel Edwards Has Not Removed The Arlington Gravesites From His Ad As Promised