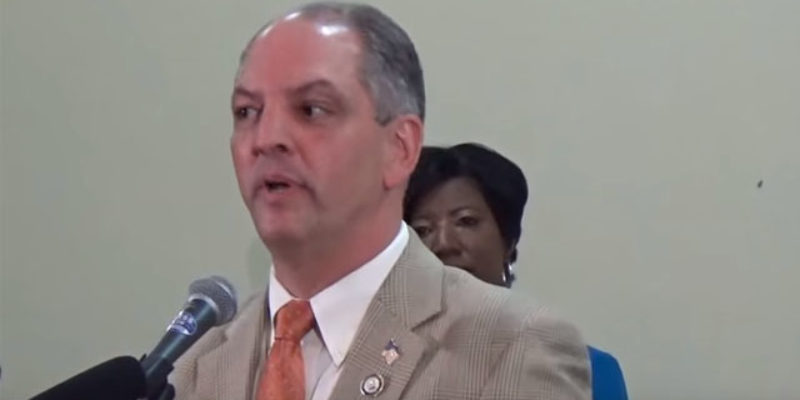 I hate to make the Hayride part of the story here, but in order to fully explain the dynamics of the Syrian migrant story and what it’s become in the Louisiana governor’s race, I more or less have to.

Namely, that on Nov. 3 John Binder wrote a piece here at the site outlining the fact that the Obama administration is bringing in 10,000 people from Syria – of course, the European countries who have opened their doors to “Syrians” have ended up getting people from all over the Muslim world, and what they’ve gotten has mostly been military-age males, and the behavior of those military-age males hasn’t been the best – and that New Orleans, Baton Rouge and Lafayette were on a list of cities where those migrants would be processed and settled, and in fact the first of an indeterminate number of Syrians were arriving in New Orleans.

That was on Nov. 3. The story got a decent bit of traffic at the time and then it started to fall off. Until Paris happened on Friday.

As you can see, once the Paris attacks happened this thing roared back to life. So much so that Tucker Carlson blurbed it on Fox News Saturday morning and Andrew McCarthy referenced it on National Review that same day. We got national attention out of the story because a very large number of people saw what was happening in Paris, heard shortly after that the gunman at the Bataclan Theater who wasn’t killed by police stated that he was Syrian and an ISIS member (and if I saw it correctly last night there are at least two of the Paris terrorists who came through Greece as refugees from Syria), Googled the question of whether those people were coming to America and found Binder’s story.

And then it went viral on social media. So much so that the rumor was started to the effect that 10,000 Syrians had already been brought to New Orleans, which is something that Binder never reported and isn’t happening. There have been 14 Syrians so far, with the likelihood there will be more.

Gov. Bobby Jindal jumped into the fray demanding information from the Obama administration on how many Syrians were coming to Louisiana; we had that over the weekend.

And when the candidates took to the trail over the weekend, Syrian migrants was the hot issue voters asked them about.

Here was John Bel Edwards’ initial release on the subject… 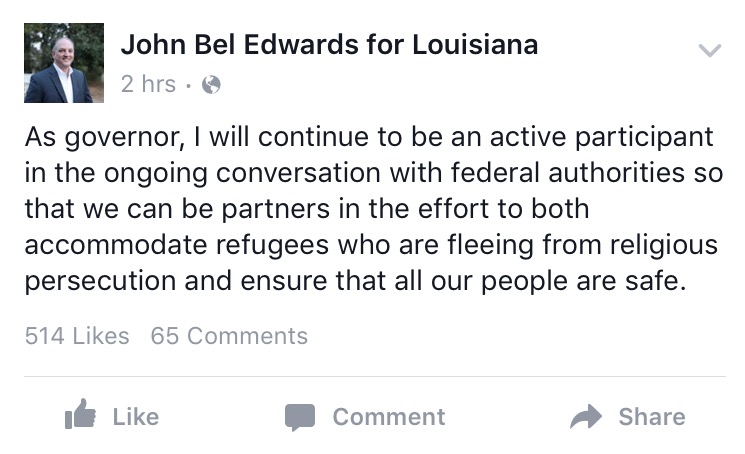 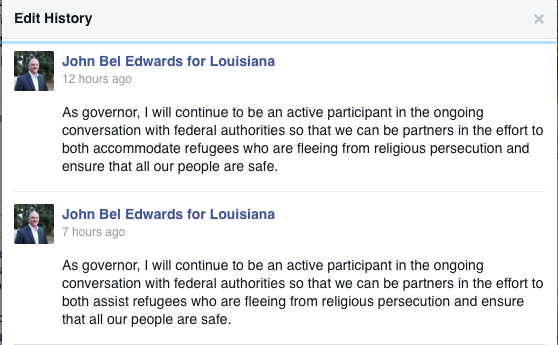 Notice the change from “assist” to “accomodate?”

The reaction even to the edited statement was ugly; there were a lot of “you just lost my vote” comments. So Edwards then put this out… 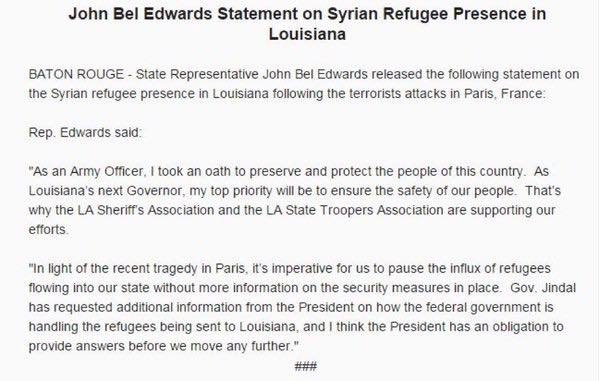 Note the change from “I’ll be part of the conversation in helping to assist the people coming here and fleeing from religious persecution” to “we need to pause the influx of refugees.”

Why is that? Well, Edwards probably didn’t realize how big an issue this appears to be with regular people in Louisiana, and how insufficient his pro-forma statement was.

Compare his initial statement with this…

“President Obama’s ‎plan to bring 10,000 Syrian refugees to the U.S. – just like his statement made a day before the Paris attacks that ISIS was ‘contained’ — is outrageous and irresponsible. That’s exactly how at least one, maybe more of the Paris terrorists got there.  These Syrians have already started arriving in Louisiana. That needs to stop immediately, and I will continue to lead that fight and protect the people of Louisiana,” said Vitter.

We are still reeling from the horrible violence of the recent attacks in Paris. As we stand with the French people, we must also take much greater precautions to prevent terrorists from settling into New Orleans as part of the current wave of Syrian refugees President Obama is sending here.

As you know, New Orleans is expecting an influx of Syrian refugees, some of whom have already arrived. Based on all the information available to me, I have no confidence that these refugees are being fully and properly vetted to ensure they contain absolutely no terrorists elements.

Please join me and others in demanding that President Obama stop accepting these Syrian refugees immediately, and stop settling any into New Orleans, given this unacceptable lax security and lack of full vetting on their backgrounds.

As you know, many other cities where these refugees have been settled have expressed strong security concerns. For instance, the New York Police Department announced this week that it is deploying all counter-terrorism resources to ensure there are no copycat or coordinated attacks in New York. We, too, are a port city and a major tourist destination, and as such, I request that the City of New Orleans and the New Orleans Police Department to deploy any and all counter-terrorism and public safety resources to crowded areas around the city, particularly the French Quarter.

Thank you for your service. I look forward to your quick response regarding asking President Obama to change his policy on Syrian refugees and your deployment of significant counter-terrorism measures.

Edwards’ initial equivocation ultimately led him to alter his position, while Vitter jumped in front of the issue and took a clear position he’s not going to move from.

That’s what you do when the voters believe you’re correct.

Edwards actually had the chance to perhaps sew up the election by calling Obama out in no uncertain terms and demand a stop to any resettlement efforts in Louisiana. He didn’t. He asked for information. But Vitter, who has worked on the issues of immigration and uncontrolled borders for years, didn’t hesitate or equivocate.

And resettling Syrian refugees is not going to be a popular idea in Louisiana. At all.

We don’t have any polling on the issue inside the state, but nationally the numbers aren’t good. In late September, Quinnipiac found the public breaking 53-41 against bringing in Syrians. On October 9, Rasmussen found that 56 percent of respondents said bringing in the Syrians would make America a more dangerous place. That was before Paris; what do you think the numbers look like now?

And what would they look like in deep-red Louisiana, with its sizable volume of strategic targets and frightening soft-target vulnerability to terrorism (LSU football games and the tailgating activity around the stadium, Mardi Gras, the French Quarter, the innumerable festivals all over the state)?

It’s not a surprise Binder’s story roared back to the top of the Hayride’s busiest-post standings. This is a serious issue requiring serious, unequivocal leadership. And Edwards’ first swing at it was a miss. He has a problem here, and he’d better hope the public isn’t as focused on the Syrian migrant issue as it looks like they are.

Interested in more news from Louisiana? We've got you covered! See More Louisiana News
Previous Article Has Scott Angelle Chosen Irrelevance In The Gubernatorial Runoff?
Next Article ALEXANDER: John Bel Edwards And The Art Of Sanctimony