THANK GOD FOR JEFF LANDRY, WHO IS GOING TO HAVE TO SAVE US.

Previous lessons have hinted at something which is going to be manifest quickly; namely, that putting the Louisiana Democrat Party back in charge of state government by electing one of its lesser lights governor is a perfect recipe for a living history lesson.

Our friend David Huguenel sums this up nicely… 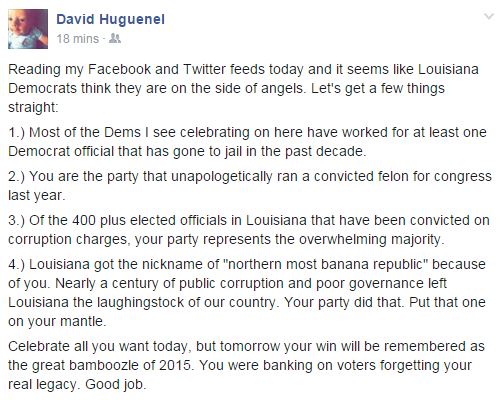 What’s coming is much more of the same. John Bel Edwards has spent the last three weeks making brazen threats against Vitter supporters which he will now have to carry out, and old-school Democrat politics – pay-for-play scams, sweetheart deals, NGO slush funds and the works – will come back to the Capitol in strength.

In fact, the subtext of the election was that David Vitter was open about scrubbing the vestiges of the old ways, the things that in eight years in office Bobby Jindal lacked the ambition or the stomach to cleanse, out of Louisiana politics and Edwards was there to defend those old ways. What do you think “Putting Louisiana First,” his campaign slogan, was all about in the first place?

The courthouse mobs and the fixers will be back in their heyday under Edwards. But there’s a catch.

No, the fact that Republican majorities exist in both houses of the state legislature isn’t a catch. Edwards will find more than enough poodles among those elephants to pass the things he wants passed.

Jeff Landry is the catch. Landry, the Tea Party Republican who made a name for himself with a combative approach toward the imperial Barack Obama while spending two years as a congressman before his district was cannibalized in redistricting, is now Louisiana’s attorney general.

And this is a saving grace amid the debacle of the 2015 election. Had Landry not unseated Buddy Caldwell there would be no effective bulwark against the old corrupt ways returning with a vengeance.

Landry, of whom it can be said lacks nothing in the way of political ambition or talent, now has a perch from which to deal destruction to the governor. He has the ability to issue opinions one after another on the legality of actions the Edwards administration takes, and it should be no surprise if he doesn’t continuously poke holes in the governor’s plans. He might not be able to stop some of the abuses to come, but he can certainly bring them to light and force Edwards to suffer politically for them.

And Landry’s office can get busy prosecuting local corruption. The damage he can do to some of the state’s more noxious local courthouse mobs and machines, both Democrat and Republican, might be considerable.

This could make Landry an unpopular figure in the same vein Vitter was as he attempted to sweep out the old ways. More likely it will make him a legend, particularly if (1) Edwards is not well received as governor and (2) some of those courthouse mobs and local machines are seen as responsible for foisting a tyrant upon the governor’s mansion.

He has the ability to make himself a leading candidate to take Edwards down in 2019. Or if not, to open the way for someone else to do it.

And along the way, Landry might just be able to force some of the aggressive reform Louisiana needs through some unconventional, and unexpected, means.