Obviously, Louisiana is a battlefield at this time and the combatants are John Bel Edwards and David Vitter. Both are seeking allies in a race not just between the Democrat and the Republican, but between, it appears, current polls and electoral fundamentals.

Edwards picked up the endorsement of the fourth-place candidate Jay Dardenne earlier this week, which was a major news story across the state though the actual effect on the electorate probably isn’t that significant. As we reported last night, before the endorsement even came down Triumph Campaigns polled the race and found that an endorsement by Dardenne for any candidate produced only 19 percent of the respondents’ saying it would make them more likely to support the endorsee and 24 percent less likely.

Since then, there has been a relatively severe backlash against Dardenne. It’s questionable whether the endorsement is even a net benefit to Edwards.

That said, while Vitter is generating a rolling snowball of business endorsements and sizable checks from the state’s industrial and commercial players, probably to coalesce into the endorsement by the Louisiana Association of Business and Industry in a matter of days, he could use a bump from the political class.

He could use Scott Angelle’s endorsement. Lots of people are sitting around waiting for Angelle to do something.

The Advocate, which is a terrible newspaper with a habit of printing stories which are either falsehoods or slanted in such a way that their agenda is relatively obvious if you know what you’re looking for, put out a story yesterday about how “a group of influential Angelle supporters from Acadiana” are planning a fundraiser for Edwards. The story, written by the same reporter who badly, and suspiciously, erred yesterday in attributing the endorsement of two high-profile business lobby groups to Edwards when in fact both had endorsed Vitter, neglects to mention that the influential Angelle supporters in question include Wayne Elmore, a former Edwin Edwards associate and long-time big-dollar Democrat political donor who was Charlie Melancon’s political patron and who put the laughable satyr Chet Traylor into the 2010 Senate race against Vitter, Gene Sellers, a Lafayette architect and longtime Democrat donor to such candidates as John Breaux, Mary Landreu, Caroline Fayard, Marlin Gusman and Bill Jefferson, New Iberia architect and longtime Democrat donor (and occasional, here-and-there Republican donor) Perry Segura, whom Edwin Edwards appointed to the LSU Board of Supervisors and former Democrat Secretary of State and Lt. Governor Paul Hardy.

These are people who nobody would expect to support David Vitter, but the media narrative in place – which is questionable in its accuracy if not suspiciously erroneous – is that Angelle’s support is moving to Edwards. There was no mention in the piece of how the Lafayette oil and gas money has been a sizable waterfall for Vitter since the primary, and a lot of it was for Angelle in the first round.

So to break through the clutter, Vitter needs Angelle. And, as it turns out, Angelle needs Vitter. The dance hasn’t quite begun, but it’s coming.

Earlier this week was this story…

Gannett Louisiana requested an interview from Angelle, who had Mills stand in as his spokesman. The two have been friends since childhood.

“I think he’s going to run — keep it going,” Mills said. “So many people have been calling him and saying, ‘Take a look at the Senate or a Congressional seat.”

Mills said Angelle, an elected member of the Louisiana Public Service Commission, has been spending time with his family and re-energizing since the Oct. 24 governor’s primary. Angelle hasn’t spoken with media since election night. “He just needed some time to clear his head,” Mills said.

“It was a tough race but he’s moving on,” Mill said. “A lot of people are telling him to run while he’s hot.”

Mills said he would like to see his friend run for a federal seat, although the state senator said Angelle is also fielding private sector job offers.

“I think he’d be perfect for Washington,” Mills said. “He’s cut out to shake things up in Washington, but he’s still trying to figure out what’s next.”

Assuming Freddie Mills isn’t completely talking out of turn, and you should make that assumption, this is one, or both, of two things.

It’s either an offer, or a threat. It’s a statement that Angelle wants Vitter’s Senate seat in return for his endorsement, or in the alternative it’s a threat that Angelle will challenge Vitter for it should Vitter not win.

To which the answer ought to be “Accepted.”

If Jay Dardenne could back John Bel Edwards in exchange for the Commissioner of Administration job, or some other job in his administration (which no one will admit to, since it would be illegal to – wink, wink – promise a position in an administration in return for an endorsement), then David Vitter could give strong considerations to appointing his popular and able fellow conservative Scott Angelle, who on the issues isn’t a single bit different from the current Senator, to succeed him as Senator.

After Vitter wins, that is. Which would be greatly aided by Angelle’s public support and endorsement.

There are a few moving pieces here, almost all of which seem to point to Angelle being a whole lot better off if Vitter is the governor rather than Edwards. First of all, since it’s highly unlikely that Angelle would support Edwards one would imagine he wouldn’t be able to stay on the LSU Board of Supervisors for very long if Edwards was the governor (his term ends on June 1, 2018). Some trial lawyer or union boss or other political constituent would get that seat. And since Angelle isn’t likely to support Edwards he no longer would seem to have the kind of stroke with a governor that would make him a valuable asset to a company like Sunoco, which now has him in a lucrative position on their corporate board. And while he’ll still be a Public Service Commissioner until 2018, one imagines a resurgent Democrat Party would probably run someone against him with an eye toward getting the third Democrat on that five-man commission.

So until 2019, when Angelle could maybe run against Edwards for governor, there isn’t a lot in the way of golden opportunities for him over the next four years. If Vitter loses on Nov. 21, he’s probably going to turn around and run for re-election in 2016 with every dime that K Street and the business community can throw his way, and if Angelle thinks the governor’s race was brutal just wait until Vitter would train his guns on Angelle for a Senate seat that Vitter currently holds.

Assuming Vitter wins with Angelle’s backing, the Sunoco job is solid and the checks are large. Vitter wouldn’t have any reason not to give Angelle a second six-year term on the LSU Board of Supervisors. Vitter would make sure that not only is he safe on the PSC, if that’s where he’d be in 2018, from any GOP challengers but loads him up with campaign cash to fight off any Democrat who might come along looking for a fight.

All of which might be obsolete considering what else Vitter could do for him.

We know that if Vitter wins, Rep. Charles Boustany is going to run for his Senate seat. It’s quite likely Rep. John Fleming will also run, and fairly likely State Treasurer John Kennedy will also get in. That’s a very tough, likely well-funded field Angelle would have to run against next year. It might not be as tough as trying to root Vitter out of his seat, but it’s close.

But if Boustany were to run, whether he won or not his congressional seat would be open. It looks like in that case state representative Brett Geymann might get in, but Geymann is a lightweight when it comes to a bid for Congress. And other than Geymann, the only other major Republican contender would seem to be outgoing Lafayette parish president Joey Durel – who might actually be the favorite for the seat.

Durel is friendly with Vitter, and there has been some talk that he would probably be a high official in Vitter’s administration. He’d make a good hire for a cabinet job. And that would make Boustany’s seat wide open for somebody like Angelle to walk into.

Or, since Vitter’s Senate seat would be open and as governor he could appoint whoever he wanted to it, he could just give him the seat Mills laid down a marker for.

Angelle would then have the same fight against Boustany, Fleming, Kennedy, maybe Rob Maness, maybe Mitch Landrieu and whoever else might get in, but he’d get to be the incumbent. So long as he didn’t go up to Washington and make a fool of himself he’d probably have the edge.

If Angelle didn’t want the seat Fred Mills would not have suggested that notion to the Gannett papers around the state. That was no accident. Vitter can deliver the seat, if he wins in two weeks. Vitter could use Angelle’s help to put himself in position to get there.

They don’t have to decide to be friends. Louisiana had a governor and a Senator who didn’t like each other for the last eight years – hell, before Bill Cassidy beat Mary Landrieu it was two senators the governor didn’t get along with – and the world didn’t end.

And yes, Angelle is in that Gumbo PAC ad talking about the stench David Vitter leaves in Louisiana. He gets asked about that, he just shrugs, smiles and says, “Hey, that’s just politics.” Conservatives love him, he looks like the guy who delivered Vitter the governor’s mansion, and he’s off to DC.

Happy endings all around.

– The only way to shame the public sector into doing its job is to take problems out of the realm of responsible governance and into the realm of political correctness.

Fixing potholes doesn’t arouse the Social Justice Warriors. Painting dick pics evocative of Rape Culture around those potholes will make them enough of a cultural regression to force the issue, as they’ve discovered in Britain.

– “Come on, Scott – you can’t go around saying good people don’t get into politics.”

This fruitcake isn’t one of them.

– Did you see Chris Christie’s speech about drug addiction? Wow. It’s one of the better non-political speeches you’ll see a politician give. He’s talking policy, yes, but in a non-political, or maybe apolitical, way. Pretty much everybody would get it.

– Ted Cruz had a helluva Tuesday.

– Let me say without any hesitation that if John Bel Edwards wanted to advertise on the Hayride he would be welcome to, at the same rate David Vitter and Scott Angelle paid.

– I don’t know what to say about this… 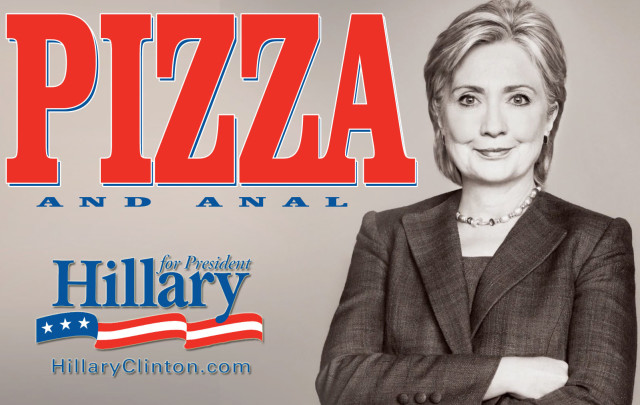 – Finally, some words of wisdom.  My grandfather, when the subject of Louisiana politicians came up, always relied on a Cajun saying: “Tous les cochons mangent a la bacque,” if I have that right, which translates to “All the hogs eat at the trough.”

Meaning that they’re all in it for themselves, and putting your faith in them to solve your problems makes you an idiot.

They can’t help you, and you should resist their efforts to try. Make them get out of the way.

Interested in more news from Louisiana? We've got you covered! See More Louisiana News
Previous Article The One Major Factor Of New Orleans’ Crime Problem That Was Never Mentioned At Mitch Landrieu’s Meeting With Gang Members
Next Article Into The Gutter Goes John Bel Edwards