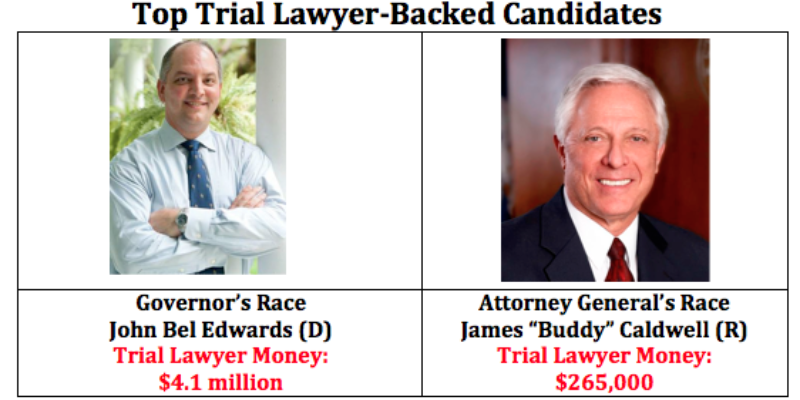 Throughout this election cycle, personal injury trial lawyers have been relentless in their efforts to expand their already-powerful political influence in Louisiana.

Emboldened by the current state of the judiciary and flush with cash from BP in the aftermath of the 2010 Gulf oil spill and from legacy lawsuits, plaintiffs’ attorneys are spending unprecedented resources to elect their friends to state and local offices. Their largess has provided critical financial support to Democratic gubernatorial candidate John Bel Edwards, incumbent Attorney General Buddy Caldwell and a number of lawsuit-friendly candidates who are running for seats in the state legislature. As voters head to the polls today, they should keep this information in mind—as campaign support is a key indicator of the programs and policies that candidates are likely to vote for if they are elected to office.

Starting at the top of the ticket, LLAW has previously reported that plaintiffs’ lawyers, unions and the national Democrats are the primary source of Edwards’ campaign cash.   Throughout this election cycle, trial lawyers have contributed more than $4 million in support of Edwards’ candidacy for governor (including $1.1 million direct campaign contributions and $3 million to super PACs benefiting Edwards).  Since Edwards has such an abysmal record of opposing reforms to bring more fairness and balance to Louisiana’s legal system, it is fair to assume lawsuit reform legislation would never see the light of day under his leadership.

But the trial bar is not stopping with the governor’s race.  During the run-off period, personal injury trial lawyers dumped an additional $112,500 into Caldwell’s campaign to keep him in the state Attorney General’s Office—which brings their total investment in the Republican incumbent AG to over $265,000 this cycle.

Trial lawyers also have their targets set on run-off elections in a few key House and Senate seats.  In North Louisiana, the race to replace term-limited Sen. Robert Adley in SD 36 pits trial lawyer Ryan Gatti, R-Bossier City, against pro-jobs, pro-growth candidate and current state Rep. Henry Burns, R- Haughton. Gatti, an active plaintiff attorney who has financially supported John Bell Edwards, has received more than half of all his campaign contributions—more than $53,000—from his trial lawyer cronies.

Meanwhile, business-backed Rep. Ritchie Burford, R-Stonewall, is in a close race with trial lawyer John Milkovich, D-Keithville, in SD 38 to replace term-limited Sen. Sherri Buffington. Milkovich has received substantial support from his friends on the trial bar to the tune of $45,000.  In the Florida parishes, Beth Mizell, R-Franklinton, is facing off against Mickey Murphy, D-Bogalusa, who has received $48,000 from plaintiffs’ attorneys.

In House races, trial lawyers have invested heavily in Casey Hunnicutt, who is opposing incumbent Rep. Ray Garafalo, R-Meraux, in HD 103.  Garofalo has been a champion for the lawsuit fairness in the House and trial lawyers have taken note.  The $53,400 Hunnicutt has received from plaintiffs’ attorneys accounts for more than 75 percent of his total contributions—a strong signal that there is a lack of support for his campaign outside of the plaintiffs’ bar. 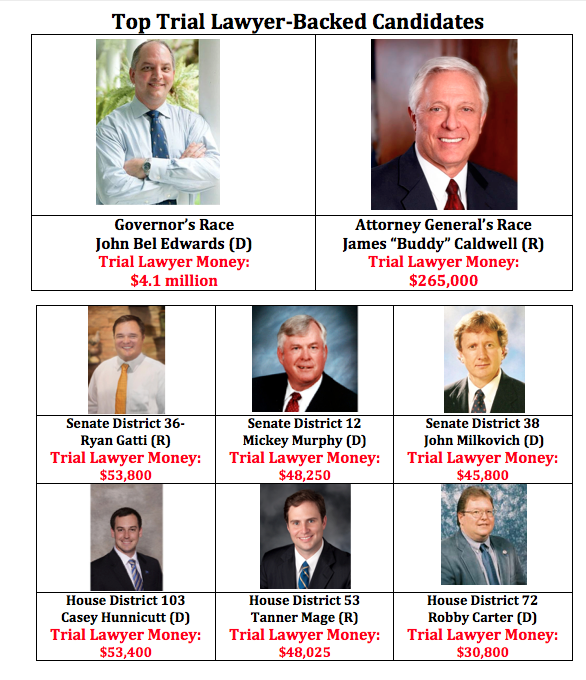