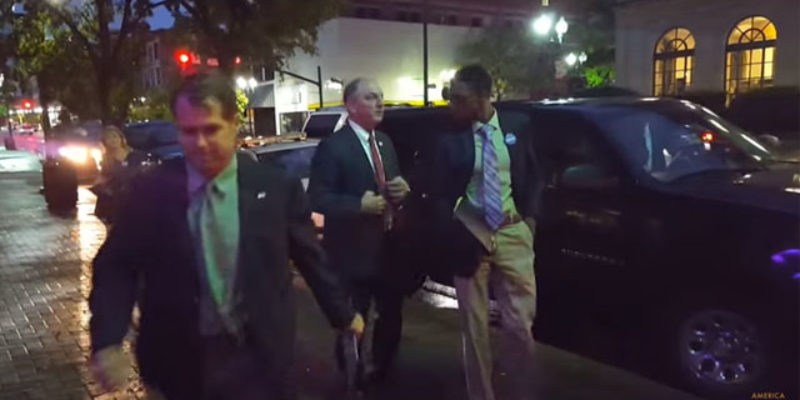 This is just a funny little thing. It’s not footage of the Loch Ness Monster or anything. But it does give you a glimpse of who these people are.

The guy asking the question is the America Rising tracker, so they know who he is and it’s unlikely they would have answered anything he asked. But still, it’s a good question that Edwards, who makes himself out to be a “conservative Democrat” and not a national Democrat despite the fact he gets all the national Democrat money and he was right there with an Obama pin on when Karen Carter Peterson was renominating Obama at the 2012 Democrat National Convention, probably ought to be forced to answer.

Does he think Obama is a good president? He ought to be able to give a simple answer to that. Or even a complicated answer to it.

If the media has asked him that question we haven’t seen it. And we certainly haven’t seen him give an assessment of the president’s governance – whether he’s lawless, whether he’s weak on foreign policy, whether his vision for American energy policy is realistic, whether he’s done a suitable job of working across the aisle (something that Edwards really ought to be on the record about since if he is able to win this election he’ll have to deal with a solidly Republican legislature), or anything else.

Forget about the partisan politics of this or the ideology, it would be worth getting Edwards’ assessment of Obama just from the standpoint of his leadership style.

And yet not only doesn’t Edwards consider the question worth answering, regardless of the fact it’s America Rising asking it, his wife tries to drown out the question by loudly greeting somebody else off-camera and then throwing a glare at the tracker.

That’s somewhat understandable, of course. The tracker isn’t there to give you an opportunity to interact with the public; they’re there to catch you on film looking stupid or extreme. Still, lots of candidates stop and give answers to trackers’ questions which go viral and give them very favorable publicity.

Perhaps John Bel couldn’t see a good answer to give on the question of what he thinks of Obama. Perhaps he knows that anything good he’d say about Obama would be interpreted as showing himself to be a left-wing Democrat and anything bad he’d say would dispirit his core supporters.

So he just walked on.