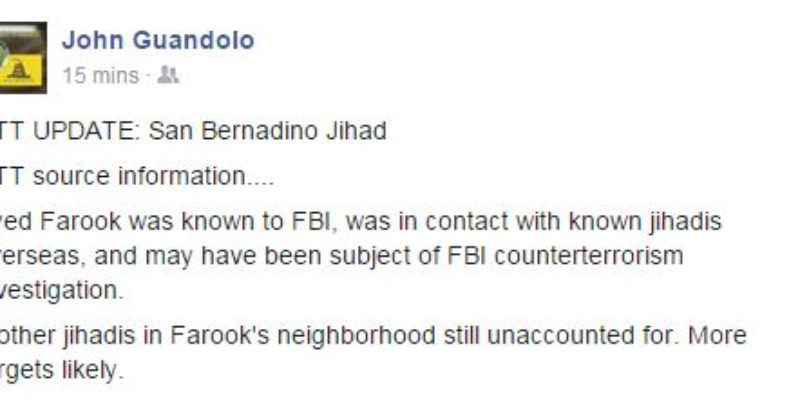 For those of you who don’t know John Guandolo, he’s a former FBI agent and a recognized expert in counterterrorism. Guandolo goes around the country conducting workshops for local law enforcement on how to spot and deal with terrorists.

And as you might imagine, Guandolo has lots of connections still with the counterterrorism and intelligence communities. So when he posts something like this, you can believe it.

It’s becoming more and more apparent that the San Bernardino massacre was an act of violent jihad, in all likelihood with international roots – we know very, very little about the wife of Syed Farook other than that she’s Pakistani, or perhaps Saudi, and he brought her from Saudi Arabia – and that it was designed as a first act in a greater play.

For example, there is all the ammunition Farook and his wife had left over from the shootout at the Inland Regional Center, to the tune of 1600 rounds or more in the vehicle they attempted to flee from police with and ultimately died in.

Then there are the stories from neighbors indicating the presence of “three to five” Middle Eastern males who were in and out of Farook’s garage before the attack (which of course wasn’t reported because of fears of being tagged as Islamophobic, showing once again that political correctness is a national security threat), and that the investigation uncovered a bomb factory in that garage.

Included in the findings are explosive devices mounted on remote-controlled toy cars, which supposedly is an Al Qaeda IED tactic.

Furthermore, there are now reports indicating the AR-15 rifles used in the Inland Regional Center attack were bought by a third party.

There is ample reason to suspect there was a jihadist cell operating in that neighborhood, and Guandolo is correct when he says the other members of that cell aren’t accounted for.

They’re at large. In the wind. And if they had alternate caches of weapons and/or bombs, they could resurface anywhere.

Interested in more national news? We've got you covered! See More National News
Previous Article In A City With No Money To Spare, Mitch Landrieu Plans To Spend Over $60 Million On ‘Resiliency’
Next Article SPECIAL REPORT: How Radical Islamic Jihadists Enter America On Visas