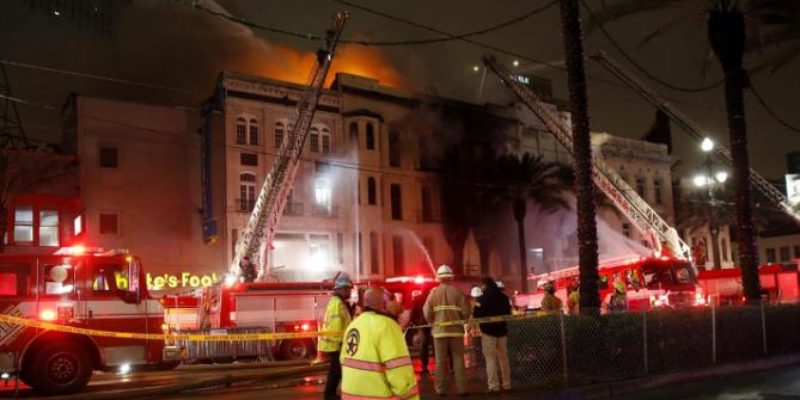 In honor of the brave New Orleans firefighters today in their efforts to put out a massive fire in the downtown area of the city, the Hayride is republishing an exclusive story which details the inefficiency within the New Orleans Fire Department (NOFD) that has gone ignored by city officials.

Usually, the Times Picayune and New Orleans Advocate, as well as us at the Hayride, focus heavily on the integral problems within the New Orleans Police Department (NOPD).

However, the New Orleans Fire Department (NOFD) may be in as bad of shape as the NOPD.

Information obtained by the Hayride shows just how dysfunctional the equipment and possibly the management of the NOFD really is, but is rarely spoken about.

Here is a string of incidents written about by a source and received by the Hayride where New Orleans firefighters are given inadequate equipment to work with while trying to do their job in a timely fashion:

On Friday, Sept. 25,2015 at about 2:30 am on Friday morning, New Orleans firefighters were kept from doing their job because of a broken fire truck.

Firefighters with Engine 38 on Clara Street got the call around 2:30 am that a car was on fire on Toledano Street. Their efforts to rush to the scene were halted by their fire truck, which would not start. The Engine Company was placed “out of service” and a backup squad from Engine 16 on Martin Luther King Blvd was sent to take Engine 38’s call.

Firefighters were then driven to New Orleans East to pick up a spare fire truck, but it wouldn’t start either.

At that point, Engine 38 was then placed “out of service” for the remainder of the night..and is still out of service this morning.

The breakdown created an unsafe trickle-down effect, because while Engine 16 was responding to the car fire (for Engine 38), a large portion of Uptown New Orleans was left with unsafe fire protection. Mayor Landrieu’s war on Firefighters is at the expense of public safety.

Before this, on Monday, Sept. 21, 2015, the high-pressure power steering line blew on the truck used by Engine 35 on N. Carrollton.

Firefighters were in the cab of the truck at the time, attempting to park the vehicle. They witnessed a loud noise, and smoke came out of the steering column. The malfunction left them with no ability to steer the fire truck. This could have been a highly tragic situation had the Firefighters been driving at the time of the incident.

A week before, three spare fire trucks were gone through by one fire house because they continued to be broken.

Note: when a fire house switches to a spare truck, it does what’s called a “change over” in which all firefighting equipment has to be taken off of the broken truck and moved to the spare. Transferring all of the hoses, tools and medical equipment can take 3 to 4 hours.

This resulted in another reduction in fire service and safety, as well as a waste of taxpayer’s money and New Orleans firefighter’s time.

On top of these problems, the NOFD’s front line fire trucks are at least 10 years old or older and they are known for breaking down on a daily basis, according to sources. And sometimes equipment is so bad, that firefighters actually will show up to scenes in pickup trucks that do not even have fire extinguishing capabilities.

Sources say the NOFD Union has made the Superintendent and Mayor Mitch Landrieu of these problems, but nothing is ever done to remedy the issues.

Additionally, sources say that previous reports about the NOFD having supposed “rehab tents” set up at large scenes where firefighters can go and rehabilitate in between the job are questionable.

Sources close the Hayride say they are not aware of rehab tents at any of the city’s fire stations, nor have they ever seen one been used.

While these large and widespread inefficiencies are strenuous and tiring for firefighters to deal with, sources say it does not keep them from arriving at flame-engulfed scenes in a quick manner.

All of this comes as Mayor Mitch Landrieu is in a court battle with the NOFD Union over millions in backpay that the city owes firefighters, but the mayor refuses to pay.

Landrieu was set to be placed on house arrest until he devised a plan to pay the firefighters their backpay, but that court order was shot down by the state Supreme Court, which ruled that Landrieu could remain free while he was appealing the court order.