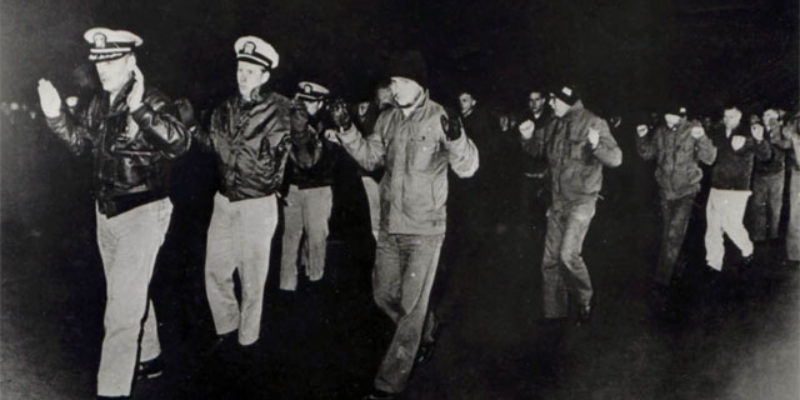 First, some context – earlier today, a pair of U.S. Navy riverine boats, which are essentially a smaller version of PT boats, were traveling in the Persian Gulf from Kuwait to Bahrain and something happened to them. It appears one or both had mechanical problems, and one or both ended up adrift in waters near Farsi Island, a tiny 7.5 square kilometer hole in the sea claimed by Iran where there is an Iranian naval base.

And those two boats, plus the 10 crewmembers on them, were seized by the Iranians. Iran is promising to release the sailors “soon,” and that might mean a matter of hours, though there are now indications they intend to claim espionage was afoot. And there are disturbingly faint indications that Iran will also give back the vessels.

Our president is supposed to give his State Of The Union speech this evening. A competent, trustworthy president would be expected to give a full report to Congress on the incident and to use the occasion to communicate directly and publicly to Iran that our expectations the boats and crew would be released immediately or else suffer disproportionate consequences.

Or, alternatively, to announce that a rescue mission he ordered promptly after hearing of the incident using Navy SEALS or other such personnel had resulted in the recovery of the sailors and their coming home on the next military flight.

Nobody really expects either, of course; if President Obama bothers to address the incident at all he’s unlikely to offer words expressing American displeasure and opprobrium with Iran or suggestion of consequences to the Iranians.

But that would make him a lot like another lame-duck president; namely, Lyndon B. Johnson, who was in the final year of a similarly failed presidency in 1968 when, in January of that year, a lightly-armed research vessel named the USS Pueblo, conducting electronic surveillance off North Korea, was captured by that communist dictatorship and its crew imprisoned and tortured for 11 months before finally being let go.

The Pueblo is still moored at the North Korean port of Wonsan, where it passes for a tourist attraction and serves as a museum to North Korean military conquest.

Pete Bucher, the captain of the Pueblo, was interviewed for the 30th anniversary of the incident by Diane Sawyer of ABC. It’s worth hearing his story in light of what a similarly savage enemy might do with the 10 sailors captured in the Persian Gulf today…