We’ve covered a couple of the early installments of this growing power struggle between the Democrat governor and the Republican attorney general, but Friday and today saw an intensification of the burgeoning conflict with a rather dismissive letter John Bel Edwards sent to Jeff Landry following the latter’s decision to intervene in the Common Core case – and Landry’s response today.

First, here’s the letter Edwards sent to Landry on Friday… 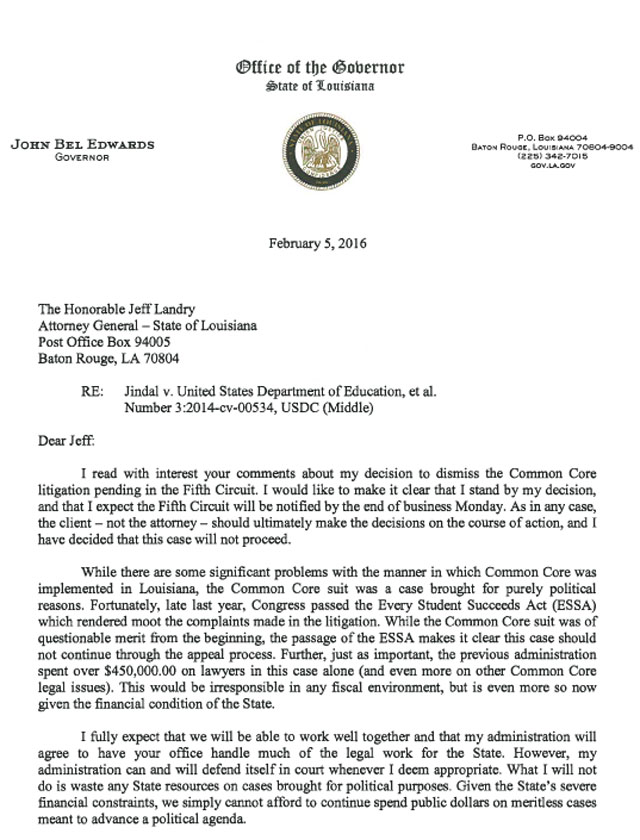 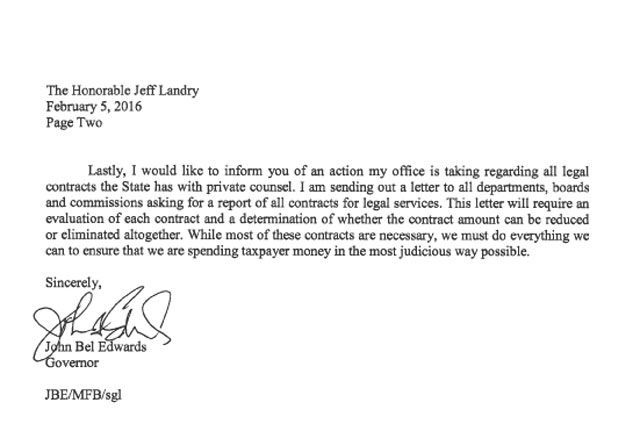 In response to a recent letter from Governor John Bel Edwards regarding procession of the appeal on Jindal v. U.S. Department of Education et al, Attorney General Jeff Landry urged the Governor to follow the State Constitution.

Article 4, Section 8 of the Louisiana Constitution declares the Attorney General as chief legal officer of the state.

“Under our Constitution, the person tasked with the authority to make decisions on the legal business of the State of Louisiana is the Attorney General,” wrote General Landry. “My ultimate clients are the citizens, not the Governor’s office or any one department or agency of state government.”

General Landry, who intervened in the Common Core Lawsuit to ensure that the U.S. Department of Education is not holding our local schools hostage, highlighted the threat that federal control imposes on freedom of speech and states’ rights.

“The principle of local control over educational content arises from concerns that federal control threatens not only Tenth Amendment but also First Amendment principles and the very foundations of democracy,” continued Landry. “If the Federal Government can control the content of what is taught by local teachers in the classroom and be immunized from judicial oversight due to this deference, the path has been paved for government to control ideas and values transmitted to our youth.”

The full text of General Landry’s letter is below:

Like you, I was elected by the voters of Louisiana to fill a constitutional position in our state government. The oath of office we took requires that we uphold the laws and the Constitution of this State. Under our Constitution, the person tasked with the authority to make decisions on the legal business of the State of Louisiana is the Attorney General.

My ultimate clients are the citizens, not the Governor’s office or any one department or agency of state government.

I have long felt that we, as public servants, should look for ways to deliver services more efficiently and effectively to our constituents. As a first-year member of United States House of Representatives, I returned over $150,000 to the taxpayers as savings from my Congressional office budget. In just a few short weeks of service as Attorney General, my staff and I have identified nearly one million dollars in annual savings within the Department of Justice. I have not only stated my belief in fiscal responsibility, but I have also practiced it.

From the first day I took office, I began reviewing legal contracts with the State to ensure they are necessary and the services provided are of the highest professional quality. I have terminated several contracts and applaud you for directing all state agencies to review their contracts with outside counsel. I encourage you to go further and evaluate the cost and value of legal departments inside government agencies.

The litigation filed against the United States Department of Education (USDOE) by your predecessor was not on behalf of the Office of the Governor; it was filed on behalf of the State and People of Louisiana.

Last week, our office learned – via the press – that you unilaterally decided to dismiss this suit in which the State is a party. My office immediately reached out to you with a simple request: give me and my office staff – highly professional, intelligent, and capable attorneys – time to internally evaluate this lawsuit. Simply put, we requested nothing more than time.

When constitutional principles that we all value are at stake, it is my responsibility as the State’s chief legal officer to precisely, patiently, and proficiently review the legal course of action. I would remind you that the pleadings of this case show the lawsuit is not just about one government program, but about federal overreach in an area of law traditionally left to state and local governments.

You have characterized the current lawsuit as being politically motivated; therefore, you should welcome an outside review of the case so that an independent determination of whether it actually is moot may be made in a timely manner, not just on an arbitrarily established deadline.

A cursory review shows the USDOE and Obama Administration plainly and openly stated its intent to divest state and local government of control over public education. They attempted to accomplish this objective by creating a new grant program, then grafting the criteria established for it into federal regulations governing existing programs and the coercive use of its waiver authority. In NFIB v. Sebelius, the Supreme Court reaffirmed the principle that such overreach is impermissibly coercive and violates the Tenth Amendment of the United States Constitution.

The principle of local control over educational content arises from concerns that federal control threatens not only Tenth Amendment but also First Amendment principles and the very foundations of democracy. The Supreme Court, in First Amendment cases, has affirmed that both what our teachers teach and how they teach it are inextricably intertwined and together constitute the “curriculum.” It is undisputed that the Federal Government, through its regulatory and waiver authority, attempts to divide the “what” from the “how.”

This threatens the First Amendment because what a teacher teaches and how a teacher teaches it are considered government speech; therefore, courts exercise restraint when asked to intervene. If the Federal Government can control the content of what is taught by local teachers in the classroom and be immunized from judicial oversight due to this deference, the path has been paved for government to control ideas and values transmitted to our youth.

It is this threat to democracy and constitutional principles that the Supreme Court recognized in Brown v. Board of Education, where the Court stated: “Education is perhaps the most important function of state and local governments. Compulsory school attendance laws and the great expenditures for education both demonstrate our recognition of the importance of education to our democratic society… It is the very foundation of good citizenship.” The Federal Government expanded its reach into education policy dramatically after Brown was decided, but every federal education funding law ever passed has preserved and respected a line in the sand that maintains state and local control over the content and standards used by teachers in the classroom. The newly passed Every Child Succeeds Act purports to preserve and reaffirm this division of authority; but without additional time to evaluate the actions of the Federal Government – it is unknown whether the USDOE continues to overstep its authority, in which case the suit may not be moot.

That is what is at stake.

I expect to work together to carry out our mutual, but separate, constitutional mandates. After our final analysis of this matter, we may agree the appeal need not continue. However, I believe it should be my constitutional right and responsibility to make that decision.

The actual merits of the Common Core case and whether it’s appropriate to continue it are a lot less important than the fact Landry and Edwards are at odds, for a couple of key reasons. First, what seems clear from Edwards’ actions in attempting to impose a Democrat Speaker of a Republican House of Representatives, his special session call heavy on tax increases that legislators are highly unlikely to treat well, and now this constitutional fight with Landry, is that he’s acting in a way which is more likely than not to diminish the power and prestige of his office. Governors typically don’t engage in losing fights in Louisiana; in Edwards’ case he’s engaging in multiple losing fights at once and those fights aren’t the type which go away. He’s going to be at loggerheads with Taylor Barras for as long as the latter is House Speaker, which is going to be as long as Edwards is governor, he’s likely to get brushed back violently by the legislature as long as he attempts to balance the state budget with tax increases rather than loosening fund dedications or making budget cuts, and he’s unlikely to get Landry off his back without finding a way to make peace with him.

And the weight of all these fights, taking place at the same time, will drag Edwards down. He’s lucky John Kennedy is running for the Senate; Kennedy will likely take time off from adding to the donnybrook over Edwards’ tax and budget policies to focus on national issues this year.

But second, Louisiana has never had an attorney general who insisted on the level of independence Landry is shooting for. As such we’ve got a really interesting constitutional question arising – just how far does the Attorney General’s independence go? Can he institute legal action on behalf of the state without the governor’s assent (answer: yes, though it has seldom if ever been done)? Can he, and this could well come into prominence a year from now if there is a Republican president who aims to dramatically change federal policy with respect to things like welfare or health care policy, sanctuary cities and so forth, veto the governor’s attempts to fight the feds?

Louisiana has always had a get-along, go-along attorney general. It has something much different now. The war between Edwards and Landry is likely to redefine the balance of power between the governor and the state’s top lawyer.

Interested in more news from Louisiana? We've got you covered! See More Louisiana News
Previous Article Isn’t It A Conflict Of Interest For Karen Carter Peterson To Chair The Senate & Governmental Affairs Committee?
Next Article The Story From New Hampshire Is On The Democrat Side