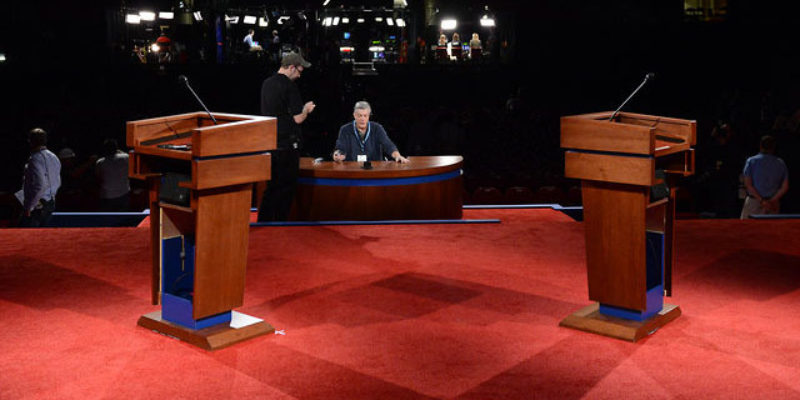 In an absolutely mind-blowing statement, Kasich’s campaign says they’re out.

“Donald Trump’s decision to scuttle the Salt Lake City debate is disappointing, but not surprising,” his chief strategist John Weaver said. “His values are out of step with the people of Utah. We had hoped to contrast Governor Kasich’s positive inclusive approach to problem solving with Trump’s campaign of division. If he changes his mind, we will be there.”

Really? Where has Kasich been in any of the previous debates where Trump was concerned? Kasich has yet to come close to engaging with Trump, other than following behind Cruz and Marco Rubio in their admonitions to Trump that asking his supporters to beat up protestors at Trump rallies only escalates violent reprisals.

It now looks like the debate won’t come off. Ted Cruz’ camp hasn’t issued a statement on what he would do.

Here’s what Cruz ought to say. If he doesn’t have any Republican debate partners, he ought to reach across the aisle. He ought to invite Hillary Clinton and/or Bernie Sanders – either one or both – to join him in Salt Lake City and let’s start the general election without Trump.

It’s a Fox News debate, in Salt Lake City. It’s hostile territory for a Democrat, but it’s the kind of free air time that Trump has been getting on Fox’s air. There’s no real loss for Clinton or Sanders if it doesn’t go well; they can just make the excuse that the deck was stacked against them.

Chances are they wouldn’t take Cruz up on the challenge. So be it. Cruz can use that talking point – he can say Hillary is afraid to debate him because she knows how devastating the outcome would be. And few would disbelieve that statement. Hillary’s cackling denials would only lend credibility to Cruz.

Cruz needs to come up with some way to capture that airtime on Fox News. Perhaps the main reason he hasn’t been able to climb over Trump, and in fact lost a lot of ground to Trump last night, has been the absolute mountain of air time Trump has gotten and Cruz has not. A graph…

It’s astonishing that Trump has gotten $1.9 billion in earned media during this cycle. Absolutely astonishing. Even if you’re a Trump fan you have to recognize how ominous it is for the media to favor one candidate so thoroughly. That’s almost as much earned media as the rest combined, and it should rightly give rise to a suspicion about whether we really are in the midst of an election…or the world’s greatest fix.

Either way, Cruz ought to see if he can’t trump the media by offering Fox the first intraparty debate of the cycle. Maybe Sanders or Clinton would oblige him.

Interested in more national news? We've got you covered! See More National News
Previous Article Merrick Garland Is As Reasonable A Supreme Court Nominee As We’ll See From Obama, And He Ought To Be Stalled
Next Article Louisiana’s Congressional Delegation Fights To Protect Medicare Advantage