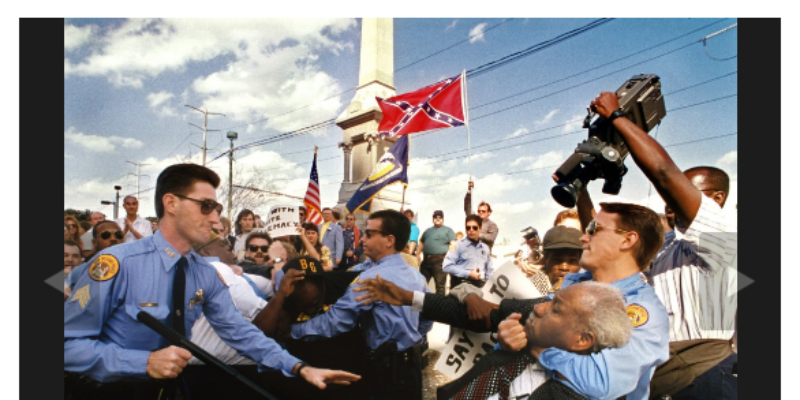 After news broke today that New Orleans city officials would have to keep four historical monuments in the public square while the removal issue is debated in the courts, the Associated Press (AP) ran with a report straight from Mayor Mitch Landrieu’s talking points: Monument supporters are racist, violent bigots.

The AP report leads with this graph:

Backlash against a plan to remove prominent Confederate monuments in New Orleans has been tinged by death threats, intimidation and even what may have been the intentional torching of a contractor’s Lamborghini.

Translation? The pro-monument crowd is causing mass chaos via death threats, intimidation and allegedly getting violent by setting fire to a contractor’s vehicle.

Of course, the AP and the rest of the New Orleans media never once reported on the anti-monument group ‘Take ‘Em Down Nola,’ when they splashed fake blood on monuments and publicly defaced public property. The Hayride exclusively reported on the incident here.

And when the New Orleans Police Department (NOPD) was questioned by residents about the videos clearly showing individuals with Take Em Down Nola vandalizing public property, the NOPD pretended that they did not hear the news or see the videos, as revealed in yet another Hayride exclusive.

Ironically, the AP goes on to quote one of the most prominent left-wing professors in New Orleans Bill Quigley in regards to the monuments.

The backlash is not surprising to Bill Quigley, a Loyola University law professor and longtime civil rights activist in New Orleans who’s worked on behalf of a group demanding the monuments come down.

Civil Rights activist? Quigley is synonymous with his far left ideology and was actually present at the vandalizing rally mentioned above. Of course, the AP never questions Quigley about his support for public vandalism, nor did the media ever report that he was present at the event.

Then the AP actually tries to compare schools integrating in the South to removing these four historical monuments. Here’s the excerpt:

The South has seen such resistance before, during fights over school integration and efforts in the early 1990s to racially integrate Carnival parades in New Orleans.

“Fighting in the courts, fighting in the legislature, anonymous intimidation,” Quigley said. “These are from the same deck of cards that are used to stop all social change.”

Translation? The pro-monument supporters are basically racist, white bigots who probably would have opposed the integration of schools back in the 1960’s.

Meanwhile, Quigley is portrayed as some sort of social justice hero fighting against the pro-monument supporters who are trying to “stop all social change.”

If the AP actually spoke to the pro-monument supporters, they would understand that they simply do not want their history removed from the city solely because Mayor Landrieu is offended.

Then, just when you thought the AP could not get any more bias, they go on to quote and portray the Southern Poverty Law Center as a racial harmony group that’s fighting evil, white people.

“There is no doubt that there is a huge amount of rage over the attack on Confederate symbols,” said Mark Potok with the Southern Poverty Law Center, an Alabama-based group that tracks extremist activity.

His group counted about 360 pro-Confederate battle flag rallies across the nation in the six months after the church shootings. Such rallies were rare before then, he said.

In all the AP report only quotes one pro-monument supporter, but only before practically blaming monument supporters for alleged “death threats, ‘unkindly name-calling,’ outrage on social media and the threat of other businesses canceling contracts.”

The anti-monument commentators noted in the full AP report outnumbered the pro-monument supporter 3-1, a typical kind of bias that the Louisiana media has become known for, specifically on this issue.

Of course, being trashed by the Louisiana media is nothing new for the members of the pro-monument group ‘Save Our Circle.’ During the last half year of reporting on the issue, they have been compared to the Ku Klux Klan and David Duke.

Interested in more news from Louisiana? We've got you covered! See More Louisiana News
Previous Article VIDEO: Greg Miller Tries To Change His Vote On The Butterfly Bill Because He Doesn’t Like Caterpillars
Next Article The Low Popahirum, March 28, 2016