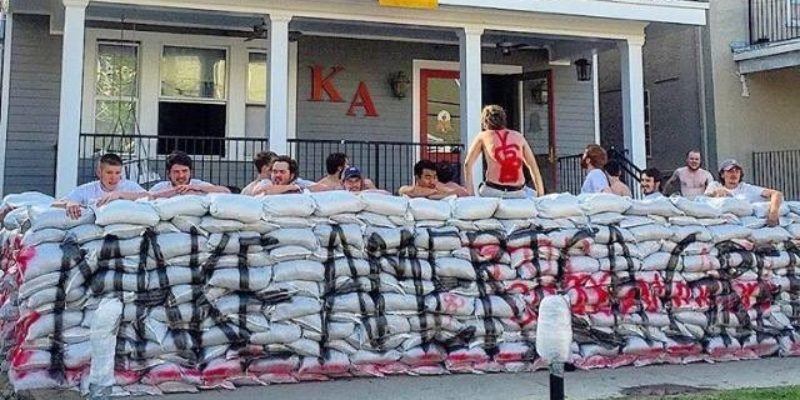 Academia is almost always upset when their leftist ideologies are criticized. But, this Tulane University official just blasted anti-free speech students who took offense at a frat house’s decision to build a ‘Donald Trump wall.’

After the Hayride broke the story about the Kappa Alpha fraternity at Tulane building their annual sandbag wall with Trump’s “Make America Great Again” slogan written across it, the frat was almost immediately met by alleged university football players who tore the wall down.

Then, the next day, a Hispanic group at Tulane started a whine-y petition in which they claimed that the frat house’s Trump wall was “threatening” to Muslim and Hispanic students. The Hayride also broke that story as well, HERE.

Now, though, Tulane’s Vice President of Student Affairs Dr. Dusty Porter has responded to the petition against the frat’s right to free speech in a very non-academic way, that actually promotes free speech.

Take a look at the full Tulane statement on the Trump wall:

Many members of the university community have expressed concern over the words “Trump” and “Make America Great Again” that appeared on a wall of sandbags at the off campus chapter of the Tulane Kappa Alpha Order (KA) on Thursday, April 7.

Tulane encourages and supports the free exchange of ideas and opinions including any expression of support for or opposition to political candidates. We also understand that while members of KA said they intended the words as satire, it sparked a visceral reaction in the context of a very heated and divisive political season.

Furthermore, the Office of Student conduct is reviewing the various reports submitted through the http://tulane.edu/concerns website and are gathering additional information in order to follow up on these reports.