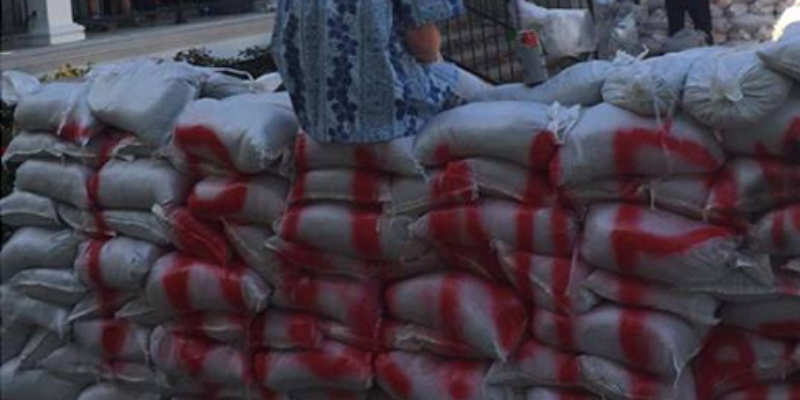 After a Tulane University fraternity built a wall with the Donald Trump slogan “Make America Great Again” written across it as satire, now a group of whining college students are petitioning the university, saying the wall is “overtly threatening” to Muslim and Hispanic students.

The Hayride reported late yesterday how the Kappa Alpha fraternity erected their annual wall with a Donald Trump slogan to be satirical. But apparently a group of football players didn’t get the satire, prompting them to physically tear down the wall, which was on private property.

Check out the video of that incident HERE.

Now, a petition which by Manali Souda already has more than 650 signatures, in which is claims the Tulane frat’s wall was “overtly threatening towards Muslim and Latino students.”

Here’s what the precious little snowflakes wrote about the frat’s Trump satire wall in full:

We the undersigned stand in solidarity with the individuals who took the brave action of dismantling the wall in front of Kappa Alpha Fraternity House. This wall, although a tradition carried on by Kappa Alpha for many years, has been a source of aggression towards students of colour on this campus, and this year, with the addition of the labels “Trump” and “MAKE AMERICA GREAT AGAIN,” has become overtly threatening towards Muslim and Latino students. Although Kappa Alpha has agreed to make changes to traditions that have previously discomforted students of colour, especially Black students, this wall and its labels prove that these promises were only superficial.
The labels “Trump” and “MAKE AMERICA GREAT AGAIN” have connotations that reverbrate beyond this campus and into the larger xenophobic and racist discourse that has surrounded this general election. Trump has suggested that Mexican immigrants bring “drugs” and “crime” and that they are rapists. He has called for the deportation of Muslims, and he has promised to build a wall between Mexico and the US that should supposedly keep out Mexican immigrants. This rhetoric is inflammatory and has direct consequences for Latino and Muslim people in the United States, especially the students on this campus. When Kappa Alpha built a wall, a physical manifestation of the wall that Trump desires, they are making his racist sentiments material. By attaching his slogan “MAKE AMERICA GREAT AGAIN” to that wall, they are sending a clear message to students of colour, especially Latino and Muslim students, that they are not welcome here. The wall is a tangible embodiment of the daily aggressions that Latino and Muslim students face at this school. Although KA has since claimed that these labels were satirical, it’s impossible to separate the “intent” of the wall from its real, direct impact, which is that it has only contributed to the exclusionary environment faced by Latino and Muslim students on campus.

We want a community free of racism, free of xenophobia, free of anti-immigrant sentiments. We want to create a community that does not tolerate prejudice and open discrimination. The actions of Kappa Alpha has threatened this community; the individuals who took down their wall have only bolstered it. In this spirit, we stand with these individuals.  If the individuals who took the wall down are targeted or penalised in any way for their actions, we the undersigned organisations would also like to claim responsibility for this act. For us, marginalised and progressive students, solidarity is more than a buzzword. We stand shoulder to shoulder with those who seek to support us. We encourage those who are interested in speaking more about this topic to contact GENTE ([email protected]) or SOAR ([email protected]).

The incident comes as college students who support Trump see a number of actions taken against them after they publicly endorse the New York business mogul.

Interested in more national news? We've got you covered! See More National News
Previous Article Mitch Landrieu Claims Former Saints Player Will Smith’s Death Has Nothing To Do With NOLA Crime Problem
Next Article The Enemies Of Education Reform Have Found A Champion In Failed Former SUNO Chancellor Joe Bouie