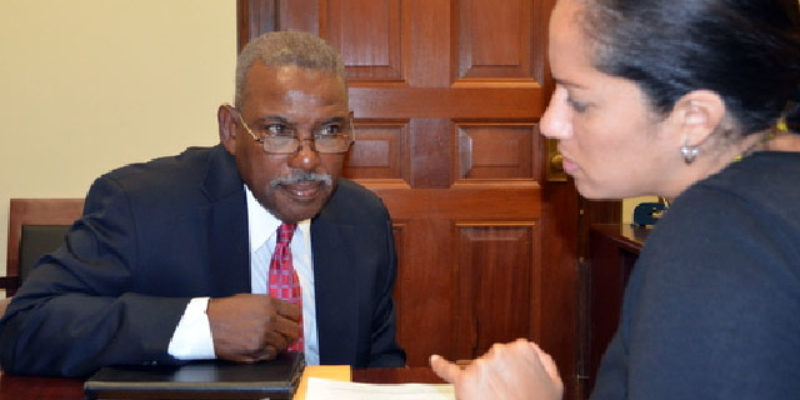 When former state representative Jared Brossett left the Louisiana legislature for a seat on the New Orleans City Council in 2014, it opened the door for his House seat to go to a man representing not just the people of District 97 but, it’s now clear, all the worst elements of the educational cartel in Louisiana.

And given Bouie’s curriculum vitae, he appears to be the perfect man for the job of shilling for the people who made education in New Orleans the worst in the Western world before Katrina and the reforms which followed it gave the city hope for the future.

Yesterday, the House Education Committee plowed through a host of bills aimed at attacking charter schools, the innovative entities which have had such a massive effect in reversing the decline in K-12 performance in the Crescent City, largely on behalf of the John Bel Edwards administration as it seeks to pay off the interests (school boards and teacher unions, most prominently) which backed his campaign. Those bills would have denied the state Board of Elementary and Secondary Education the ability to charter a school if a local school board were to deny the charter (which they usually do, since the petty tyrants on local school boards don’t get to exercise control over charters the way they do traditional schools), to place a moratorium on any new charter schools should state aid to public education be cut, which is expected to be the case this year, to place the same bureaucratic restrictions on the hiring qualifications of charter school teachers that hamstring traditional public schools and in particular to ban any for-profit entities to run charter schools.

That last was HB 879, authored by Bouie.

As an aside, there are no “for-profit” charter schools in Louisiana. Every charter school is run by a non-profit board. Some hire for-profit companies to manage or operate their school, but those companies are hired hands; they don’t own the school and the school itself is not a for-profit entity. Bouie either doesn’t understand this, though it was explained to him in yesterday’s hearing, or he doesn’t care.

The video of the debate of HB 879 can be found here. It goes 40 minutes, and if you have the time it’s instructive to watch. Bouie spouts a few talking points that he apparently wouldn’t shut up about throughout the proceedings yesterday, specifically calling charter schools a “state-sponsored experiment” which he thinks is important because what was also a “state-sponsored experiment” was the Tuskegee Experiment, the infamous World War II-era governmental abuse in which federal researchers deliberately refused treatment to black men with syphilis in order to study the disease’s effects. Bouie also called charter schools in New Orleans “illegal” and alleged that the children of the city were being held in them against their will. And for good measure he alleged that student performance in the charter schools has declined since Katrina.

House Education Committee chair Nancy Landry had a good comeback to Bouie’s incessant reference to “state-sponsored experiments” when we asked her about all this today. Rather than an experiment, she said “I think the initial authorization of charter schools in Louisiana was more akin to the breakup of the ‘Ma Bell’ monopoly, which freed us from rented land lines and overpriced services and led to innovations such as the cell phone technology we take for granted today.”

It’s a truly breathtaking performance, but it’s a little less breathtaking given that Bouie had given a preview of it during debate of the other bills attacking charter schools. Louisiana education blogger Peter Cook did a terrific job of chronicling the fiasco, including a couple of video clips of Bouie.

Here’s one in which he gets into verbal fisticuffs with Mickey Landry, CEO of the Choice Foundation, offering up the verbiage about “state-sponsored experiments” and denying there has been any improvement in academic performance in those charters.

And here’s another clip, this time with Bouie going at it with state Education Superintendent John White, when he implies his idiotic Tuskegee Experiment analogy and directly makes an accusation that the state Education Department is lying about the performance of charter school kids and gets a mouthful of irritated response from White for his trouble…

Cook explains what’s really going on behind Bouie’s flat-out lies about performance. It’s pretty simple, really – the crooks who ran the Orleans Parish School Board into the pre-Katrina sewer it occupied, in which it was the worst public school system in the country, are trying to reclaim all those charter schools and the money which goes with them back from the state…

Over the past year, momentum has been steadily behind the idea of returning RSD charters to the control of the Orleans Parish School Board. Lawmakers, school officials, and stakeholder groups have spent several months arguing over the details of such a plan and there are several different proposals up for consideration, including three bills from Rep. Bouie (House Bills 433, 1033, 1108), as well as proposals from Rep. Neil Abramson (House Bill 1111) and Sen. Karen Carter Peterson (Senate Bill 432).

For their part, RSD charter leaders have been in no rush to return to the school board. While a handful of schools entered into negotiations with the board this year, the outcome of those discussions are unclear. Meanwhile, lingering concerns about the status of a new school funding plan, as well as OPSB’s capacity and willingness to follow through on their promises, have led many RSD charter school officials to decide that the risk isn’t worth it. And of course, underlying everything is the fear that the tremendous progress seen since Katrina might be slowly erased once schools are back under school board control.

Rep. Bouie’s behavior on Wednesday makes clear that those underlying fears are valid. After all, what does it say when the leader of the return effort insists that our school system is worse now than it was before the storm? How can RSD schools trust the intentions behind a return plan crafted, in large part, by someone who clearly hates charter schools? And, how do we know that the politicians and officials who have been meeting behind-the-scenes to hammer out the details have been working in the best interests of students and families?

When it comes down to it, Bouie’s comments reveal that the push to return schools to local control has little to do with what’s best for kids (in fact, he even can’t recognize the progress kids have made before his very eyes). This is about power, it’s about control, and to a large extent, it’s about restoring the ancien régime of the pre-2005 New Orleans Public Schools system. Once schools are back in the bosom of OPSB, what happens next is anyone’s guess.

As obnoxious as Bouie’s performance is, in context it’s even worse. Because he isn’t just some retail politician who got himself elected to the Legislature. He’s an “education professional” in his own right. Bouie was a professor and administrator at Southern University-New Orleans, and in fact spent some time as chancellor of SUNO.

But it didn’t go well. Bouie was fired as SUNO’s chancellor in 2002.

Why? According to him, the firing (he was tossed out on a 9-2 vote of the SUNO board in January of 2002) came as a result of a political fight over his dismissal of Dr. Andrea Jefferson, wife of Congressman Bill Jefferson (yes, the crooked one), as the schools Vice Chancellor of Academic Affairs.

But according to most everybody else, Bouie got let go because the legislative auditor showed up at SUNO and uncovered a litany of waste, fraud and abuse that probably should have carried criminal consequences with it.

Bouie says he is considering a lawsuit to contest his firing. He says he is convinced Jefferson’s mud-slinging campaign to discredit him is the real reason for his firing, not the scathing audit released in early January by Louisiana legislative auditor Dr. Dan Kyle.

In reviewing SUNO’s books for the fiscal year that ended June 30, Kyle found a lack of controls at SUNO to assure that outstanding checks were accounted for properly.

“They can’t even reconcile their bank statements down there,” Kyle said in an interview about the audit. In addition, Kyle’s auditors found 28 checks, totaling $58,657 for student aid between October 2000 and June 2001, that had not been cashed by October of 2001.

“I get calls all the time from (SUNO) students complaining that they can’t get their money – well, those checks are probably sitting on someone’s desk, not being sent to the students. And the school continues to have problems reconciling its bank statements because those checks are outstanding,” Kyle says.

Other problems found in Kyle’s audit included SUNO’s failure to remove from its accounting records 249 students who started, but never completed, the registration process at SUNO. As a result, the school’s tuition and fee revenues were overstated by about $197,000.

Kyle also found irregularities in student-worker pay checks. Auditors performed spot checks on 36 student-worker time sheets for a pay period in March of 2001, and discovered that 19 percent were paid for more hours than their time sheets indicated. Another 36 percent of the students claimed to be working during times they were scheduled to be in class, a violation of university policy. One student was paid for 20 hours of work as a student employee even though SUNO records indicate he was not even attending the school at the time.

Bouie claims he inherited many of those financial problems when he took over as chancellor in March of 2000. But Kyle said late last month that he doesn’t consider that to be a valid excuse.

“Anytime we assume a new job, we inherit problems, but it’s our responsibility to address those problems and to resolve them – and he (Bouie) apparently has not done that,” Kyle says.

“I think there’s a serious cancer down at that place, and the board has no choice but to put in place a mechanism to solve these problems,” Clayton says.

It’s pretty clear what’s going on here. We’ve got a cabal of people who have already proven beyond a shadow of a doubt that they aren’t capable of producing a good educational product in New Orleans or elsewhere in the state, and they are desperate to get their hands on the educational resources that were taken away from them and put in the hands of charter operators – some of whom aren’t doing a great job, surely, but the beauty of charter schools is the bad operators lose their charters relatively shortly.

That cabal has an ally in the current governor, who despite his having made promises to people in New Orleans that he wouldn’t try to kill school choice where it exists has attempted a full-on blitz against it. Besides backing yesterday’s anti-charter bills, Edwards’ budget proposal released Tuesday contains a $6 million cut to the state voucher program (the budget shrinks from $42 million to $36 million) and an $8 million cut (from $15 million to $7 million) in aid the state gives to non-public education for things like textbooks and transportation.

That the cabal of teachers’ unions, school boards and Edwards would allow Bouie, who better represents educational incompetence and mismanagement than almost anyone in Louisiana, to run a bill decrying the theft of resources and abuse of students among for-profit companies in charter school management only shows how unsophisticated this attack on school choice really is.