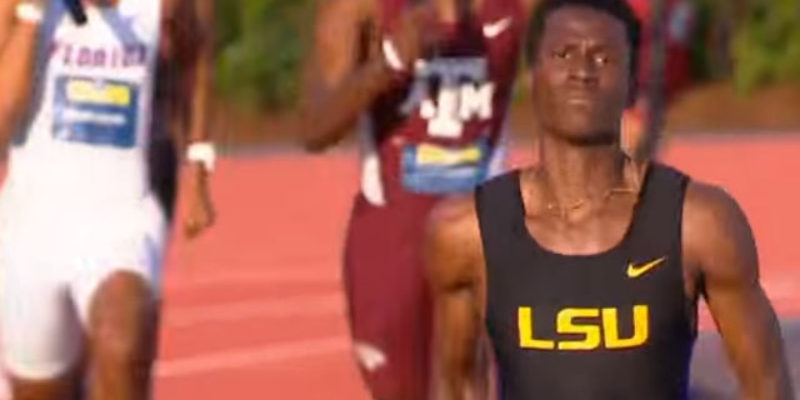 This happened over the weekend. LSU didn’t exactly tear it up at the SEC meet, finishing 4th (there was a time not long ago when LSU used to win national championships in track and field; now, they’re in the top half of the SEC). But the final event of the day, the 4×400 meter relay, was a real highlight of recent Tiger sports history.

The time of 3:00.48 set the SEC meet record, but it’s not even the season best – that was set earlier this season at 3:00.38. Both those times rank as the fastest on the planet this year.

You read that right. If LSU’s 4×400 relay team was an Olympic 4×400 relay team they would be sitting on a gold medal right now. The current USA team, as the announcer noted, is running a couple of seconds slower than LSU is.

So why not just make these guys the Olympic relay team? Well, that’s a little hard to do. Why? Here’s who’s on the team…

So the first three guys would work, but you’d have to replace Dunkley, the anchorman, if you’re going to make this an Olympic team.

Still, don’t be shocked to see Bruton, Cherry and/or Grayson wearing red, white and blue in Rio this summer, or four years from now. They’re pretty strong in the 4×400 relay.