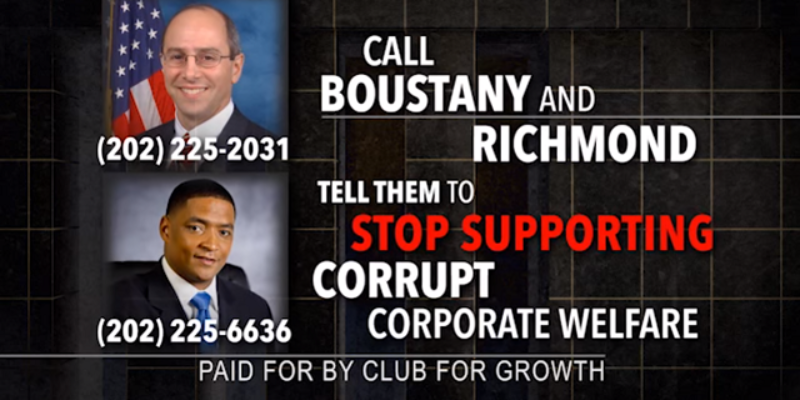 The Club For Growth has sent its biggest signal yet that they plan on playing in Louisiana’s congressional elections this year. They have released an ad blasting both Congressmen Charles Boustany and Cedric Richmond for supporting the Ex-Im bank.

The Club for Growth has already endorsed John Fleming in the Senate race. But the only other candidate who has declared so far against Cedric Richmond is outgoing Baton Rouge Mayor-President Kip Holden. It’s highly unlikely Holden will be endorsed by the Club.

The ad isn’t so much targeted at Cedric Richmond as it is at Charles Boustany. The Club really wants to beat Boustany this year. He only has a 65% lifetime score with the Club and they certainly don’t want to see him in the Senate.

For those who thought the Club endorsing Fleming was just to give him another “name” to add to his endorsements, this ad proves that line of thinking wrong. The Club is going to go in for Fleming. Which means they’re going raise money and air TV for him.

But don’t cry for Charles Boustany. He has Allee Bautsch raising money for him. The oil and gas industry is also stepping up big for Boustany and the U.S. Chamber of Commerce and their allies will be expected to support Boustany as well.

Once again, the Club and the Chamber are going to go to war like they did in 2014. Louisiana is going to be one of their battlegrounds this time. The Chamber was one of the big winners in 2014 and they will be looking to add Louisiana and Charles Boustany to the list of their victories.

But there’s the 800 lb. gorilla in the room named John Kennedy that may wind up denying both groups a victory in Louisiana. Both Boustany and Fleming have to find a way to knock him off before they can have their ideological showdown.

Interested in more national news? We've got you covered! See More National News
Previous Article Mayor From One Of Most Dangerous Cities Lectures On National Security, Doesn’t Mention Islam Once
Next Article The Battlefield, June 17, 2016: Why Would You Want To Deny Terror Suspects A Chance To Buy A Gun?