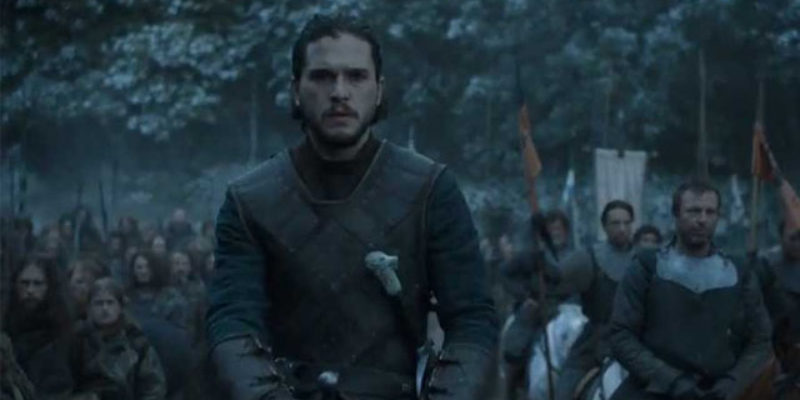 I don’t know if I’ve ever done a Game of Thrones post here at the Hayride, but if ever there was a good time to start one this is it. As many of our readers know, Sunday night is the Bastard Bowl – much, or most, of the upcoming episode will be taken up with the epic looming battle between the armies of Ramsay Bolton and Jon Snow for hegemony of the North…

The word is the battle took six weeks to film and involved over 500 extras. This is going to be epic, epic TV.

If you’re watching the show, you know how huge this is. You probably also know these three things are coming – yes, there are spoilers here.

First, Jon Snow’s army isn’t enough to win – which means he’s going to need, and in all likelihood get, last-minute, perhaps decisive help. We know, thanks to the absolute geeks at Reddit, that in last week’s episode Sansa Stark sent a letter to Littlefinger asking him to bring the Knights of the Vale to Winterfell to join the battle.

It’s been said that the Knights of the Vale are the only fresh army left in Westeros after the events covered in the books and the TV series, so if Sansa’s Hail Mary were to find its receiver that could be decisive.

And one of the things which is a lot of fun about Game Of Thrones is its unpredictability. You’d expect that to mean there’s a big plot twist coming and the fact Sansa wrote to take Littlefinger up on his offer to bring the Vale into the battle would indicate that’s not actually what will happen.

On the other hand, you didn’t actually think Ned Stark would get his head chopped off either, did you? That was coming for a while, it was obvious it was going to happen, and yet everybody was surprised when it did.

As many characters on this show as are rubbed out by the writers, Rickon never stood a chance. We’ve seen very little about him and his travels, so it’s a no-brainer he’s a goner. And the pattern with Ramsay would indicate Rickon’s going to get whacked in a highly-public, gruesome and incendiary way.

It’s entirely possible we’ve had some foreshadowing as to how. In last week’s show Jaime Lannister threatened to catapult Edmure Tully’s son into Riverrun without a parachute; maybe that’s what Ramsay will do to Rickon as he sends missiles into Snow’s army.

However way he goes, he’s going.

And finally, the victor. It’s almost assured that Snow’s army wins – after the Red Wedding episode it’s just not possible that the Starks lose yet another one of their protagonists. And we’ve got one more episode to go in Season 6 – there is no way to continue the story line in the North without Jon Snow in it, and you can’t have a 69-minute season finale in which nothing is happening in the North.

Think about it – whoever wins the Bastard Bowl is going to be on the front lines in defending against the White Walkers on the other side of the wall, likely next year in Season Seven. The show is not sellable if that’s Ramsay Bolton – the audience will be rooting for the undead. The only way this really makes sense is that Jon Snow is the hero in the North and he either teams up with Daenarys Targaryen when she shows up with her dragons and her army or he carries out the fight for humanity in the North alone while the rest of Westeros is enmeshed in yet another war.

And if Snow wins on Sunday and declares himself King in the North, as his brother Robb did, we have the interesting specter of Jaime Lannister and his army having recently won Riverrun, with a fresh challenge to his north and a dire situation with his sister in the south. Should Ramsay win you lose that prospect; Ramsay is, after all, an ally of the Lannisters. There would be no reason for Jamie to march north.

Will all three of these predictions come true? Probably not. It’s a good bet two of them do and the other is almost correct but off by an amount significant enough to change the arc of the story. We’ll check back on Monday to see how we did.