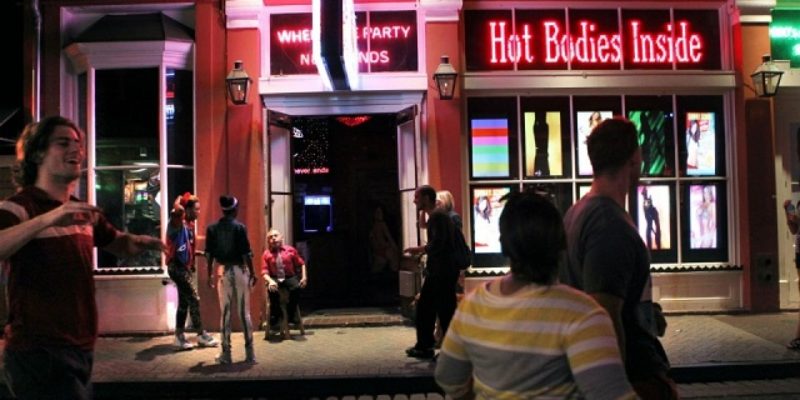 The New Orleans City Planning Commission is considering a plan that would eventually close all strip clubs in the city outside of a narrow entertainment district on Bourbon Street. If the city adopts the City Planning Commission’s plan, it would close most strip clubs in the city. The reasoning behind the plan is that it would cut down on drugs and prostitution.

The City Planning Commission did not consult the strippers of the city though and they’re unhappy about that. On Monday, they made their voices heard at City Hall.

Dancing provides a unique opportunity for women, said a dancer at Larry Flynt’s Hustler Club, speaking before the City Planning Commission, which is considering a proposal to significantly reduce the number strip clubs in the city. The flexibility and high pay allow dancers to pursue their passions. To close the clubs is to close the door on the ability of hundreds of women to live out their dreams, she said.

Contrary to what some would have the commission believe, “we can think and make decisions for ourselves,” said a dancer named Michelle, a 10-year veteran of the industry. “We choose to work in this industry because of the voice that it gives to us.”

This plan is little more than restraint of trade. Exotic dancing is a legal profession in the city of New Orleans and the state of Louisiana. It’s no doubt that the clubs that in the Bourbon Street district that survive would be urged to make “contributions” in order to keep their permits to keep their clubs open. The city of New Orleans can never turn down yet another graft opportunity.

There’s also another group that would be impacted by the New Orleans City Planning Commission if their restrictions go into effect, gays. Or as Donald Trump calls them “the gays.”

The staff report also seemed to ignore the potential its recommendation had to devastate the market for gay adult entertainment.

Until recently there were at least two gay bars on the uptown side of St. Ann Street that offered adult entertainment, Lucky Pierre’s and the Rainbow Room, but they closed. The remaining adult entertainment venues catering to a gay audience are all on the downtown side of St. Ann, outside the zone recommended by the planning staff. If they went out of business, new bars could not replace them, under the proposed rules.

Should any slots come open further up on Bourbon Street, in the recommended zoning district, a gay club would be free to vie for the permit. With so few permits available, property owners would be able to name their price, though, leaving only the most profitable clubs, likely those with the broadest customer base, capable of competing.

I mean I’m sure the city is planning for the loss of revenue by marketing the city’s high crime as a reason to visit, but why take the risk?

Now if the city wants to do for prostitution what they’ve done for crime, they should take a lesson from the past.