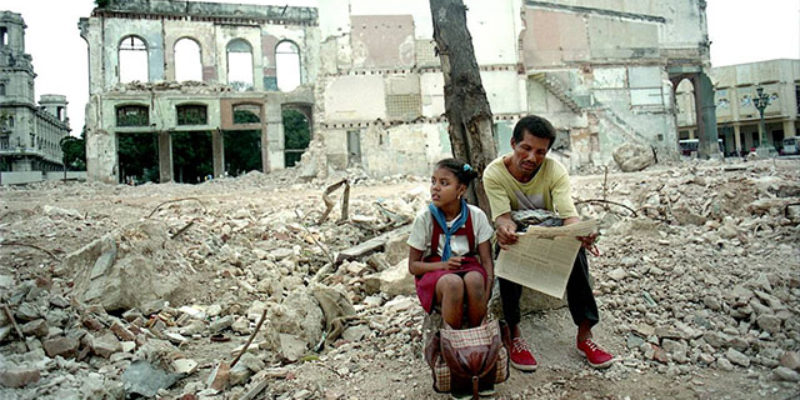 Brave Odysseus had to know; he had to feel for himself the powerful pull of the Sirens’ calls. But Odysseus had an advantage, the Gods had warned him that to succumb to temptation meant certain destruction. But despite being forewarned Odysseus still felt compelled to understand, so he had himself lashed to a mast and wisely had his crew put wax in their ears so that they too would not be drawn by the Sirens’ calls.

Though the Odyssey is but myth, the metaphor to the allure of the call of democratic socialism fits our current times. A socialist political philosophy, espoused by Obama, Warren, and Sanders is the driving principal of the modern Democrat Party, but it is just as treacherous as the rocks of the Sirens’ island.

Ironically a great example of the tragedy of state sponsored socialism is very near to us and, just as did the Sirens, it resides in an island. Cuba before it’s revolution had the second strongest middle class in the Western hemisphere. Havana then was the Paris of the West, filled with fabulous wealth and magnificent architecture. But something happened; misguidedly the people responded to the Sirens’ call of socialism, the same call that our own modern democrats are rushing toward as they embark upon their political convention.

The result in Cuba after 60 years of state socialism is amazing. On average, every day in Havana three buildings, those very symbols of the past wealth of the middle class, collapse into rubble. The average income for Cuban citizens today is less than $20 per month. That is no typo, it is $20 per month!

There is no middle class; socialism has eliminated all family wealth and everyone is what in the US we would call the very poor. There is no paint, no windows, no air conditioning, few TVs, cars held together with twist wire. The government has instituted rolling blackouts because there is a lack of fuel for energy generation. The highest paid people in Cuba are taxi drivers who get tips; not engineers, doctors, or all the other professionals valued by the prosperous West.

Socialism has destroyed almost all investment and entrepreneurship. For all practical purposes the state owns all and controls all. To invest in Cuba the investor must give 51% to the government and is subject to overwhelming taxes, rules, and regulations imposed by the government.

And what have the Cuban people traded their freedom and prosperity for? They have traded all for the Siren call of big government promises, the same promises that today’s democrats are trying to outdo themselves over. According to socialist policies, Cubans needn’t worry about hard work, about creativity, about pushing their society forward. The government takes care of all that; all citizens are equal no matter of their talents, hard work, or education and therefore all are treated the same.

Sound familiar? It should, the programs proposed by the democrats in the run up to their convention are the first steps toward the very socialistic state that they want us to trade our incredibly prosperous economic system for. Sadly, the promises of big government and faux equality has driven the once prosperous Cubans to an incredibly low standard of living; a standard that is lower than almost all who live in our country.

Clearly Margaret Thatcher was right “The problem with socialism is that you run out of other people’s money.” Let me make a bold observation, the Cuban addiction to socialism would have collapsed decades ago except that they were propped up by money from, first the USSR, then from Venezuela. But now the gravy train is over, these countries’ own economic experiments have failed and as the Iron Lady had mused, Cuba is now out of other people’s money! If the democrats have their way, as has occurred in Cuba our economy, once nourished by free market principals will lose its great potential. When that happens where will the money come from that they will need to feed the insatiable appetite of socialism?

Clearly just north of the foundering island of Cuba we have a major American political party who is succumbing to the same Siren call that the Cuban people gave in to a generation or to  ago. It seems that Sirens don’t only reside on islands, they also reside in the American media and classrooms.

Homer created the story of Odysseus to teach a bold lesson to the ages. The excitement and promise that was the promise of the Sirens’ calls, belies disaster and death on the rocks of their island. Let the words of Homer be a strong warning to the people of the United States; there is no path to a strong nation offered by democratic socialism as is being promoted by Sanders, Obama, Warren, and now pandered to by Clinton. There is only a path to an impact upon the rocks of economic malaise and loss of national strength.

We Americans must heed this warning; there is no bright future in state sponsored socialism, only a poor country in which all would live at the lowest common denominator and in which our freedoms would be ceded to the state.

If Homer were alive today he may well have placed his hero at the helm of the ship of state and have had this champion of the ages steer the American people to a safe harbor far from the false promises that the Democrat Party has put forth. Poverty and economic decline is the call of the socialist Sirens and hopefully the warnings of the Gods of old will help us prevail!

Interested in more national news? We've got you covered! See More National News
Previous Article Well, The Reviews Are In On Trump’s Speech, And Mel Brooks Has A Reaction…
Next Article HITHER AND YON: Election Season Has Begun In Louisiana