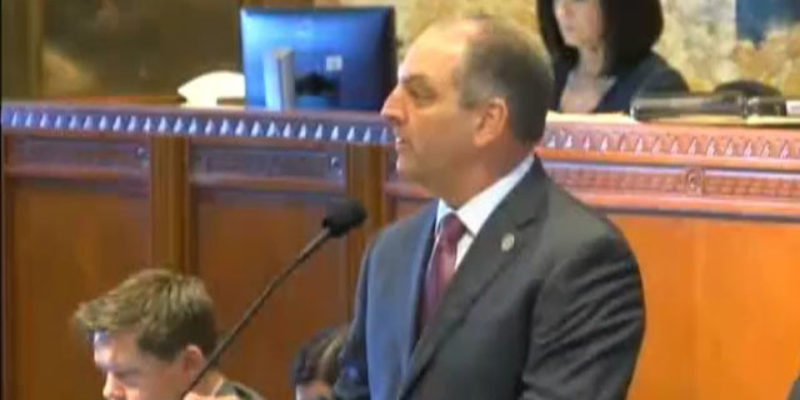 In an especially cringe-inducing episode of The Office, the show’s hapless protagonist, Michael Scott, is forced to face an uncomfortable reality. The Dunder Mifflin regional manager once promised a class of third-grade children that he’d pay for their college once they finished high school, and now, the kids, whom he’s predictably nicknamed “Scott’s Tots,” are all grown up.

They’re about to graduate, and they’ve got deeply held educational goals and professional aspirations. Thanks to Scott, they’ll be well on their way.

In gratitude for his anticipated generosity, the high-schoolers perform a song-and-dance tribute, rapping, “Mr. Scott, what ya gonna do? What ya gonna do to make our dreams come true?” The paper salesman, who at first is foolishly beaming with pride as they heap praise upon him, suddenly realizes he’s about to shatter their dreams.

Scott, whose own professional success fell short of his characteristically unrealistic expectations, is forced to announce he does not have the funds to send them to college. The episode was unusually dark for the NBC comedy, and many television critics and fans found it simply too painful to enjoy.

In Louisiana, there are 17 impoverished families enduring a real-life “Scott’s Tots” nightmare as they watch educational opportunities slip through their fingers. Last week, these Louisianans learned that the school-choice vouchers promised to their children would be yanked from them just a month before the start of the academic year.

Nikesha Hudson is one of the tens of thousands of parents in Louisiana who have, out of devotion to their children, fought to place them in private schools that participate in the state’s school-choice program. As the public-school system crumbles around them, these parents perform the due diligence necessary to enroll their children in area Catholic schools that offer the faith-based structure and consistent academic excellence that put their children on a path to achievement.

Her daughter, Nicole Jack, was a prime candidate for Our Lady of Prompt Succor. Despite coming from a disadvantaged community, she demonstrated real academic potential; her mother knew she’d be the perfect fit for the school-choice program and their desired Catholic school.

“My daughter is very gifted. She makes straight As, and she reads beyond her grade level, so she deserves to go to a better school,” Hudson told WDSU in New Orleans.

So Hudson applied for the Louisiana Scholarship program in hopes of qualifying her daughter for the $4,800 tuition assistance. In April, the family learned she was approved by the Louisiana Department of Education. The agency cautioned that her placement was contingent upon continued funding for the scholarship.

In the meantime, lawmakers in Louisiana fought about the future of the state’s fiscal solvency. Democrats, including the newly elected Democratic governor John Bel Edwards, pointed the finger at the outgoing Republican governor, Bobby Jindal, for a $2 billion shortfall. Edwards even went so far as to threaten to shut down Louisiana State University football, in hopes of stirring up panic in the community and imposing a sense of obligation to raise taxes.

As a state representative running for governor, Edwards needed to convince a conservative state to choose him over embattled Senator David Vitter (R.). Part of this effort included a promise to protect the state’s popular school-choice program, even as other difficult budget decisions had to be made. The voters bought it.

“The governor said no child would lose the scholarship because of the budget cuts,” Hudson reminded WDSU.

With that guarantee from Governor Edwards in mind, Hudson shelled out the $300 for her daughter’s school uniforms. The family eagerly anticipated joining the Our Lady of Prompt Succor family, but they grew concerned when they received no correspondence from their new school.

“They looked at the list and my daughter’s name wasn’t on the list,” she said.  She was told, “Well, maybe she’s one of the kids that got cut.’”

Hudson learned that her daughter was one of 17 children whose scholarships were terminated.

Hudson was told that “the state said they would send out a letter and notify the parents, and that’s why the school didn’t,” she explained Tuesday. “But that didn’t happen until [Monday].”

She finally received an e-mail from the Louisiana Department of Education that blamed the state’s funding challenges for her child’s losing her scholarship to attend a Catholic school.

“I don’t know what to do because I have all these uniforms, and my daughter is crushed because she thought she was going to that school,” she said.

Hudson is infuriated that Governor Edwards broke his promise to her, but perhaps she shouldn’t be surprised. School-choice advocates were always worried that he was an unreliable ally who feigned moderation only to win his gubernatorial election. They feared that at his core, Edwards was as liberal as any other Democrat, and for that reason, would be unlikely to advocate for school choice in the face of pressure from teachers’ unions.

They had good reason for concern. In 2008, Edwards voted against legislation that authorized $10 million for private and parochial scholarships for low-income students in New Orleans as the city struggled to recover from the worst natural disaster in U.S. history. The bill passed even without the support of Edwards, a self-described Catholic.

The unions were pleased with his loyalty. He redoubled his efforts on their behalf in 2010, joining their fight against a bill that would give local schools the authority to request waivers from specific state regulations in hopes of boosting academic achievement. Edwards justified his position by claiming that loosening the regulatory stranglehold on a post-Katrina educational system would create “havoc.” Again, Edwards was on the losing side of the issue, and the bill passed without his support.

With two historic losses behind them, the teachers’ unions were delighted when Edwards, ever their faithful friend, introduced a bill in the state house that would put crippling restrictions on Louisiana’s thriving charter-school system. It went nowhere.

When Governor Jindal proposed reforms to improve accountability in the state’s failing public schools, Edwards was one of the most outspoken opponents to any changes. His wife, Donna, told the Times-Picayune that that was because she and her fellow public-school teachers “ben[t] his ear” about how Jindal’s proposed educator-accountability standards “hurt” them.

When Edwards announced he would run for governor, the teachers’ unions lined up to repay him for his steadfast service to their cause. The state’s two largest teacher labor lobbies, the Louisiana Association of Educators and the Louisiana Federation of Teachers, pooled their money to promote his candidacy.

Even national union interests sent money, prompting local political commentator Jeremy Alford to marvel that the union spending “could potentially become a second source of organization and money outside of the Democratic Party for Edwards.” In February 2016, the Times-Picayune wrote that teachers’ unions “arguably played the biggest role getting him into office.”

This worried a lot of government watchdogs and even a liberal press. Prominent publications, including the left-leaning editorial board of The Advocate, condemned Edwards’s allegiance to the unions over a school-choice policy working well in Louisiana. The Democrat was defiant, confirming his willingness to advocate for their interests.

“I get painted as a person who is close to teachers’ unions,” Edwards said on stage at D.C. event with a prominent National Education Association leader. “I’m not going to distance myself.”

In May 2016, the Times-Picayune noticed that ten of the 27 bills in Edwards’s first official legislative package were related to K–12 education. Unsurprisingly, they toed the line for public-school unions.

“No other public policy area — including health care and criminal justice — got that many bills backed by the governor,” Times-Picayune reporter Julie O’Donoghue says.

With a conservative legislature, Edwards’s union-backed agenda saw virtually no movement through lawmaking channels. But, thanks to the state’s French and Spanish governing heritage, Louisiana’s governor arguably maintains the most power of any in the country, so Edwards still had a budget tool to meet the needs of his most important ally.

When the state’s budget pressures surfaced, Edwards saw his opportunity. He could send a signal to the public that its insistence on maintaining educational justice for impoverished families in the form of scholarships to private schools was simply not in line with the way he was going to run Louisiana. Teachers’ unions came before such kids as first-grader Nicole Jack.

And he had his excuse: budget cuts. While the state allocates nearly $3.5 billion to its education department annually, Governor Edwards’s team felt it appropriate to take away the $4,800 scholarship from 17 families who wanted to give their kids a better life.

Meanwhile, Louisiana spends $10,490 for each pupil enrolled in the state’s failing public-school system. If Nicole Jack cannot escape the school’s waitlist in time, her education will cost the state more than double what they insist they’re trying to save, proving yet again that it’s not about dollars and cents. It’s not about the kids, either. It’s about politics.

For now, Nikesha Hudson is scrambling to put together the money to cover her daughter’s Catholic-school tuition. She doesn’t want to let Nicole down. The governor who claimed to care about her future already did.

— Ellen Carmichael, a Baton Rouge native, is president of the Lafayette Company, a political-consulting firm based in Washington, D.C. She has served as a senior communications adviser for a Republican presidential campaign, members of Congress, and statewide elected officials. This piece originally appeared at National Review

UPDATE: The Archdiocese of New Orleans has confirmed that the number of children in the Big Easy affected is in fact over 200, not merely 17 families as originally reported by the media.