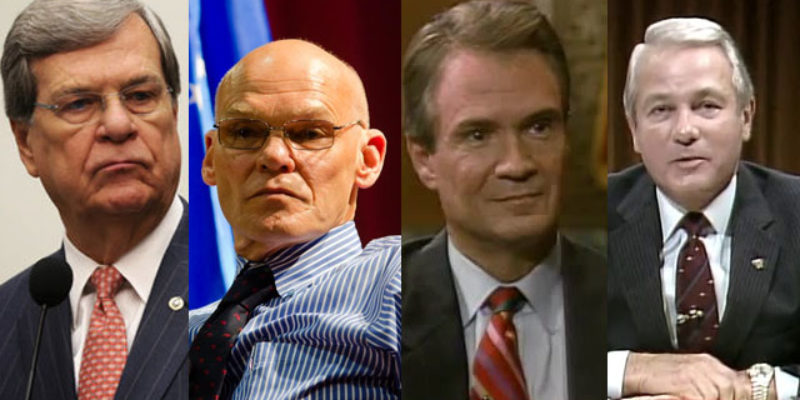 Remember the old Karl Marx quote about how history repeats itself first as tragedy, then as farce? It appears that’s playing out in the Louisiana Senate race with David Duke’s campaign and the reaction to it.

Duke running for statewide office again, 25 years after he embarrassed the state by running for the Senate and then for governor in 1990 and 1991, and ending up with almost 40 percent of the vote in those two elections, is certainly tragedy. But it’s also farce. Nobody is going to vote for Duke this time, regardless of his attempts to ride the Donald Trump phenomenon into some type of renewed relevance. Conservative voters – or even just anti-big government voters – had no credible outlet for their votes in 1990 and 1991 and Duke filled the void as a protest candidate. This year there are tons of outlets for that vote; the frontrunner in the race is one, for crying out loud, and none of them carry with them the history of racism and criminality Duke does.

What else is farce is the “we’re putting the band back together” press release by the old establishment greybeard crowd announcing the return of the Louisiana Coalition Against Racism and Nazism PAC, an organization of all the “respectable” pols from both parties who banded together to support eventual federal inmate Edwin Edwards over eventual federal inmate David Duke back in 1991.

Edwards is one of the names on the press release. So is Buddy Roemer, the incumbent governor who couldn’t get past Duke into the runoff in 1991. So are former Democrat senators John Breaux and J. Bennett Johnston. So is James Carville. So is Sybil Morial, the wife of Dutch Morial and the mother of Marc Morial – two of the more corrupt mayors in New Orleans history. We also have the old Jefferson Parish courthouse mob represented by Newell Normand, whose tactics often smack of the fascism Duke warbles about, and washed up crooks Jon Gegenheimer, the longtime clerk of court and Lawrence Chehardy, the former assessor.

Add in Edwards cronies Billy Broadhurst and Madlyn Bagneris, throw in a pair of old-school political consultants in George Kennedy and Roy Fletcher, various old hangers-on like Rannah Gray, an out-of-state former senator everybody hates like Trent Lott, a few academics like Tulane professor Lawrence Powell, who chairs this thing, and Rice professor Doug Brinkley, and even our buddy Quin Hillyer who was on hand for the first iteration of this anti-Duke hootenanny, and you have something which almost – almost – makes Duke correct when he issued this quote in response to the PAC being formed against him.

“This organization is a who’s who of people I beat in elections,” Duke said Tuesday. “Sell-outs misfits and other radical leftists. Who cares? I’ve had a million, biased negative articles written about me in the last year. People see through this garbage.”

He’s not correct, of course, because he only ever got elected to one term as a state representative and he didn’t beat anybody on the list to earn that seat. Did he beat Roemer? Yeah. He can claim that. Otherwise, no – when you lose elections you don’t get to say you beat the people who opposed you.

But the spirit of what Duke is saying is actually more or less correct. That Trent Lott signed onto something opposing him really isn’t likely to persuade anybody not to vote for David Duke. Ditto for Lott’s partner in at the high-priced DC lobbying firm Patton Boggs John Breaux, Edwin Edwards and his various crooked cronies or James Carville, who shills for the Clintons – the most crooked pols in American history. What moral standing any of these people have to condemn anyone else as unfit for public office is a great question.

Some of the other folks who signed on to this are surely more honorable than Edwards or Carville, but so what? When you lay down with dogs you get fleas.

And when you offer up this cloud of hot air to justify your existence, who’s going to take you seriously?

“The struggle for racial, religious and ethnic goodwill is never really done,” said the PAC’s chairman, Tulane professor Lawrence Powell, in a statement. “And that’s why we’ve decided to reactivate the Louisiana Coalition: to affirm the values of decency and civility against champions of white nationalism and racial anti-Semitism.”

It’s not that these people are wrong. Of course Duke is unacceptable. Even if he wasn’t a clown who went around in a white duncecap spouting idiocy about “Jew bankers” and “miscegenation” he’s still a convicted criminal, and that alone makes him a joke.

But what else is a joke is rallying all these old farts nobody wants to see back in Louisiana politics in an effort to beat back the “rising tide of racism,” or whatever other high-sounding bilge is on offer. If I’m John Fleming or Charles Boustany I’m furious at the idea that Edwin Edwards, Newell Normand and J. Bennett Johnston want to insert themselves into the race I’m in for the purposes of defeating a guy who’s a blip in the polls; that steals media attention that I, as an actual participant in the race one would assume would be more acceptable than David Duke, should be able to garner.

Upon seeing this, our Mike Bayham said “This isn’t about him, it’s about them.” He’s right about that; if we have to have attention whores, let’s have them be the candidates. All this stunt does is make some of the more mainstream people Duke got votes from in 1990 and 1991 remember why they voted for him in the first place.