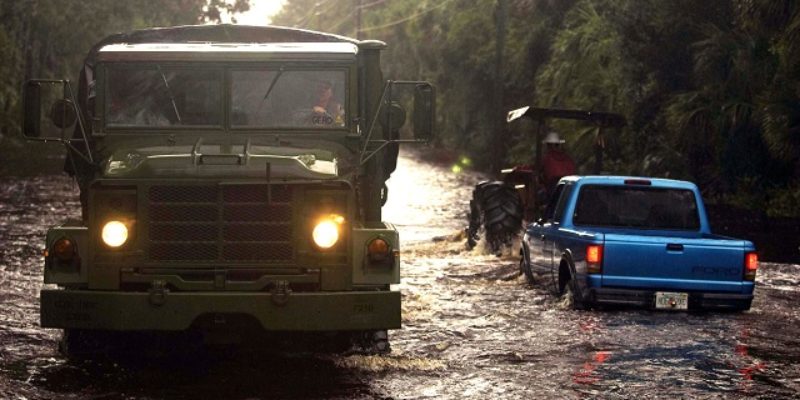 Police militarization has been a hot topic for a couple of years now. But there is no doubt that police militarization, if you define it allowing police departments access to military surplus equipment, has saved lives over the past few days here in Louisiana.

Here are some Facebook posts from the Slidell Police Department and the St. Tammany Sheriff’s Office. The two agencies have been assisting in flood rescue operations both in St. Tammany Parish and other flood impacted areas of the state.

There are more videos and pictures from law enforcement agencies all over the state. These are U.S. military surplus trucks and Humvees, most likely acquired through the Department of Defense’s controversial 1033 Program.

According to DoD, only 5% of the equipment provided through the program are weapons and less than 1% are armored vehicles. Most of the equipment are relatively mundane items like these high water trucks and vehicles. These vehicles can drive on flooded roads that most regular vehicles simply cannot travel.

Does this mean that every equipment request through the 1033 Program is legitimate? No. For example, there is no need for a community college campus police force to have armored vehicles.

It’s also not necessary to equip police officers doing their normal day to day jobs like a solider serving in Afghanistan. There’s also something disturbing about using SWAT teams to bust up poker games. These are the things we need to discuss when we use the catch all phrase “police militarization”, not so much the equipment itself.

But the military equipment Louisiana law enforcement agencies acquired through the 1033 Program is saving lives across the state. We have to factor that in when we debate police militarization.

Interested in more news from Louisiana? We've got you covered! See More Louisiana News
Previous Article VIDEO: Boat Racing In The Streets Of Denham Springs
Next Article APPEL: The Republican Collapse Of 2016