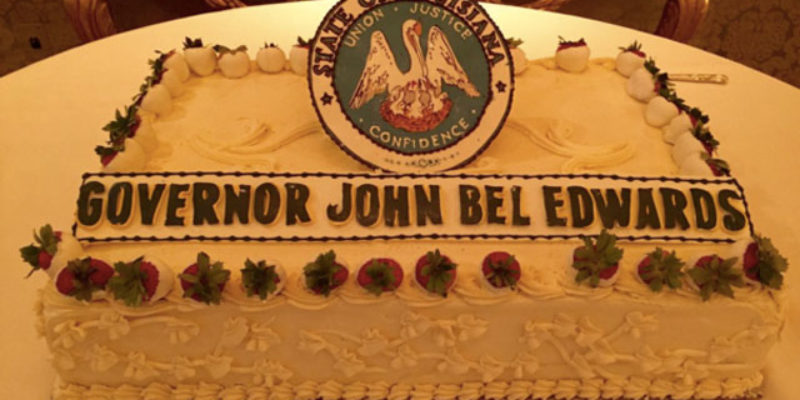 Now we know that it wasn’t open license by Gordon Russell to carry water for John Bel Edwards in his ridiculous piece yesterday, but rather it’s the editorial board of the Baton Rouge Advocate itself which is serving as shill for the governor.

If you’re not familiar with the story at issue, namely the fact that Attorney General Jeff Landry hired a George Washington University and Loyola Law School graduate fluent in Spanish with experience in legal investigations and community outreach work to do legal investigations and community outreach work including in the Hispanic community is somehow cause for outrage owing to the employee’s having been busted for credit card fraud 17 years ago when she was 19 years old, then click here and we’ll tell you the whole thing.

Advocate reporter Gordon Russell wrote an incredibly biased hit piece on Quendi Baloney, the employee in question, insinuating she was hired for a $53,000 per year job for which she’s not qualified because of the 17-year old legal trouble and further that the only reason she was hired was that her mother, Geri Broussard Baloney, endorsed Landry after getting 18 percent of the vote in the primary race for Attorney General.

And today, that paper’s editorial board is out with an op-ed no more factual than Russell’s hit piece.

This is the gist of the op-ed…

When Jeff Landry ran for office, he promised a new way of doing business in the attorney general’s office.

Landry has hired the daughter of a key supporter despite the job-seeker’s felony record.

Landry was endorsed in last fall’s election by Geri Broussard Baloney, the third-place finisher in the primary. It is her daughter who is now on the AG’s payroll.

Landry hired Baloney’s daughter, Quendi, in the office’s fraud section at a salary of $53,000 a year.

Quendi Baloney had been charged with 11 felony counts of credit card fraud and theft in 1999. She wound up pleading guilty to three of them, according to Henrico County, Virginia, court records.

She received a six-year prison sentence, all of it suspended, meaning she would serve time only if she committed another crime. To her credit, she apparently completed her sentence and now says she has reformed; she earned a degree in law in 2008, and has been working at her mother’s law office.

“My daughter working for the attorney general was the furthest thing from my mind when I made the endorsement,” Geri Baloney said. “It wasn’t even a thought.”

Let’s face it – 17-year old legal problems or not, 53K a year for somebody with a degree from GWU and Loyola Law School is dirt cheap. Why isn’t the Advocate applauding Landry for getting employees for below market value?

What’s most disgusting about this is the fact that John Bel Edwards, who more or less controls the Advocate, has done far worse. Landry made mention of Jay Dardenne’s naked selling of his endorsement for a quarter-million dollar salary as the governor’s Commissioner of Administration, and he’s correct in noting that if you want to see evidence of how patronage jobs can be abused to satisfy political debts you don’t need to go any further than that.

Except the Advocate’s editors argue that it’s OK to hire Dardenne and lard him up with taxpayer swag because he’s not a convicted felon.

Fine. What about Larry Bankston? He’s a convicted felon. Why is he the new attorney appointed for the Louisiana State Board for Licensing Contractors?

Bankston, a Democrat and former state senator, had to serve 41 months of a federal sentence on bribery charges involving passing legislation to favor the interests of video poker truck stops in exchange for personal gain – in Bankston’s case, sham rent paid to him for nonuse of his condo in Gulf Shores. That was in 1997; he got out of jail in 2000.

And earlier this year he was appointed to serve as the attorney for the contractors’ licensing board (which we understand carries a six-figure retainer with it). Because there is no potential for corruption in that appointment, compared to hiring Quendi Baloney to do community outreach for 53K a year.

And just in case you’re wondering, yes – Bankston contributed to both Dardenne and Edwards’ campaigns last fall. The president of the contractors’ licensing board, Mike McDuff, was a Dardenne supporter who ultimately backed Edwards.

But you haven’t read any of that in the Advocate, have you? Instead, you probably saw a piece about Edwards doing a ribbon-cutting for a highway project using a federal FASTLANE grant to widen I-10 east of Lafayette and improve the roadway there. There isn’t a single mention of the fact that it was Garret Graves and Steve Scalise who insured the FAST Act’s passage with those FASTLANE grants, or that Graves and Scalise are the reason that money exists to be spent on highway projects; instead, it’s John Bel Edwards who got that cash. It was appropriated before he was even inaugurated, but you wouldn’t know that from reading the Advocate.

You also wouldn’t know from reading the Advocate that this is the second time Edwards has done to Graves and Scalise what Robin Thicke did to Marvin Gaye.

There isn’t even a pretense with this pathetic newspaper anymore. They’ve been in the tank for Edwards from the start. The governor ought to give out subscriptions to that paper to his campaign contributors, because it’s little more than his house organ at this point.

Interested in more news from Louisiana? We've got you covered! See More Louisiana News
Previous Article BAYHAM: Trump’s Supporters Are Much-Maligned, And He Is Letting Them Down
Next Article Terrebonne Parish Sheriff Raids A Blogger’s House Because He Was Criticizing Him