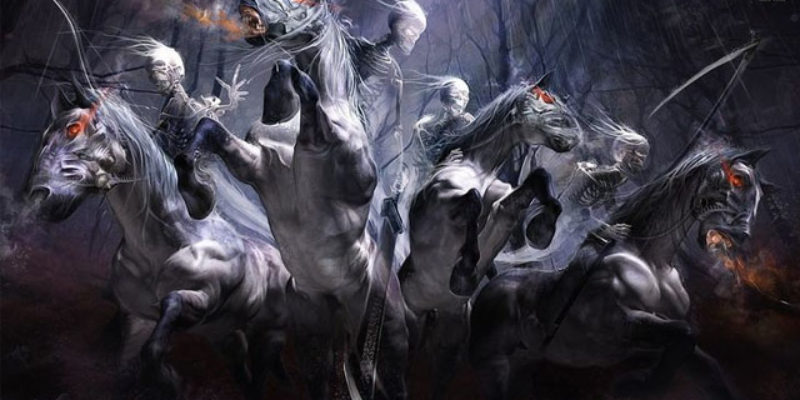 Pestilence, War, Famine, and Death, the Four Horsemen of the Apocalypse were placed in the last book of the New Testament during the hegemony of the detested Roman Empire. Though today mostly viewed in a religious context, the historical implications are overwhelming.

These four great scourges of mankind have been with us forever. Through the millennia mankind accepted the inevitability and periodic repeatability of the visits of the Horsemen. With little understanding of the causes of war, starvation, and disease mankind reached out to magic and to religion as its only defense against these horrors. Man in pre-history painted scenes of wild beasts on cave walls in order to solicit magic to provide meat; ancient Egyptians built monuments to their gods in order to implore that the Nile rise to provide nutrients for their crops; there are innumerable monuments to powerful leaders who fought great wars to keep an enemy away or to capture valuable assets for the people.

In modern times we have made great strides in controlling the hated Four Horsemen but cyclically one or more of them ascends to primacy and is closely followed by the others. In a simplistic sense nature is ever changing and its vagaries bring forces to bare that we cannot overcome. Drought brings starvation, microbial mutation brings on new pestilence, and greed, economic pressure, or just deep seated hatred bring on war.

On this day we memorialize those who were murdered, in what appears to us to have been the senseless 9/11 attack. But to those radical Muslims who carried out the attack it was neither senseless nor murder. These people believed to the end that they were doing the right thing for their people and their god. In other words, they were responding, like so many others throughout history, to that inevitability of the Horseman of war.

Herein lies the true meaning for those of us lucky enough to survive the attack on our people; war, like famine, pestilence, and death, awaits us all. We can hope and pray that this fate passes over us, that we learn to control nature, or that mankind will change. Perhaps sometime these may come about, but sadly that time appears to fall in the distant future.

So the lesson for America is that we must not be naive and we must be ever vigilant. If we want to protect our homeland we must use our immense economic and military power to keep the Horsemen away from our door. That does not mean that we should retreat from the problems of mankind and try to hide behind the great oceans that, in times gone by, have protected us. No, just the opposite, it means that we must assert ourselves around the world; the Horsemen will always be lurking out there and we must be proactive to beat them down.

History has proven that painting animals on a wall or praying for Divine intercession has never been a remedy to the scourges of the Horsemen.

Only by using America’s power; economic, military, and scientific can we face down the Horsemen and keep them at bay. That is the great lesson of 9/11, a lesson that we, at our own risk, must not ignore.