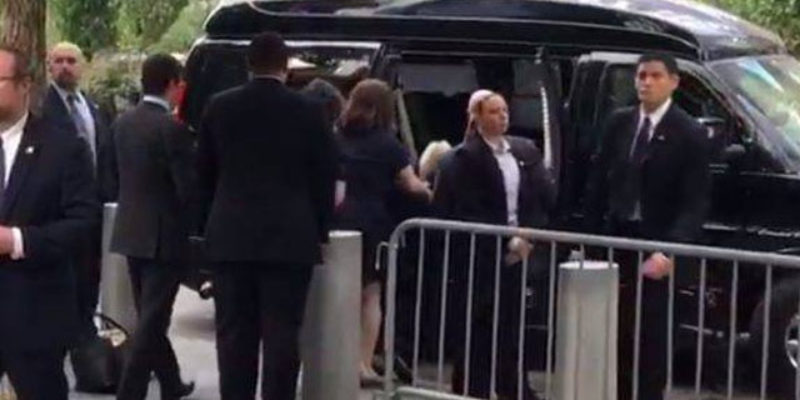 One gets the strong impression that pneumonia is more a symptom than the disease in this case, but in any event…

“Secretary Clinton has been experiencing a cough related to allergies. On Friday, during follow up evaluation of her prolonged cough, she was diagnosed with pneumonia,” her doctor, Lisa Bardack, said. “She was put on antibiotics, and advised to rest and modify her schedule. While at this morning’s event, she became overheated and dehydrated. I have just examined her and she is now re-hydrated and recovering nicely.”

Bardack examined Clinton at her home in Chappaqua after she returned from New York City on Sunday afternoon.

Allergies don’t particularly explain Clinton’s fainting spells, “short-circuits,” tremors or head-nodding – and if she’d been diagnosed with pneumonia on Friday, how come her paid shills put out the story this morning that she “overheated” at that 9/11 memorial ceremony in 79-degree weather?

Her credibility is even sicker than she is.

Turns out pneumonia is a very common symptom of Parkinson’s disease, which we discussed here and here as a possible explanation for the medical circus Hillary has been putting on. In fact, pneumonia turns out to be the number one killer of Parkinson’s patients. From the Michael J. Fox Foundation of Parkinson’s Research website, a blog post by Michelle Ciucci, PhD, CCC-SLP, an Assistant Professor at the University of Wisconsin and a National Foundation of Swallowing Disorders (NFOSD) board member…

Difficulty swallowing, called dysphagia, can happen at any stage of Parkinson disease. Signs and symptoms can range from mild to severe and may include: difficulty swallowing certain foods or liquids, coughing or throat clearing during or after eating/drinking, and feeling as if food is getting stuck.  As the disease progresses, swallowing can become severely compromised and food/liquid can get into the lungs, causing aspiration pneumonia. Aspiration pneumonia is the leading cause of death in PD.

It is important to note any changes to swallowing, because there is opportunity to intervene early and preserve both health and quality of life.  Swallowing disorders are managed by the medical team with a speech-language pathologist and physician. Evaluation typically involves an interview, a physical examination of the head and neck, trials with food/liquid and if indicated, an instrumented examination, either with a moving x-ray, called videofluoroscopy (also known as a modified barium swallow study) or by visualizing the throat with a scope (called endoscopy).

Because Parkinson disease is progressive, swallowing abilities can change over time, underscoring the need for early intervention and frequent follow-up. Sometimes the signs of a swallowing disorder can be subtle, so it is important to be vigilant. If you think you have difficulty swallowing, ask your physician to refer you to a speech language pathologist for a swallowing evaluation.

Does Hillary have Parkinson’s disease? We’re not doctors here; we don’t know. What little we know of Parkinson’s tells us she definitely might. And what we know of the Clintons, which is more than a little, tells us her goons wouldn’t admit it for all the tea in China. Just this morning, knowing she had pneumonia, they tried to sell the B.S. line that she suffered heat stroke in 79-degree weather – when video of her showed she never even took her jacket off.

Instead they’ll insult the people who question her health as kooks and conspiracy theorists while continuing to lie as she takes turns for the worse.

But what we know about the Democrat Party tells us none of them care. If they could hide the fact Woodrow Wilson was half-dead from the American public, and do the same for FDR, this is nothing. So long as power is to be had, anything goes.

Interested in more national news? We've got you covered! See More National News
Previous Article APPEL: On 9/11
Next Article The Real Problem With Hillary Clinton Is Not Her Health, It’s Her Dishonesty