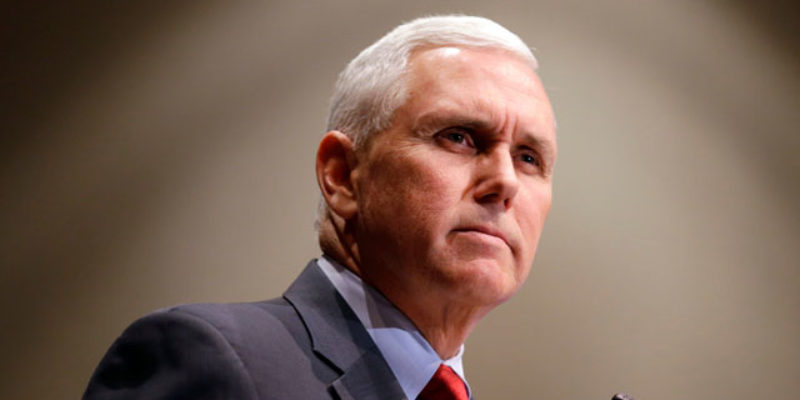 Go to Google and type in “Mike Pence”.

It’s not pretty is it?

The sensationalist…scratch that…deceptive headlines penned by blatantly pro-Democrat established news organizations (not counting the Huffington Post- the leftist advocacy blog does not count as an actual news group) represent the latest new nadir by the media as they continue to lower the limbo pole of journalistic integrity and professionalism.

Veteran CNN Newsman Wolf Blitzer asked the Indiana governor about white supremacists/nationalists supporting the ticket, to which Pence replied, “As I told you the last time I was on, I’m not really sure why the media keeps dropping David Duke’s name. Donald Trump has denounced David Duke repeatedly.  We don’t want his support and we don’t want the support of people who think like him.”

Pretty unequivocal right?  Pence is (once again for the umpteenth time) declaring that Duke is persona non grata in the Trump/Pence camp and neither are his supporters.

Seriously, how often do you hear a candidate for office ever declare to the world they not only reject someone’s endorsement but that of a constituency?

And why is that kind of question almost never posed to Democrats though their operation enjoys the support of quite a few notable rogues and ethnic supremacists.

If the media were truly interested in being fair and balanced, they’d ask Hillary about Louis Farrakhan or Al Sharpton or Bill Ayers every time Trump gets a Duke question.

Blitzer is not satisfied with Pence’s answer, though it addressed comprehensively the question he asked.

Here is where the interview goes from a reporter asking a question to a reporter trying to coerce a person into playing a political hybrid of Twister and Simon Says.

“You would call him deplorable?” not so innocently queried Blitzer.

At this point, Blitzer has painted Pence in a corner: Trump’s team has been exploiting the use of the word “deplorable” by Hillary Clinton to describe HALF of the Republican nominee’s supporters.

It was a Clinton misstep that had busted its way into the news cycle until the Democratic presidential nominee fainted…scratch that…COLLAPSED….while attending a 9/11 memorial.  However Trump, through paid media and public appearances, have made great hay about the matter, particularly as Hillary had spent the past year calling Trump a hater.

Not wanting to use the same buzzword that has become an albatross around Clinton’s campaign, Pence stated that he’s not in the name calling business.  And why should he be?  Pence had already answered the question directly.

The news story from that interview should have been titled: CNN News Figure Commits Journalism Malpractice with GOP VP Candidate.

Instead the multiple heads of the leftist media hydra barked out the same deceit, focusing not on Pence’s absolute rejection of Duke and his backers but on Pence’s refusal to use a particular word to condemn Duke.

Why does the media even bring up Duke as he’s badly trailing in the polls behind several Republicans and Democrats in his bid for the US Senate?

Because he’s a useful distraction that gums up Republicans.

Every time Duke is needlessly brought up by the press that’s one less opportunity Republicans have to focus on their solutions and the flaws of the other side.  And like a Kardashian, every time Duke is mentioned he becomes relevant.

Compare the amount of publicity Duke has received in 2016 to any of his other well-funded, better organized and more credible Republican opponents for US Senate.  The media has served as Duke’s de facto public relations machine at no cost to nor effort by him.

It’s transparent what the media is doing and shameful.

Some Republican leaders believe they can deftly dance around the media’s belligerence, by dipping here and accommodating there.

To describe the media as biased is a gross understatement; they’re committed partisans.  They’re not interested in the facts but how they can arrange the pieces to craft a story that either covers up for the Democrats or injures the GOP.  If they have to slyly toss out a few pieces that just won’t fit, so be it.

Instead of viewing the established media has misguided ne’er-do-wells, Republican leaders should consider them what they are: every bit as much of an adversary as the Democratic Party they seek to advance and protect.

How should the GOP handle a hostile media?

Prepare for any interview with a reporter as if it were a public debate with a Democratic opponent. Anticipate the questions and how certain answers will be intentionally distorted.

Build dossiers on their absurd reporting practices and throw the files at publishers, editors, and news directors when they try to manufacture unfavorable news events and stories.

When they keep asking the same question over and over again to keep something irrelevant yet inconvenient on news cycle life support, hand them a prepared statement from the first time it was issued with a blank space to write in the number of times the question was asked.

And finally, aggressively push back.  Concisely spell out what the media is doing and refuse to take questions.  The less you say, the easier it is for targets to control the narrative as reporters are stuck having to work into their stories a limited yet comprehensive statement on the matter.

While the decidedly leftist media might feel justified in how they go about their business since they earnestly believe Republicans are bad or misguided people, perhaps they will begin to feel a bit more self-conscious if they are made aware the degree of their unethical behavior.

The established media has demonstrated for decades that they are simply varying channels of the same content and leftist narrative.

Republicans must learn how to prevail over the media on the airwaves and in print before they can expect to beat the Democrats in the voting booth.

Interested in more national news? We've got you covered! See More National News
Previous Article Why Is The Advocate Turning To David Duke’s Campaign Manager For Political Analysis?
Next Article VICTORY: Disney Pulls Blasphemous “Gumbo” Video. The Nightmare Is Over.