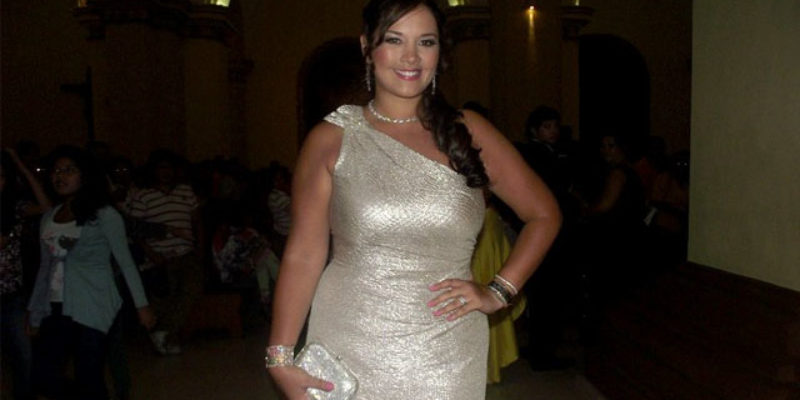 Who is Alicia Machado? She’s the Venezuelan beauty queen who Donald Trump derided as fat, and whose cause Hillary Clinton took up in Monday’s debate to prove what a sexist pig Trump is.

But it doesn’t look like Hillary’s camp did a whole lot of vetting on the Miss Universe contestant before she dragooned Machado into this election cycle, and the results are more than a little embarrassing.

It isn’t often we refer to Radar Online here, but we’re doing it today.

Hillary Clinton could regret recruiting former beauty queen Alicia Machado for her campaign: RadarOnline.com has learned that the one-time Miss Venezuela, who is now appearing in Clinton’s campaign ads, has a bloody secret past!

Venezuelan police claimed that in Nov. 1997, the beauty queen acted as her lover’s accomplice in a brutal murder attempt.

It all started when the sister of Machado’s boyfriend at the time, Juan RodriguezReggeti, committed suicide. Reggeti reportedly blamed his brother-in-law Francisco SbertMoukso for driving the woman to her death, and brooded over how to enact his revenge, authorities in Caracas said. Then, at his sister’s funeral, gunfire was unleashed and his brother-in-law was shot twice outside the El Cafetal church in Caracas.

The victim suffered brain damage after the bullets punctured his skull. The gunman made a high-speed escape and Machado was accused of driving the getaway car! “Our accusations against Alicia Machado are based on coinciding testimony from witnesses, who place her in the vehicle in which Juan Rodriguez fled the scene,” the victim’s lawyer said at the time.

Machado breezed into court to answer the shocking charges, and insisted, “There has been a gross exaggeration. The situation has caused me great sadness.” She claimed that people were taking advantage of her name to create publicity.

Her lawyer said that she had an alibi: As an aspiring actress, Machado was taping her first episode on a Venezuelan soap opera until late at night the day of the shooting. “Alicia Machado never was present at the scene of the crime, neither before nor after it occurred,” her attorney added. “It was simply a fight between members of two families and nothing more.”

Turns out Machado managed to get exonerated in that case, but it was extremely embarrassing to the whole country and, as you might imagine, the Miss Universe pageant as well.

Then she put on a bunch of weight…

Machado had packed on the pounds after winning her beauty title, and Trump demanded she get back in shape. Trump, who co-owned the pageant at the time with CBS, was so alarmed by her behavior that he called her “an eating machine,” and said, “Quite frankly, we’re happy to see her reign end.” He also reportedly called her “Miss Piggy,” a point Clinton harped on in the debate.

Machado was accused of gaining 70 pounds after winning the international beauty competition, but said in 1996, “I have gained only 6 pounds. And I only gained that much because, as Miss Universe, I’ve traveled all over the world and I’ve been eating all kinds of different foods that I’m not used to.” She added, “I’m only human and it’s only natural to expect that my weight would change a little bit.”

The 5-foot 7-inch stunner admitted she went on a crash diet and vomited up her food to stay thin during the 1996 pageant, winning the title at 116 pounds. But once the pressure was off, Machado let herself go and ate everything she craved, including pasta, chocolate and arepas, a buttery corn pancake made in Venezuela.

Machado was furious when Trump alerted the media to watch her sweat through her workout routines, calling it “bad taste.” And Trump replied that Machado “was a big disappointment as a representative of the pageant.”

The thing is, and we expect most people to understand this, a beauty queen who wants to make a living as such can’t get fat. If she does, she’s going to be like the quarterback who throws four interceptions in a game. Both are obviously good at what they do – if you win major pageants, you’re obviously not ugly and if you’re in the NFL you obviously are a pretty good football player. But within the context of your activity, and by the standards set for you as a pageant winner or an NFL player, you’re obviously falling short. Fans say that the quarterback who throws the interceptions “sucks,” and they’re not wrong. And the owner of the pageant who watches a beauty queen squander her looks on food, such that people see the pageant winner and say “meh” as to her good looks, isn’t wrong for criticizing her.

That she’s driving the getaway car after an attempted murder doesn’t exactly make her sympathetic.

“Everybody has a past?”

This election is a debauch, and it’s been a debauch for a long time. That a major American political campaign is using a surrogate who drives getaway cars for attempted murderers and threatens judges, because she has value as a victim of “fat-shaming,” shows just how far down the tubes we are.

Interested in more national news? We've got you covered! See More National News
Previous Article VIDEO: Alton Sterling’s Family Thinks The Police Made It Flood In Baton Rouge
Next Article Another Example Of An Unhinged Loon Democrat Misbehaving In Public, This Time On A Plane With David Clarke